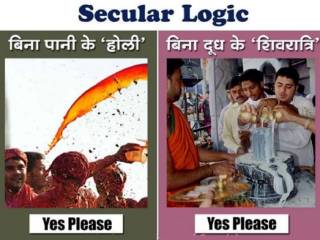 Whenever there is a Hindu festival around the corner there is a spate of social media posts, videos and forwards calling the particular festival (no matter which one it is!) regressive, detrimental to the environment or wasteful. It is also accompanied by advice on how to celebrate the festival in a ‘meaningful way’. The interesting thing is that the people dishing out the advice have neither studied the origins of the festival, nor do they understand the spiritual meaning underlying the rituals. So what gives them the right to dictate the terms by which Hindus should celebrate our festivals and rituals? Unfortunately, since Hindus do not counter this propaganda, the trend which started against a couple of festivals like Deepavali threatens to engulf all the Hindu festivals (as we shall see below). We have published this short guide to make Hindus aware of the propaganda and the truth. 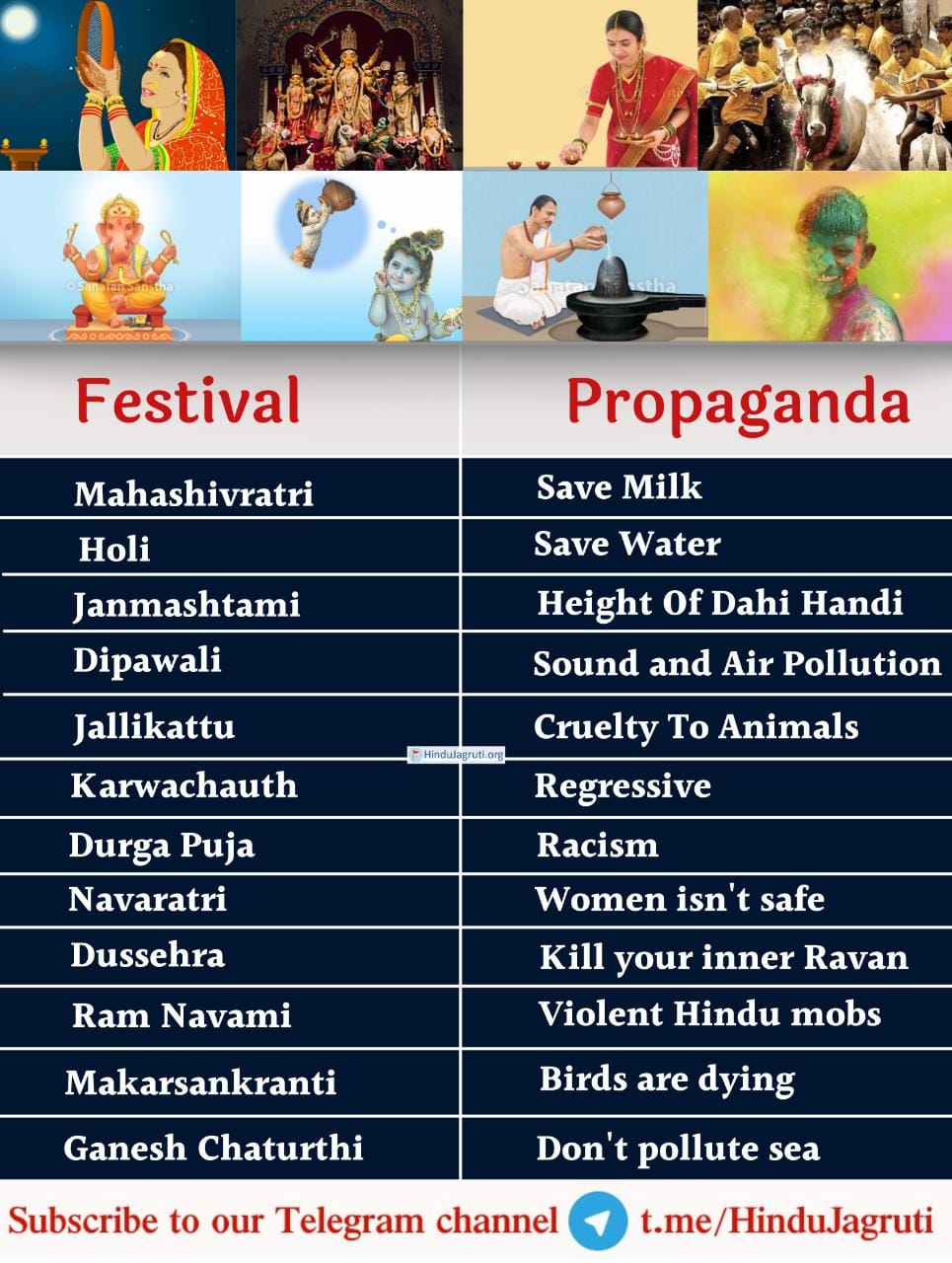 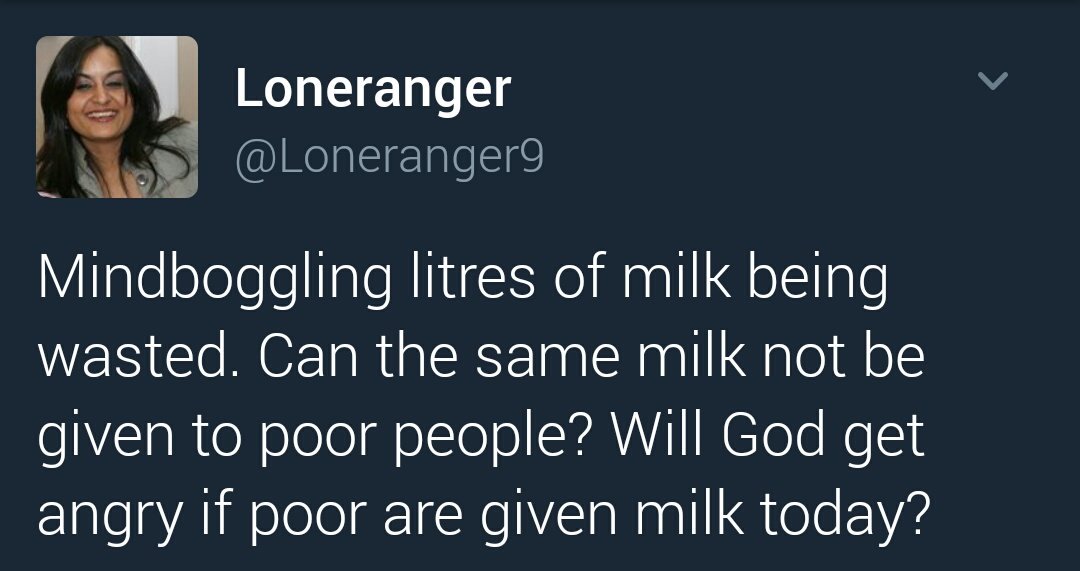 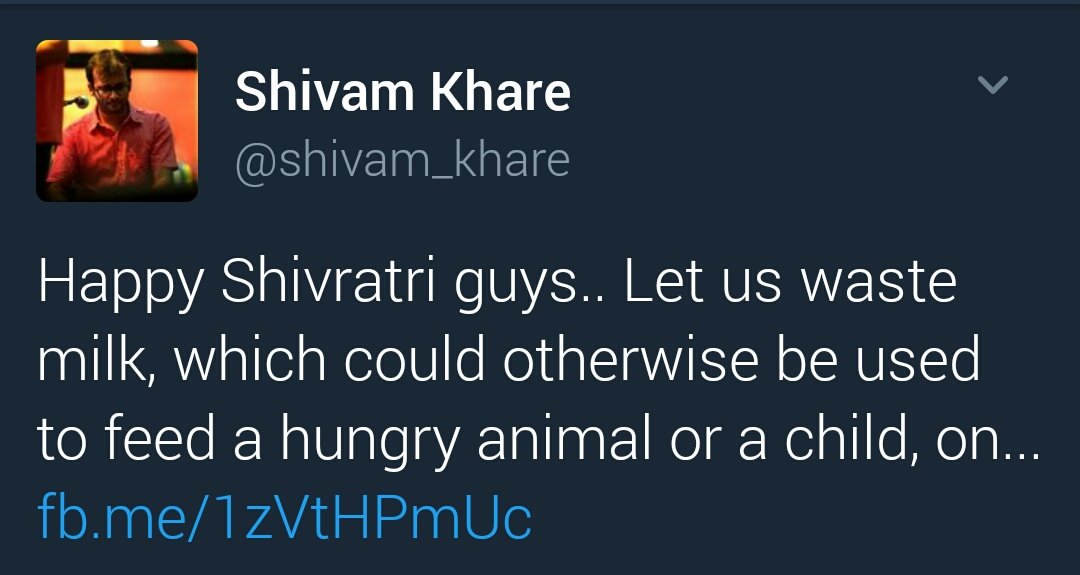 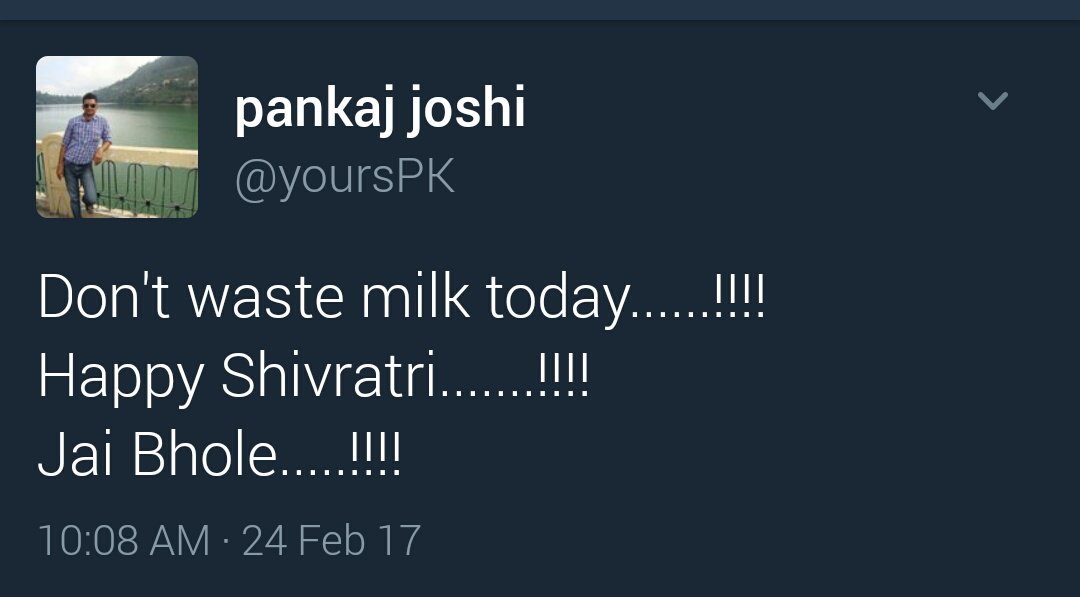 Donating to the truly needy is one of the fundamental duties of the householder in Hindu Dharma. But Dharma also prescribes certain actions which are beneficial for the spiritual uplift of the individual. The spiritual reason for offering milk is that on this day the Shiva tattva is awakened. And milk is able to attract this. This milk is then taken as teerth by which the individual can also benefit from the Shiva tattva. 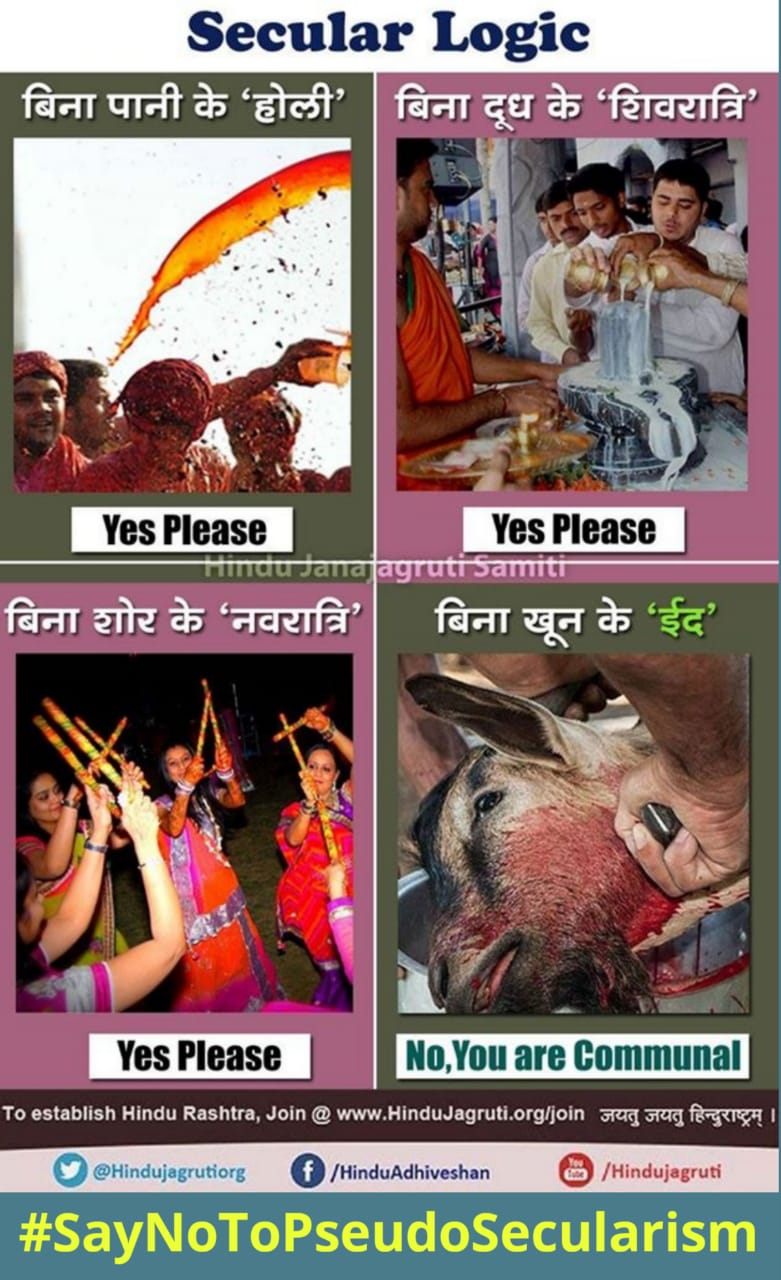 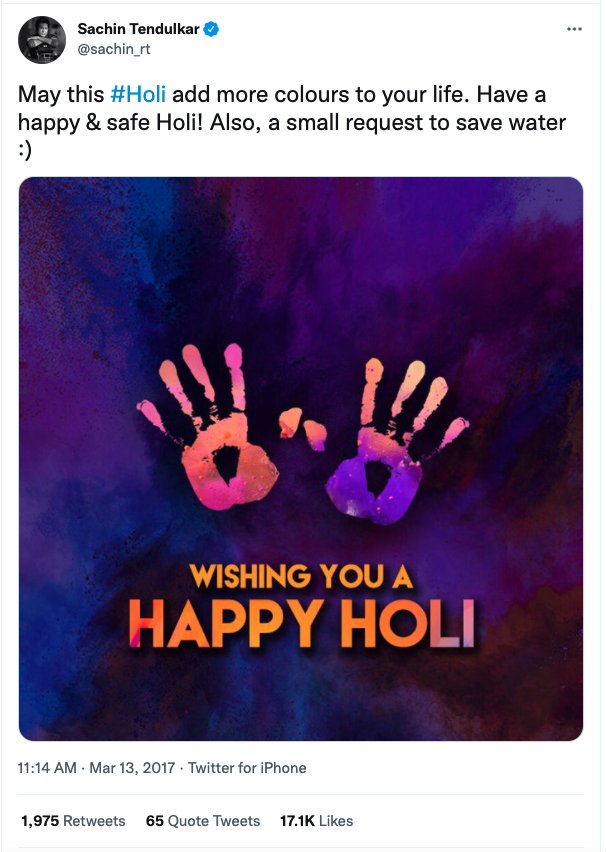 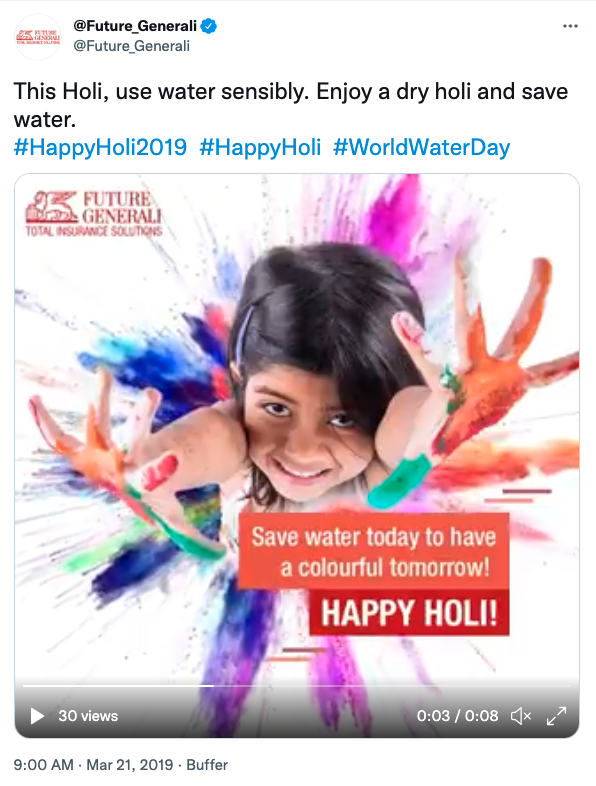 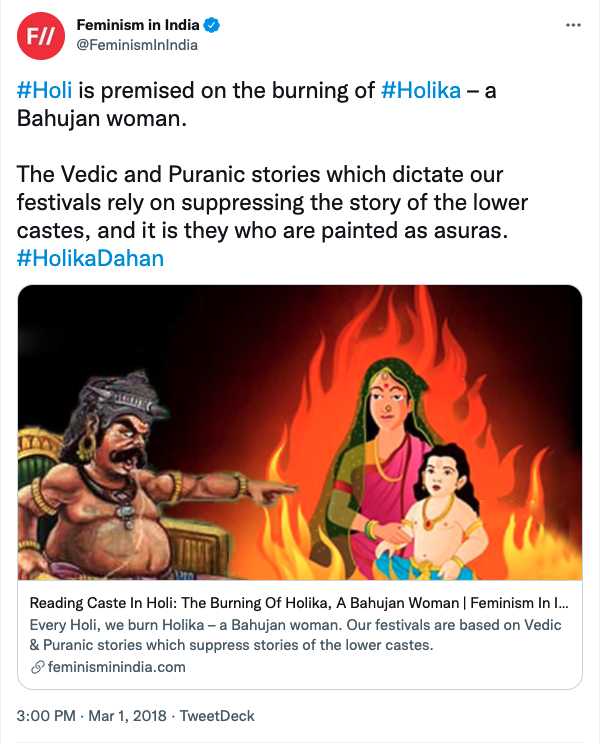 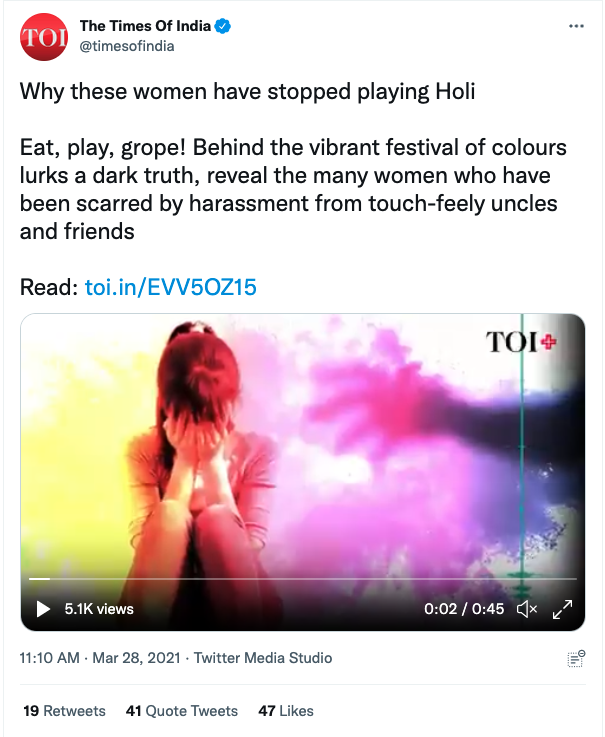 Every Dharmik festival is in tune with nature. Holi is celebrated to welcome the spring season. As such celebrations include throwing gulal and coloured water on each other. Before criticising this part, it is important to know that playing with colours is called Rangpanchami which comes after the actual Holi celebrations. In the actual Holi celebrations, a ritualistic fire is worshipped which reduced the Raja-Tama frequencies in the atmosphere. This helps the Divine frequencies to come nearer to us. To welcome these divine frequencies with pomp and gaiety, colours are used. It is a form of worship. Another frequently used tactic is to highlight that women feel unsafe due to molesters. While molestations are not to be tolerated, the media is guilty of highlighting stray incidents as though they are the norm. This only serves to enforce a negative sentiment about a spiritual festival.

3. Janmashtami – How can you pray to a womaniser? 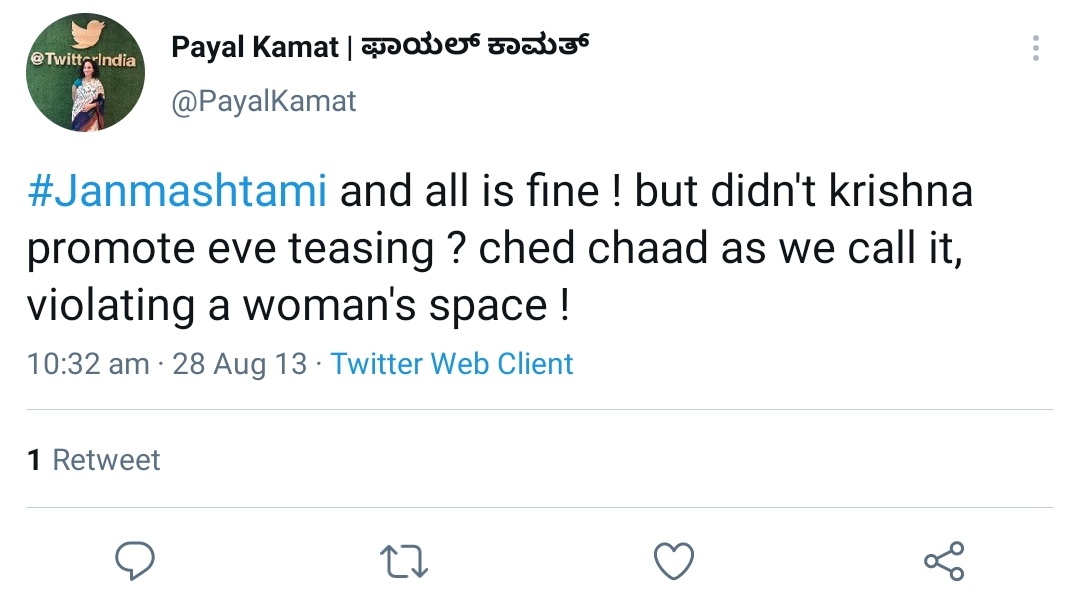 Every Krishna Janmashtami social media is flooded with tweets, posts and memes that Bhagwan Shrikrishna was a womaniser. Frequently used examples are ‘He wedded 16008 women’, ‘raasleela’, ‘he abducted Rukmini’. Again, these arguments are based on a shallow (almost non-existent) understanding of how God and His Divine Plays function.

For clarifications, read these articles –

PETA (the People for Ethical Treatment of Animals) is probably the most vocal opponent of the traditional Bull run (Jallikattu). Many animal rights activists come out and vociferously protest Jallikattu claiming that the bulls are tortured prior to the event. What they fail to understand is while there may be scary incidents, they are not the norm. The bulls used in the  bull-run are prized and help maintain genetic rigour. Unlike the Spanish bull fighting where the matador kills the bull with a sword, the young men participating in Jallikattu only depend on their bare hands and wits to tame the bull. The feared bulls are treated with the respect they command. 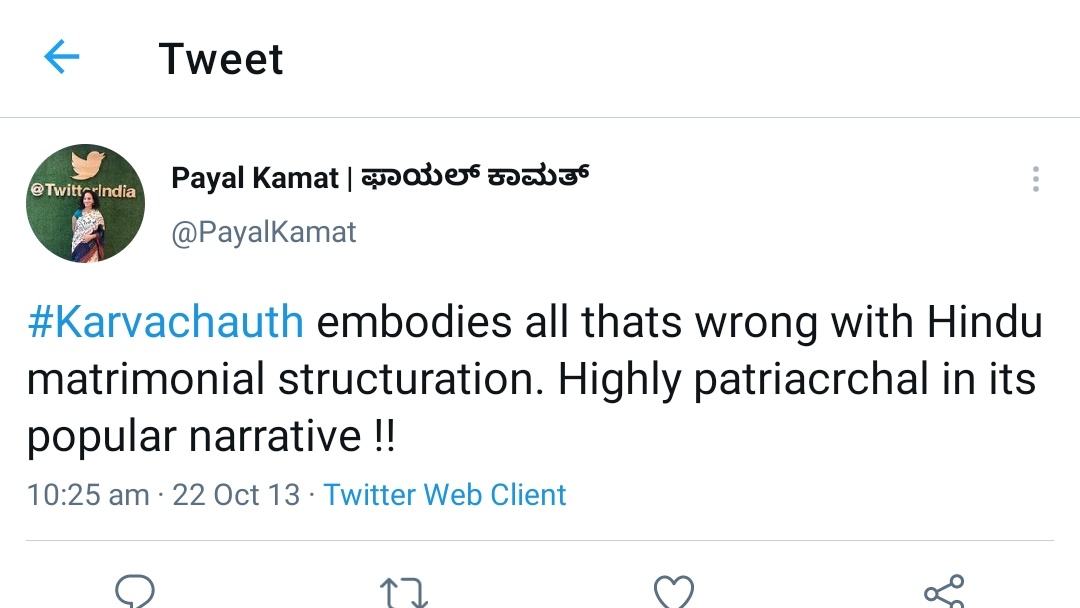 Every Karwachauth the liberal gang attacks the ritual by asking why the wife should fast for the husband while the husband gets to eat what he wants!

Only two words are required to describe the Hindu woman – austerity and compassion. It is these qualities of Sati that brought Satyavan back to life. It is to strengthen these same qualities that the Hindu women follow the ritual of Karwa Chauth.

Vested interests, so called activists have recently begun claiming that Mahishasur was a Dalit King, that he was a ‘just and noble’ ruler. And that he was killed by ‘Durga’.

It is amusing that the same activists will say that Hindu scriptures and history are fictitious and in the same breath turn around make up stories and call our Deities such derogatory terms.

During Navaratri the above images are widely shared. Vested interests have been trying their best to label India the ‘rape capital of the world’ (while it is not). ‘Women are called Goddesses and also molested by the same people’ is repeated ad nauseam.

Women face atrocities because of lack of Dharmashikshan, because children and youth are not imbibed with the right sanskars. The Navaratri is a celebration of the Adishakti in her various forms. Each form teaches us something. Worshipping each form releases us from these bonds that bind us and takes us closer to God.

Every Dussehra (Dasara), Hindus are advised not to burn the effigy of Ravan but ‘vanquish the inner Ravan’ (symbolic celebration of Dussehra). What these multinational companies and so called social media influencers will not tell you is what the inner Ravan is. They don’t follow the life of Shriram, they don’t know what ails the human soul, yet to be politically and socially relevant, they advise Hindus what to do during Dussehra.

9. Ramnavami – not an ideal man, jai shri ram is a war cry 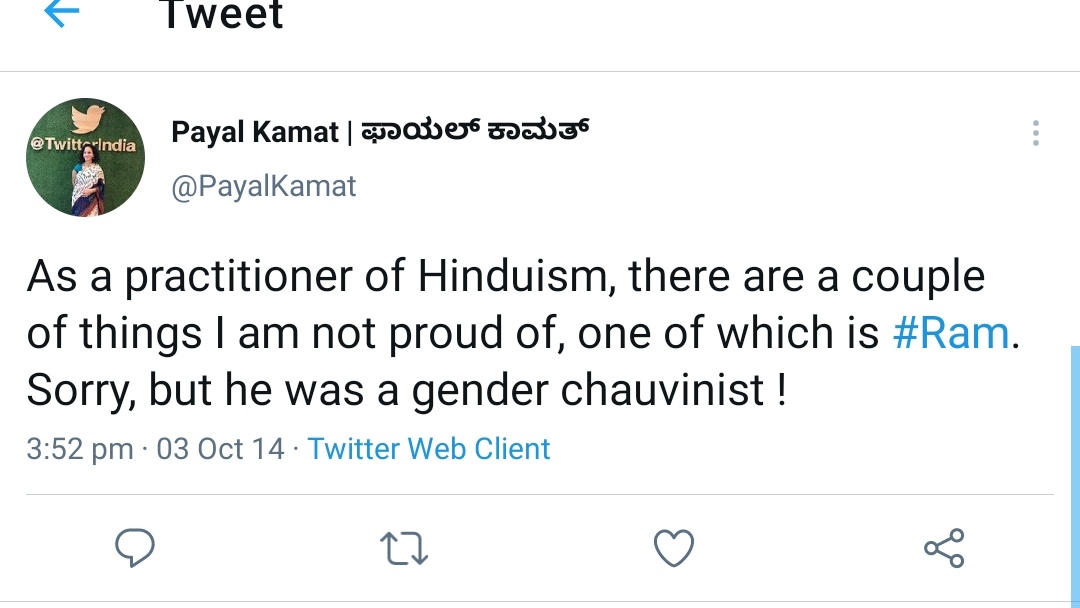 People who raise such questions are like kindergarten children trying to understand 12 grade physics. By superficially reading the scriptures and trying to fit them into modern day ‘sensibilities’ (which again have no Dharmik or moral basis), such people intentionally try to malign the image of Shri Ram. To such people – read, understand and live by the teachings of the scriptures by shedding your biases. That is the only way you will get to experience their greatness. 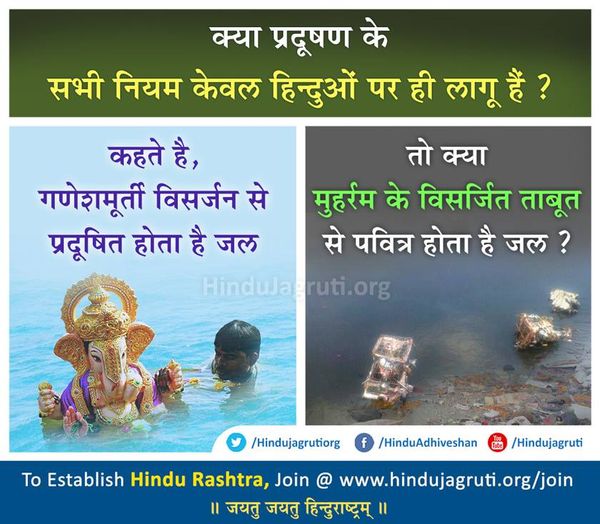 a.      Use papier mache Ganesh murtis

b.      Use Ganesh murtis made of Cowdung

c.      Use Ganesh murtis made of mud with seeds in them, bury the murti to grow trees

e.      If you want to immerse the murtis, do it in a bucket and plant something in that soil.

What these self-professed environmental activists should first try to learn what the Hindu scriptures have to say about murti-vijnan (the science of creating a murti) especially regarding the Ganesh murti that is instated during Ganesh Chaturthi. Our scriptures clearly mention that the murti should be of clay, with natural colours. The murti should be immersed in flowing water so that the Tattva of Shri Ganesh that the murti has imbibed spreads in nature. Do not fall prey to these adharmik ideas.

So you see, the hypocrisy is in dishing out advice during Hindu festivals in the guise of wishing Hindus.

Perform your duty unto Dharma !

Hindu Dharma under attack – how many times have you come across this term? But every time a devout Hindu raises this concern, the complacent Hindus will counter it with a ‘Hindu Dharma has existed for thousands of years and will continue to do so. No propaganda can destroy Hindu Dharma’. But what the complacent Hindus don’t realise is that water drops can erode even the toughest rock. These relentless attacks similarly erode the faith in young impressionable minds. So it is our Dharmik duty to counter this propaganda with equal fervour. So let us all pitch in and perform our duty unto Dharma!

Special online discussions on the topic of ‘False propaganda about Hindus’ festivals and scientific importance of the festivals’!

Hindus should resort to financial boycotting of the companies which are spreading disinformation through advertisements released during Hindus’ festivals ! – Mr Chetan Rajhans, the spokesperson, Sanatan Sanstha

All festivals, religious or non-religious, under Sanatan Hindu Dharma are eco-friendly and benefit mankind, but the communists, jihadis, missionaries, film stars, secular and atheists purposely start campaigns targeting Hindu Dharma. In the ‘PK’ film, Amir Khan says that a stone (Shiva-pindi)’ doesn’t drink milk and it should be given to the poor. He, however, doesn’t advise to donate a ‘Chadar’ to the poor instead of on ‘Majar’ as dead bodies don’t feel cold. It is advised to save water when the ‘Holi’ festival is to be celebrated and it is advised to avoid air pollution as Diwali approaches. At the time of every Hindu festival, such propaganda is made. ‘PETA’ activists advise not to fly kites on the occasion of Makar-Sankranti because birds die due to kites, but they don’t say anything about maximum birds dying during the whole year due to the use of mobile phones/ towers. Hindus should unite and rebuke the objections raised by anti-Hindu Dharma factions on social media at an ideological level. Hindus should financially boycott those who are spreading disinformation through advertisements. Only then, nobody would dare to ridicule and defame Hindu Dharma, stated Mr Chetan Rajhans, the national spokesperson of Sanatan Sanstha. He was speaking in an online program organised by Hindu Janajagruti Samiti (HJS) on the topic of ‘False propaganda about Hindus’ festivals and scientific importance of the festivals’.

Mr Deepak Goswami, the founder of ‘Gyanam Foundation’ from Jaipur said that Hindu Dharma is targeted in films. A priest is shown as a rapist while a notorious criminal is shown as saying ‘Jai Bhavani’; therefore, Hindus are confused, misled and they drift away from Dharma. Hindus will not fall prey to such false propaganda if proper education on Dharma is imparted to them. Hindus should boycott films that attack Hindu Dharma. Our Hindu Dharma, culture and festivals are based on science; therefore, even western countries are trying to adopt them. If Hindus realise it, they would not get drawn to other sects.

Mr Ishwarprasad Khandelwal, the national President of ‘Lashkar-e-Hind’ said on the occasion that people lack true knowledge of Hindu Dharma when they claim that animals are harmed during festivals like ‘Jalikattu’, ‘Nag-Panchmai’, etc. Not only Deities but animals, birds, nature, etc are also worshipped in Hindu Dharma; so, how will the animals be harmed? Secularism and the Judicial system exist in India only because of Hindu Dharma. Why is nothing ever said about the harm caused to animals during festivals of non-Hindus? Ban is imposed on bursting crackers during Diwali festival, but did anyone object when crackers were burst during IPL matches or when Aryan Khan was released on bail? Only Hindus’ customs and traditions followed in ‘Dahi-handi’ and Shri Sabarimala Temple etc are objected to. All these things are happening systematically. Hindus should unite and oppose such things.