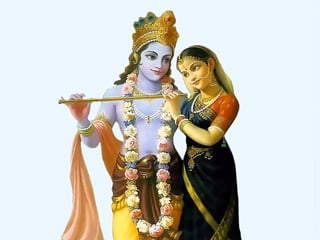 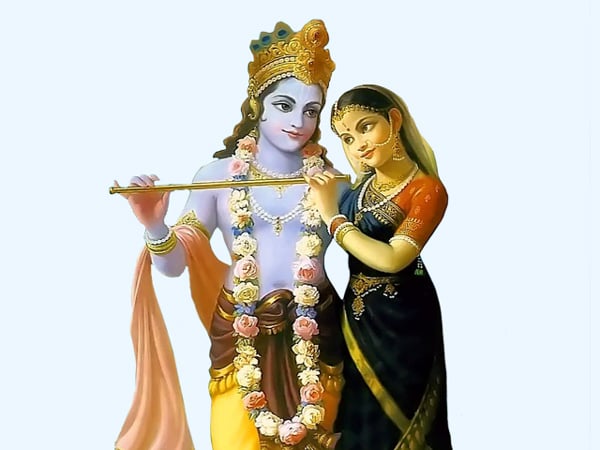 Shri Krushna belonged to the royal dynasty while Radha to an ordinary cowherds family. Like Sita, she too was born out of a resolve (sankalpa).

Radha is the manifest form of devotion unto Shri Krushna. In response to the question ‘How devoted should one be ?’ the Naradbhaktisutra writes ‘Like the gopis (wives of the cowherds) of Vraj (यथा व्रजगोपिकानाम्‌)’. Krushna Himself sent His great friend Uddhav to the gopis to teach him what devotion meant. The incident goes as follows –

To display the devotion the gopis had towards Him, once Shri Krushna pretended that He had severe chest pain that was not responding to any medicine. Then, He Himself suggested to Sage Narad that this pain would go away with the application of the dust from beneath the feet of a devotee, but added that the one giving this
dust would lose his life. After hearing this, no one was prepared to give the dust from beneath his feet. Seeing that the Sage was unsuccessful in his attempt, Shri Krushna suggested that he go to Gokul. On entering Gokul when Narad narrated this to the first gopi who had come to the banks of the Yamuna to fetch water, she
immediately took the dust from beneath her feet and gave it to the Sage saying, “I do not care if I die; but, to overcome the threat to the life of our God, please take this dust to Him quickly”. She requested Him to go to Shri Krushna at once and did not allow the Sage to waste time in talking to her. When Shri Krushna applied the dust given by the gopi His chest pain stopped. Later, Shri Krushna said to Sage Narad that even the dust beneath His feet would have sufficed. Needless to say, the gopi who gave the dust for Shri Krushna did not
die. The devotion of the gopis is an illustration of Parabhakti (Ultimate devotion), Radha being the jewel in the crown.

3. Futility of misinterpretation of the Radha-Krushna relationship

The sound of the flute means the anahat sound. That sound had maddened all the gopis (wives of the cowherds). So one will realise how highly spiritually evolved they were. When leaving Gokul, Shri Krushna gave His flute to Radha and never played it again. Thus He made sure that She constantly got the spiritual experience of Absoluteness (Purnatva) which is superior to anahat sound.

A. ‘Water flows from a higher to a lower level. It is called a stream (dhara). When the letters of the word dhara (धारा) are reversed the word becomes radha (राधा). That stream which flows from below upwards is called radhagati. When it reaches the origin, it gets a spiritual experience of being Radha Herself. Acquisition of this state itself is called “blending into zero” or “sainthood”. In other words Radha and Shri Krushna were one and the same. Shri Krushna had Himself assumed Radha’s form to love Himself. Hence although Radha had merged into Shri Krushna, She continued to worship Him for the sake of guiding the other gopis, that is attitudes. One will think that once a gopi reaches the zenith she will see several Radhas. Those following Radha, that is those seekers following the Path of Devotion will see only one Radha because there is no duality in spiritual love, only non-duality.’ – H.H. Kane Maharaj, Narayangaon

B. According to the Tantrik and Vaishnavite sects Rukmini representing the Energy of opulence is one of the two Divine Energies (Shaktis) of Shri Krushna while Radha is the Blissful Energy (Ahladini).

C. ‘Radha was first created in the Go region (Golok) and then became Shri Krushna’s lover. Later She was born in Vrundavan to the cowherd (gopa), Vrushbhanu and became the idol of the devotees in Vrajamandal. She married a Vaishya (businessman) youth named Shashan; actually it was only Her replica which married him. Keeping Her image in Her physical body Radha left that body and merged Herself into Shri Krushna’s heart in Her primal form.’

The word rasa (रस) has originated from two sources – (रसानां समूह:) means the collection of nine rasas and (रस: उत्‍पद्यते यस्‍मात्‌) means that from which ras is generated. The rasa dance (rasakrida) is a beautiful event in the lives of Krushna and the gopis (wives of the cowherds). During the dance Krushna endowed them with the spiritual experience of non-duality (advait).