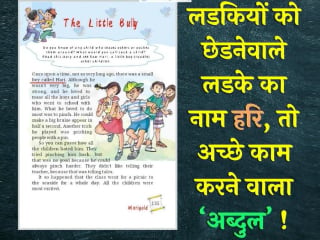 NCERT has been reflecting Hindu grudge since last 14 years

Hindus feel that the Central Government would realise and change this situation immediately – Editor, HinduJagruti.org

New Delhi : The chapter ‘The Little Bully’ in V standard’s English text book, Marigold, by NCERT has been deliberately trying to insult the Hindus Deities for the last 14 years. Similarly, in another book, a boy named ‘Abdul’ is depicted as a nice boy.

1. This book was compiled in the year 2007 under the guidance of Anita Rampal, Chairperson of Advisory Committee for Text Book at the Primary Level. It has insulted Hindu Deities by using the name ‘Hari’ of Shri Vishnu for a bully. In the story ‘The Little Bully,’ a boy named ‘Hari’, teases girls, pulls their braids, and bosses over them. So, the girls are afraid of him and hate him. At the end, a crab bites him and teaches him a lesson.

2. The book ‘Chimney Corner Stories’ by Britain’s Enid Blitton has a chapter ‘The Little Bully’. In the original story, this boy’s name is Henry. NCERT has taken this chapter and re-named ‘Henry’ as ‘Hari’. Through this the Hindu Deities have been insulted.

Book showing Abdul to be a good boy!

In NCERT’s EVS book of IV standard, some chapters have the character named ‘Abdul’. He does everything good and always helps others. In chapter 27, ‘Chusky Goes to School’, Abdul assists a handicapped girl to go to school. Likewise in chapter 19, ‘Abdul in the Garden’ Abdul helps his father in gardening.

#CleanNCERT started trending on Twitter this time and NCERT chief also came under target of people. By getting #CleanNCERT trending on social media, users exposed the material through which wrong education is being given to the students. People are telling that what should be taught in NCERT and what is being taught to us.