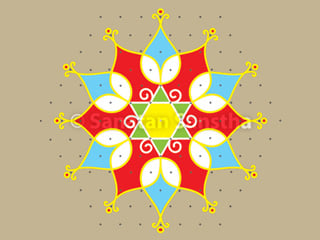 Rangoli is an art which precedes sculpture and painting. It is both an auspicious and a preliminary necessity in any religious ritual. All festivals in Hindu Dharma, including religious rituals, are related to Deities. It is a practice to draw Rangoli at the site of any auspicious religious ritual such as a holy festival, a religious festival, an auspicious function, ritualistic worship, a vowed religious observance, etc. The Principle of a specific Deity is present in the atmosphere in a larger proportion on the day of the festival or is attracted to the venue where religious rituals of that Deity are being performed. Since these rangolis are able to attract and emit the specific Deity’s Principle, the atmosphere gets charged with the Principle and everyone benefits. In the ancient times it was a practice to sweep and sprinkle every doorstep with cowdung everyday and draw Rangoli.