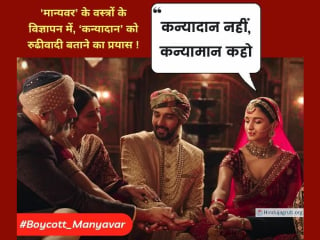 Warning by HJS to ‘Manyavar’ brand

‘Vivah Sanskar’ is an important ‘Sanskar (Vedic rituals)’ under Hindu Dharma and ‘Kanyadaan’ is the most sublime religious ritual of the marriage sanskar. Even then, ‘Vedant Fashions Ltd’ Company has recently released an advertisement for ‘Manyavar’, a famous brand of readymade clothes wherein it has been tried to portray that ‘Kanyadaan’ is a wrong ritual, ‘Kanya’ is not something to give as offering etc . It is also suggested in this advertisement that the tradition should now be changed by naming it as ‘Kanya-maan’ instead of ‘Kanyadaan’. This advertisement misrepresents the religious ritual in Hindu Dharma, insults Hindus’ religious acts, and hurts the religious sentiments of Hindus. Hindu Janajagruti Samiti (HJS), therefore, condemns this advertisement. The ritual of ‘Kanyadaan’ under Hindu Dharma is basically to honour a girl; therefore, it is ‘Kanya-maan’ only. Vedanta Fashions Ltd. should withdraw this advertisement immediately and render an unconditional apology to Hindus. We appeal to all Hindus to boycott ‘Manyavar’ brand till it is not done, informed Mr Ramesh Shinde, the national spokesperson of HJS.

Recently fashion brand @Manyavar_ came up with a new advertisenent that featured @aliaa08. The ad says let's do away with the 'Kanyadan' and let's start with the 'Kanyaman'

So with this ad, these people want to prove that Hindu Dharma is 'regressive' ! 1/2#Boycott_Manyavar pic.twitter.com/J792JUsd9F

It has been shown through this advertisement that the ritual of  ‘Kanyadaan’ is in a way an insult to women when it is not so. Under this ritual, a promise is obtained from the bridegroom. The girl is not given as an object; in fact, the father of the bride gives his daughter’s hand in the hand of the bridegroom and says that ‘this is a gift given to me by God; my family prospered due to her and that gift I am handing over to you. She is going to help in growing your family lineage; therefore, do not insult her through any of the 4 ‘Purusharthas’ viz. ‘Dharma, Artha, Kaam and Moksha’; be loyal to her and live happily with her.’ On this, the bridegroom promises, ‘Naaticharaami’ which means he will not break the promise given to the father through this ritual. Such is the sublimity of this ritual; but showing off the so-called progressiveness, this advertisement is an attempt to defame Hindu Dharma by misleading people.

The respect given to women under Hindu Dharma is not found in any of the other religions. Moreover, in some of the established religions, women are not even treated as human beings. A woman is worshipped as Devi under Hindu Dharma. Every religious ritual needs a wife along with the husband; even then, Hindus are targeted. An ideology exists here; under which different customs are followed like ‘halala’, ‘triple talaq’, polygamy, etc, and a woman is even considered as a witch. Still, nobody dares to even condemn such customs; let alone making an advertisement ridiculing these customs. A case should be filed against ‘Vedant Fashion Ltd’, a company to maintain communal harmony and a Censor Board should be set up even for advertisements, stated Mr Shinde that such demand would also be made with the Union Government.

‘Vedant Fashions Ltd.’, a company has made the advertisement for ‘Manyavar’, a brand of readymade clothes through which ‘Kanyadaan’, a religious ritual of Hindus performed in the marriage ceremony has been misrepresented and it is advised to call it as ‘Kanyamaan’ instead. It is the most objectionable advertisement and hurts the religious sentiments of Hindus. This advertisement deliberately creates misunderstanding about a religious ritual that is quite extensive and nurtures high values. Pro-Hindu organisations staged demonstrations to protest against this advertisement. ‘Vedant Fashions Ltd.’ should render an unconditional apology to Hindus and immediately withdraw such an advertisement, was the demand made by Dr. Uday Dhuri, the Spokesperson of Hindu Janajagruti Samiti (HJS). Various pro-Hindu organisations joined these demonstrations staged at Vashi, New Mumbai outside the showroom of ‘Manyavar’.

Along with representatives of hindu organisations devout hindus created awareness amongst people through the boards displayed by them. Pro-Hindu organisations also appealed to people to boycott the ‘Manyavar’ brand till they don’t render an apology and withdraw the advertisement.

In the advertisement released by ‘Manyavar’, Hindus have been targeted. The ritual of ‘Kanyadaan’ is shown as a regressive custom since ‘Kanya’ is not something that can be donated. It is also appealed through the advertisement to change the name of this ritual from ‘Kanyadaan’ to ‘Kanyamaan’. In none of the religions, women are respected as in Hindu Dharma. Women are worshipped as a form of ‘Adishakti’ whereas other religions don’t give such respect to women. ‘Vedant Fashions Ltd’ should also make advertisements on the wrong customs and traditions followed in other religions and show guts. If this advertisement is not withdrawn by ‘Manyavar’, the agitations will be intensified in future, warned Dr. Uday Dhuri on the occasion.

Kanyadan vs ‘Kanya Maan’: Here is all you need to know about the Hindu wedding ritual and what the Manyavar ad gets wrong