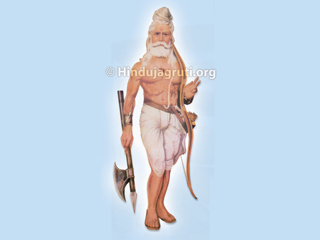 Meaning: Parshuram who is well-versed with the four Vedas and sports the bow and arrow upon His back (that is the one who has the radiance of both the Brahman and the Kshatriya) will destroy evildoers either with a curse or with an arrow.

When fighting, mere use of weapons is insufficient for a seeker. He should have the potential to curse in conjunction with the former. Shri Parshuram single-handedly eliminated the warriors from the earth, circumambulating it twenty-one times. What exactly does this mean? He destroyed the evil Kshatriyas. If He were to destroy all the Kshatriyas on the earth thoroughly even once then not a single Kshatriya would have survived for the second round! However He slew only the evil Kshatriyas. Let us all attempt to destroy the evildoers at least once.

Bhagwan Parshuram, the sixth Incarnation of Vishnu, belongs to the Tretayug, and is the son of Jamadagni and Renuka. Parshu means axe, hence His name literally means Ram-with-the-axe. He received an axe after undertaking a terrible penance to please Lord Shiva, from whom He learned the methods of warfare and other skills. Even though He was born as a Brahmin, He had Kshatriya (warrior) traits in terms of aggression, warfare and valour. Hence He is said to be a ‘Brahma-Kshatriya’ and one who possesses Brahmatej and Kshatratej.

He killed the entire army and King Kartavirya Sahasrarjuna, who took away the magical cow (Kamadhenu) forcibly, that belonged to His father Jamadagni. In revenge the King’s sons killed Jamadagni in Parshuram’s absence. Furious at their unrighteous act, He killed all sons of the King and also went on killing all corrupt Haihaya Kings and warriors on the earth 21 times.

He then conducted the Ashvamedha sacrifice, done only by sovereign Kings and gave the entire land He owned to priests who performed the sacrifice (Yadnya).

He is a Chiranjeevi (Immortal) who fought the advancing ocean back, thus saving the lands of Konkan and Malabar (Maharashtra – Karnataka – Kerala coastline). The coastal area of Kerala state along with the Konkan region, i.e., coastal Maharashtra and Karnataka, is known as ParshuramKshetra (area).

He has been a Guru to Bhishma, Dronacharya and later also to Karna. He taught Karna the extremely powerful Brahmastra (a celestial weapon). But He also cursed that the knowledge would be useless to Karna, predicting much in advance that Karna will join the unrighteous Duryodhana in the Kurukshetra war. Such was His love for Righteousness.

Also, the Sudarshan chakra (or Sudarshan Vidya) is said to be given by Parshuram to Lord Krushna. The purpose of the sixth Incarnation of Vishnu is considered by religious scholars to be to relieve the earth’s burden by exterminating the sinful, destructive and irreligious kings that pillaged its resources, and neglected their duties.

Parshuram is a martial Shraman ascetic. However, unlike all other Incarnations, Parshuram lives on earth even today. The Kalki Purana states Parshuram will be the martial guru of Sri Kalki, the 10th and final Incarnation of Lord Vishnu. It is He who instructs Kalki to perform a long penance unto Shiva to receive celestial weaponry.

He created a temple of worship right after He resurfaced Kerala from the sea. He placed statues of various Deities in 108 different places and introduced martial arts to protect the temple from the evil.

We pay our obeisance to this Incarnation of Lord Vishnu who reinstated Dharma in Tretayug and Dwaparyug.