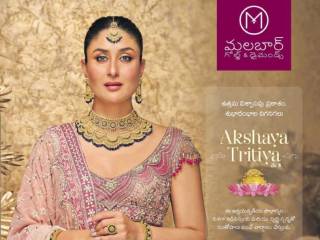 Success to Hindu Janajagruti Samiti and organized protest by Hindus!

Recently, an advertisement was released by the famous Malabar Gold & Diamonds jewellery firm on the occasion of Akshaya Tritiya. It featured actress Kareena Kapoor-Khan without a bindi, while asking people to buy jewellery from them on the occasion of Akshay Tritiya. Hindus protested the insult of Hindu symbols while using a Hindu festival to sell their jewellery. On April 22, 2022 it became a trending topic on Twitter as well with #NoBindi_NoBusiness and #Boycott_MalabarGold occupying top spots in the national trends.

We hope that other brands will also respect Hindu culture & sentiments in their advertisements. https://t.co/pXZHOsUIyz pic.twitter.com/8315d6sEnk

The Hindu Janajagruti Samiti had also called for a massive protest in this matter. As a result, Malabar Gold has removed Kareena Kapoor Khan from this advt. put up on its site and the Hindu actress Tamannaah Bhatia has been roped in there.

Malabar Gold & Diamonds, owned by M P Ahammed is promoting their jewellery for the auspicious day of Akshay Tritiya. The advertisement features Kareena Kapoor Khan as a model with no bindi on her forehead.

Every Hindu woman puts kumkum or bindi on her forehead as the foremost adornment be it a festival or even in everyday life. But the said advertisement features Kareena Kapoor Khan without a bindi. This is an insult to the Hindu religion. Malabar Gold & Diamonds is disregarding Hindu religious traditions while expecting Hindus to spend their money with them.

Several social media users have objected to this appropriation of a sacred Hindu festival and contempt of Hindu sentiments sentiments.

Malabar Gold & Diamonds @Malabartweets is promoting their jewellery @mataonline for the auspicious day of #AkshayaTritiya by having Kareena Kapoor Khan as a model with no bindi on her forehead.

Why no bindi for Hindu festivals?

No Bindi ,Mang ,Tilak ,No Business #AkshayaTritiya is Hindu Festival ,Buy you Gold Jewelarry from the Shop's promote Hinduism ,If you want real blessings of Maa Lakshmi ,#NoBindiNoBusiness pic.twitter.com/MwBFEvLT5r

The Indian brands and advertising agencies have never been reluctant in using Hindu festivals for their vague social preaching and awareness campaigns.

Last year, Diwali campaign and collection ‘Jashn-e-Riwaaz’ launched by popular ethnic garment brand Fabindia was not been received well by people on the internet.

Ceat tyres featuring brand ambassador Amir Khan released an ad campaign preaching ‘how roads are to be used to drive vehicles and not burst crackers.’

Clubbing the cricket as well as the Diwali season, Khan ‘educates’ the society kids about bursting crackers only in the compound of the housing society and not on the road if their cricket team happens to win.