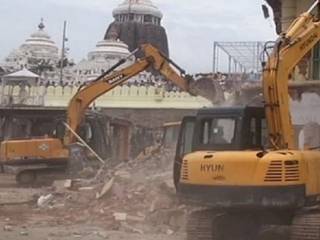 The Odisha cabinet on 16th August 2019 approved a proposal to clear structures within 75-metre radius of Jagannath Temple, Puri to facilitate free movement of pilgrims, visitors and ensure safety of the 12th century shrine. The decision was taken based on the recommendations of Justice BP Das Commission, constituted by the state government in July 2016 to suggest reforms in functioning of the Jagannath temple, Puri. Chief minister Naveen Patnaik, has approved a Rs 265 crore mega plan to turn Puri into a world heritage city and to prevent terrorism. He approved the demolition drive and had urged people to cooperate so that security of the Jagannath temple could be ensured.

From 27th August 2019, the Puri district administration has been on a demolition spree of old structures within 75 meters radius of the Jagannath Temple ostensibly in the name of development.

The district administration faced a setback in its bid to demolish the 14th-Century Bada Akhada Mutt on 3rd September due to protests staged by saints and disciples. The administration was forced to postpone the demolition move as hundred of Sadhus and saints of all mutts and monasteries in the city didn’t allow the bulldozers to touch buildings. Many saints and disciples of other States also joined the protest.

Importance of The Mutts of Puri

The Mutts of Puri have traditionally served as a primary locus for the generation and preservation of Jagannath culture, both material and intellectual. They were not only centers of scholasticism; they were also centers for the study of painting, sculpture, music, dance, chant and ritual. They were the repositories of the treasures of Hindu art and had libraries of palm leaf manuscripts and books. As centres of learning, there was an unbroken lineage of Gurushiksya parampara that could be traced back to the twelfth century India. If cultures are a tradition, something that is passed on, the role of the Mutts was very important.

The Ramanandi Naga Sadhus gave their lives to  protect Srimandira from the barbaric hands of Kalapahad during the middle ages.

The Emar Math belonging to the Ramanujacharya sect is one of the oldest Hindu monasteries of Puri and provided food during the time of Odisha famine in 1866. The 900 year old Emmar Matha was established by Sri Ramanujacharya himself.

Raghunandan Library, established by the Mahant of Emar Matha in 1921, to promote Odia literature has been totally demolished. Many Odia people who complained about “outsiders” occupying their land however didn’t seem to mind the demolition of a structure that was home to old  Odia manuscripts. Ironically the State Government has sanctioned Rs 5 crore for a modern library to be set up in the land of the 900-year-old monastery. The library will be equipped with all modern facilities for readers and its name will be retained as the Raghunandan Library.

While conducting the demolition drive, Official stumbled upon an underground chamber under the Emar Mutt monastery that was about 12-15 feet deep and 50 feet wide. Immediately a Snake Helpline NGO was called to see if there were any snakes inside. Mathadhipath of Emar Mutt, Mahanta Rajgopal Ramanuj Das, said the chambers served as granaries during times of distress and store food for distribution during the 1866 Odisha famine.

1. 2 petitions were filed in the Supreme Court to stay the demolition. One was from a Chennai resident, and another by the Intercontinental Lawyers’ Association. Both were dismissed by the Supreme Court.

2. A silent protest was held by the Mahant Rajgopal Ramanuj Das.

3. Hundred of Sadhus and saints of all mutts and monasteries in the city didn’t allow the bulldozers to touch buildings.

3. Shankaracharya of Puri, Swami Nischalananda Saraswati alleged a conspiracy behind demolition of mutts and other religious institutions in Puri. He stated that the BP Das Commission had not taken any suggestions and feedback from the stakeholders in this connection. He also criticized the Supreme Court-appointed Amicus Curiae Ranjit Kumar for not taking any advice or suggestions from him before taking any decision or submitting the report to the apex court in this connection. The Shankaracharya insisted that all this was an attempted to secularize what are clearly Dharmic spaces, and this facilitate the take-over and control by the State.

“Whatever report submitted by Amicus Curiae and Das Commission to government and the Supreme Court, respectively is completely invalid. As BP Das Commission submitted its report without consulting the head of the religious institution, the report is a conspiracy to declare Puri Srimandir as a secular entity instead of a religious one,”

Shankaracharya further points out that this is part of a larger project to secularize, desacralize, trivialize and commercialize all aspects of Hindu Dharma. We have already seen this in action in cases like Sabarimala, Jallikattu, Made Snana, Diwali and Dahi Handi rulings where judiciary and executive together have started taking unilateral decisions on Hindu/ Dharmic practices. So in the context of Rath Yatra timings, the Shankaracharya adds:

“As per the Skanda Purana, chariots of the deities should reach Gundicha temple on the same day during Rath Yatra. But now it is being said that chariots should not be pulled after sunset. I want to question whether Samiti, CM or Law Minister are the right persons to decide on such religious traditions”

4. Puri MLA Jayant Sarangi has opposed the demolition drive. He said that eviction of houses and temples near the Jagannath Temple was without basis and a conspiracy, and no blueprint has been made public by the administration. He added that while he supported development of Puri, he was opposed to how the administration worked on the demolition drive without taking people into confidence and disregarding standard operating procedures. He also doubted the official reason of these mutts being unsafe as a reason for demolition.

5. The Odisha chapter of Indian National Trust for Art and Cultural Heritage (Intach) expressed its reservation on the demolition and suggested that many of the old structures could easily have been restored with proper conservation. According to Amiya Bhushan Tripathy on Intach, “These old religious places bear sacred significance and are an integral part of the Jagannath culture. The mutts of Puri, unlike those in the rest of the country, have a symbiotic relationship with the temple and the deities, and have important roles to play in the daily ceremonies and yearly rituals, including the world famous Rath Yatra,”. Memorandum by INTACH was submitted to Odisha CM against demolition of Mutts in Puri

6. Some Hindus protested the demolition of Mutts in Puri via twitter. Sharing few tweets,

For more than a week, the State Government of Odisha has been bulldozing its way through the priceless heritage that surrounds the Jagannath Temple at Puri. All in the name of development. cc:@indiccollective pic.twitter.com/Jet9K3YpRr

The eviction drive at Puri reached the historic Emara Matha today. The matha which stands as a testimony of Ramanujacharya's arrival at Puri and his influence on the traditions of the temple is not only a heritage building but also a sacred place of worship for Vaishnavas pic.twitter.com/4oBPts1WKl

1. The wrong demolition action in case of Mutts, temples treating them as unauthorized, should be immediately stopped.

2. Ancient Mutts demolished so far should be reconstructed by Odisha Government and make good all losses incurred in this connection. Moreover, efforts should be made for preservation of ancient idols and traditions.

3. High-level joint committee should be set up by Union Home Ministry and State Home Department of the Government for protection of Shri Jagannath Mandir and the Government should find a solution, without causing harm to the Mutts and temples.

4. Stringent action should be taken against the officers and employees of Government, who initiated such inappropriate action of treating Mutts and temples in Mandir area as unauthorized. 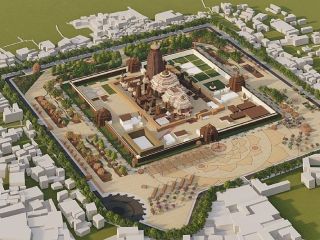 ASI informed the Odisha HC that the construction work of the Puri Heritage Corridor may have caused damage to the 800-year-old Jagganath Temple and the required permissions for the project were not granted. Read more » 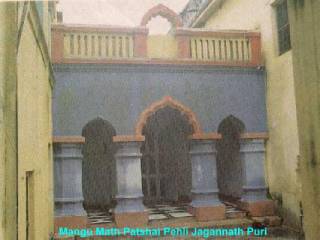 The Mutt, an abiding symbol of the connection between Sikhism and the 12th century Jagannath Temple. Ignoring the unbroken campaign for its conservation, in one heartless order, the Odisha government destroyed 12000 sq ft of the Mutt; now, only a 10×9 sq ft area of the original place remains. Read more » 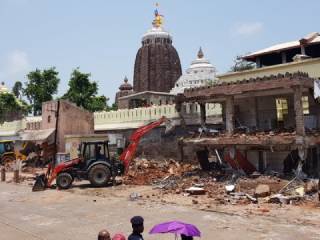 In any other country these temples would have been declared as heritage monuments. But that is not so in India were temples are treated as expendable structures by the Hinduphobic and ultra-secular State Administration. Read more » 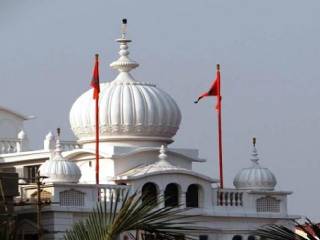 The Memorandum was sent to the Honourable CM of Odisha on behalf of the Sikh Community for the stopping of the demolition of the Mangu Mutt and the Panjabi Mutt at Puri.  Read more » 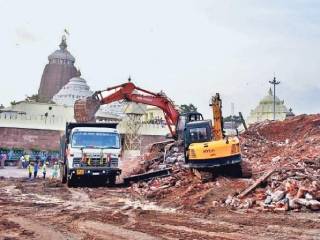 Chiefs of 13 mutts have raised an objection to the demolition of mutts and claimed that the Advocate General’s submission in the Supreme Court that Mahantas have consented for the demolition is false. Read more » 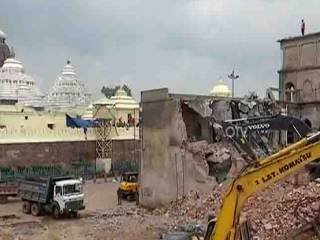 The shocking speed and scale of the destruction of the Emar Mutt was heartbreaking. For nearly eight centuries, it had been a sentinel, guarding the gates of the Lord’s temple. Read more »

Swami Nischalananda Saraswati on Saturday alleged conspiracy behind demolition of mutts and other religious institutions in the pilgrim town. Read more » 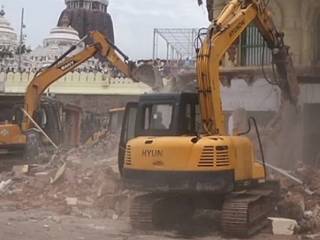 The Indian National Trust for Art and Cultural Heritage (INTACH) has submitted a memorandum to the Chief Minister of Odisha in the matter of the demolitions that are underway in Puri. Read more »