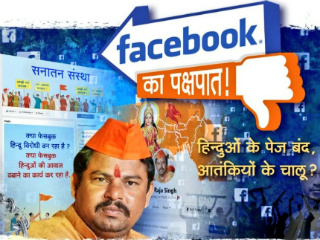 It is apparent that Facebook is deliberately not responding to the mails sent by Hindu Janajagruti Samiti and Sanatan Prabhat. Basically, Facebook was supposed to cite the reasons while suspending the pages; however, it failed to do so even after being a world class company. Such a scenario does not take place anywhere else in the world. This reveals Facebook’s arbitrary and stubborn operating procedure. Central Government must lay down strict restrictions on such social media and keep a close vigil on it.

No wonder if anybody interprets Facebook’s dubious intentions as pro-Christianity and anti-Hindu stance behind these suspensions !

Mumbai – Hindu Janajagruti Samiti, Sanatan Prabhat and Sanatan Sanstha have sought an explanation from Facebook after the latter removed Hindu Janajagruti Samiti’s ‘Hindu Adhiveshan’, Sanatan Prabhat’s ‘Sanatan Prabhat’ and ‘Sanatan Shop’ pages without citing any reason. However, Facebook has still not responded to the mails. Adding to the injustice, Facebook has now suspended HJS’s Hindi page as well. It also suspended page of an American organisation‘Forum for Hindu Awakening’ (FHA), run by a devout Hindu organisation. Several devout Hindus are protesting against Facebook’s anti-Hindu stance in a lawful manner.

Immense harm inflicted on lakhs of patriot and devout Hindus in India and across the world after the suspension of Hindu Adhiveshan, HJS Hindi page, FHA, Sanatan Prabhat, and Sanatan Sanstha

1. ‘Hindu Adhiveshan’ was a verified page with 14,45,000 followers. Apart from this, HJS State and District level pages are working as well. Majority of these pages, i.e. 35 State and District level pages are taken down by Facebook. All the pages regularly post about the current affairs of the Nation and Dharma, as well as educational posts related to Dharma. HJS told that all the posts and publications were carried within a legal framework. These pages served as a guide to all the patriot and devout Hindus. And hence, suspension of these pages has ideologically inflicted an immeasurable loss to the Hindus.

2. HJS Hindi page had more than 2,50,000 followers. These pages too posted about the Nation and the Dharma and created awareness among the Hindus.

3. Forum for Hindu Awakening (FHA), run by a devout Hindu organisation in the US, had more than 6 lakh followers. It used to create awareness among Hindus about the Dharma and spiritual seeking. It also served as a guide for those who intended to contribute to the Dharma. It specifically served the Hindus living in the US and other countries.

4. Sanatan Prabhat newspaper, which had more than 7,500 followers on its Facebook page also served as a guide for Hindus and taught spiritual seeking. The page regularly posts about the assaults on Nation and Dharma, educational posts related to Dharma, and thoughts by Saints. After its suspension, Hindus are deprived of the knowledge about the Nation and Dharma. Facebook is responsible for this. (Facebook has strangled journalism and freedom of expression with its arbitrary operating procedure – Editor)

HJS official page was taken down in 2012 too, without citing any reason. Last year too, Facebook had taken down Sanatan Sanstha’s page and BJP’s devout Hindu MLA T Raja Singh’s official page without citing a reason. Moreover, nobody can share any of the Sanatan Sanstha’s website links on Facebook. Earlier, Facebook had also removed the ‘Sudarshan News’ page run by a devout Hindu Editor Suresh Chavhanke and ‘Op India’ page, a nationalist and devout Hindu news portal.

What should Hindus infer from this ? Is it that Facebook is sympathiser of those proliferating hatred and violence in society ? Facebook must publicly explain its stand behind allowing these pages to operate and suspending pages belonging to the HJS, Sanatan Sanstha and others. Failing which, Central Government should compel Facebook to come out in open regarding its unjust treatment to Hindus.

Moreover, Facebook had banned a page in July 2020 created in memory of the reporter Gauri Lankesh, who allegedly had Naxal links and was a staunch anti-Hindu figure. After facing protest from communists and so-called secularists, Facebook immediately lifted ban on the page and even apologised.