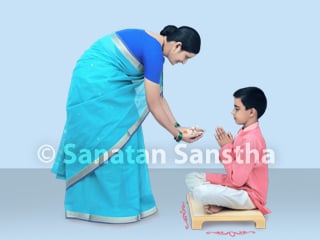 Video: How to celebrate your birthday as per Hindu culture

Birthday as per Hindu Calendar

‘Celebrating a birthday is actually expressing gratitude to God for the opportunity to do sadhana (spiritual practice) during the past year and praying for His grace in the coming year.’- Pujya (Mrs.) Anjali Gadgil , 21st January 2005, 4 p.m.

Birthday is the day to enhance one’s ability to imbibe chaitanya: ‘Birthday is the day for enhancement of the ability of an embodied soul to imbibe chaitanya, through the benevolent frequencies gained by invoking Deities. Through this action which raises the sattva component in the atmosphere, the embodied soul achieves stability of the inner mind.’ –  Pujya (Mrs.) Anjali Gadgil, 28th August 2005, 11.40 a.m.

2. History and importance of celebrating birthday as per Hindu Calendar

2.1 Birthday of an embodied soul in the ‘Satyayug’

2.2 Birthday of an individual in the Treta and Dvaparyugs

In the ‘Treta’ and ‘Dvaparyugs’ either the individual would visit saints or vice-versa and the saint would bestow His blessings for rapid spiritual progress. After having received blessings the embodied soul would seriously enhance his efforts to increase spiritual progress. On the subsequent birthday when the individual would go for blessings to the saint He would bless him only after assessing if his spiritual progress had occurred in the past year. Since the seeker was fully aware that his progress was a consequence of the saint’s blessing there were less chances of inflation of his ego.’ – Ms. Madhura Bhosale, 8th May 2005

3. Importance of celebrating the birthday as per Hindu calendar ( Lunar Calendar )

However astrology says ‘No auspicious action should be performed on the date that one is born because that day is inauspicious. So what stand should be adopted?

A Scholar: The implied meaning of the word ‘inauspicious’ in this context is different. The attributes of the embodied soul born on that particular day match with the frequencies present on that date as per the Hindu lunar calendar (‘tithi’). The sorcerers with their prowess to do black magic, can make a replica of an embodied soul and can cause distress upto 70%. Thus this day is considered ‘inauspicious’ due to the probability of suffering which could be maximum  on that date.

In ‘Kaliyug’ this is an excellent example of the misconceptions harboured by people. On this day the probability of harm is more means that, chances of obstacles in any auspicious task is high so the misconception that was formed was that one cannot perform any holy ritual for the embodied soul on this date of the Hindu lunar calendar.  On the contrary, when celebrating the birthday on this date, through the ritual of ‘aukshan’ and a prayer made unto the family deity, the chaitanya generated helps the embodied soul to combat the distressing energy attacks at various levels. Thus, there is no rule that one must not perform any ritual on this day and the statement from astrology is baseless.’- Pujya (Mrs.) Anjali Gadgil, 4th March 2006, 7.17 p.m.

Blessings and good wishes endow maximum benefit: ‘The frequencies of the date of birth according to the Hindu lunar calendar match the individual maximally.Since the blessings and good wishes of relatives and well-wishers bring maximum benefit to the individual celebrating the birthday as per the Hindu lunar calendar is more beneficial.

One develops the strength to combat obstacles in life: Since the frequencies in the universe on the birthday as per the Hindu lunar calendar match the temperament of the person born on that date, the ‘sattvik’ and chaitanya-enriched rituals done by an individual on that day leave a deep impression on his subconscious mind. As a result, he derives spiritual prowess to combat problems in his future life.’- Pujya (Mrs.) Anjali Gadgil, 21st January 2005, 9.11p.m. and 28th August 2005, 11.40a.m.

4. Method of celebrating birthday as per Hindu calendar

‘There are as many temperaments as there are people and so also the corresponding number of paths of spiritual practice.’ This is one of the basic tenets in Hinduism. Based on this, the methods of performing religious rituals also vary. Though the methods vary, the benefit of the ritual is the same, which is all methods endow the Divine principle. Thus one can decide the method as per convenience. Following are the two methods for celebration of a birthday as per Hindu calendar and Hindu culture.

Video: How to celebrate your birthday as per Hindu calendar and Hindu culture

A. ‘In the first year of life every month and thereafter every year on the date of birth as per the Hindu lunar calendar one should bathe after an oil massage. This should be, followed by application of tilak of kumkum (vermilion)on the forehead.

B. With the resolve ‘आयुरभिवृद्ध्‌यर्थं वर्ष (मास) वृद्धिकर्मं करिष्‍ये’ fistful of rice are placed on a wooden seat or platform in seventeen small heaps in the name of the family deity (‘kuladevata’), lunar asterism at birth (‘nakshatra’), parents, Deities Prajapati, Surya, Ganesh, Parshuraam, Raam, Hanumaan , Shasthidevata, Sages Maarkandeya, Vyaas, Krupaachaarya, Ashwathaamaa, Bali, Pralhaad and Bibhishan . The corresponding deity is invoked in each heap and their ritualistic worship with sixteen substances is performed. The Shasthidevata is offered a sacrament (‘naivedya’) of curd and rice which is later fed to a cow or any other animal. The other Deities are offered sugar cubes (‘khadisakhar’) or ‘pedhas’ (a sweetmeat) which is then distributed as holy sacrament.

C. With a prayer, a drink made from a cube of jaggery, a fistful of sesame seeds and half a cup of milk is partaken of by the one celebrating the birthday as per Hindu calendar.

D. Relatives and friends are invited for a meal. Offering of food and other items should be done on this day as much as possible.

E. Avoid receiving money or gifts on this day.

The method of celebration of birthday as per Hindu calendar is given below.

A. Bath after an oil massage: On the birthday, after an oil massage, have a bath with clothes on (bath taken in this way is symbolic of forgetting the past, with a prayer to The God for constantly remaining in the present.) When bathing the spiritual emotion should be that ‘The pure and holy water of river Ganga is purifying my body and mind’.

B. Wear new clothes after the bath.

C. Offer obeisance (‘namaskar’) to parents and elders in the family.

D. Perform the ritual of ‘abhishek’ (ablution with liquids like milk and water) or ritualistic worship of the family deity wholeheartedly.

E. Ritual of ‘aukshan’: The ritual of ‘aukshan’ is performed on the one whose birthday is being celebrated. Both, the one performing it and the one on whom the ritual is being performed, should harbour the spiritual emotion that, ‘Through our medium, God Himself is performing this ritual and bestowing His blessings on us.’ At the end of this ritual unbroken rice grains (‘akshataa’) are sprinkled on the head of the one on whom ‘aukshan’ is performed after venerating one’s family deity or deity of worship.

F. A gift is presented to the one celebrating the birthday with the following perspective. As one’s duty a child is given a gift to express appreciation. While gifting an adult,one should not have a sense of doership. When one gifts something without expectation, after a while one forgets about it. The gift given on a birthday should be such. If doership or expectations are harboured in the mind when gifting then a give and take account is created between the two. When the one receiving the gift has the attitude that it is the holy sacrament (prasad) that he is receiving with God’s grace, then a give and take account is not created.

G. Clothes worn when bathing should be given away, without any expectations. This offering should be made to one who is deserving hence it is advisable to give it to a devotee of God or to one serving in the mission of betterment of the nation and righteousness, instead of a beggar.