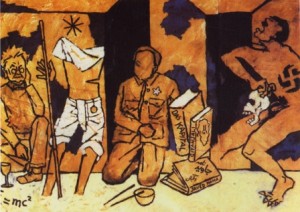 Out of the four leaders, M. Gandhi is decapitated and Hitler is naked. Hussain hates Hitler and has said in an interview 8 years ago that he depicted Hitler naked so as to humiliate him as he deserves it ! How come Hitler’s nudity caused humiliation when in Hussain’s own statement nudity in art depicts purity and is in fact an honour ! This shows Hussain’s hypocrisy and perversion.

Conclusion M.F. Hussain depicts the Deity or person he hates as being naked. He shows the Prophet’s mother, his own mother, his daughter, all the Muslim personalities fully clothed, but in contrast Hindus and Hindu Deities along with Hitler are shown naked. This proves his hatred for Hindus.

Disclaimer – These obscene paintings have been given space here, only with an intention to highlight the hurt Hussain has caused to Hindus. It is painful otherwise to reproduce this work. It is not our intention to further hurt the sentiments of Hindus. See what people think and voice your opinion

Important Verdict: Why does Delhi High Court think Hussain is wrong but could not be punished ?

Appeal to stop the exhibition “Husain at Hundred” at Aicon Gallery, New York

Alert Hindus notified Forum for Hindu Awakening (FHA), about the celebration of M.F. Husain’s 100th birth anniversary named as “Husain at Hundred” at Aicon Gallery, in New York, USA which will be held from September 17th through October 24, 2015. Click here to learn more

M F Hussain has been selected for the Kerala government’s prestigious Raja Ravi Varma Award. Announcing this year’s award, education and culture minister M A Baby said the award comprising Rs.1.25 lakh in cash prize, a citation and a plaque would be presented to Hussain on his birthday on September 17. (Source: Zee News)

Does Hussain deserve an award or punishment?

Many politicians including the then Prime Minister, Vice President and many ministers and other so-called ’eminent’ personalities from various fields have termed death of Anti-Hindu M F Hussain as ‘National loss’, ‘loss to the art and creativity and Loss of a noble soul’. Hindu-hater Hussain took the citizenship of Qatar, leaving India, then how it can be a National loss. He has also drawn nude paintings of Hindu Deities and Bharatmata then how it can be a loss of noble soul ? 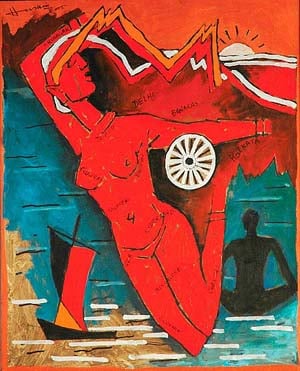 Insult of Mother India by Hussain Hussain displays his naked Bharatmata painting on his website The Painting was displayed at the following link : http://www.apparaoart.com/auctions/index.php?start=20&end=4# ( see image no 23) Hindu Janajagruti Samiti has displayed this image openly on its website so that Hindu brethren become aware of the blasphemy done against their Religion and … Read more

Content: Hussain – A Muslim! So What? Khajuraho and Art of MF Hussain Delhi High court’s verdict that condemns Hussain’s nude paintings Report of Intelligence Bureau Comment on Artistic Freedom by UN Common Hindu’s Outcry Hussain in the eyes of the Muslims Double standards of pseudo-secularists Voice of India! Some British (pseudo) Hindu intellectuals and … Read more