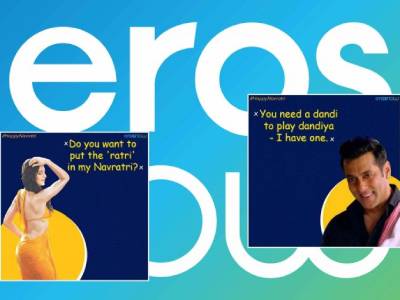 Eros Now, a digital OTT platform owned by Eros International Media Ltd, has apologised for publishing offensive Hinduphobic content on Navratri. The company wrote, “We at Eros love and respect our cultures equally. It is not, and it has never been, our intention to hurt anyone’s emotions. We have deleted the concerned posts and we apologise for having offended anybody’s sentiments.”

On Thursday morning, the hashtag #BoycottErosNow started to trend on Twitter. The reason was the posts published by Eros Now on its social media platforms. Several Netizens posted screenshots of the now-deleted posts on Twitter and Facebook. The posts shared by Eros Now had vulgar texts with photos of Katrina Kaif (Do you want to put the ratri in my Navratri), Ranveer Singh (Be naughty, sweet to mithai bhi hoti hai) and Salman Khan (You need a dandi to play dandiya – I have one) among several others. 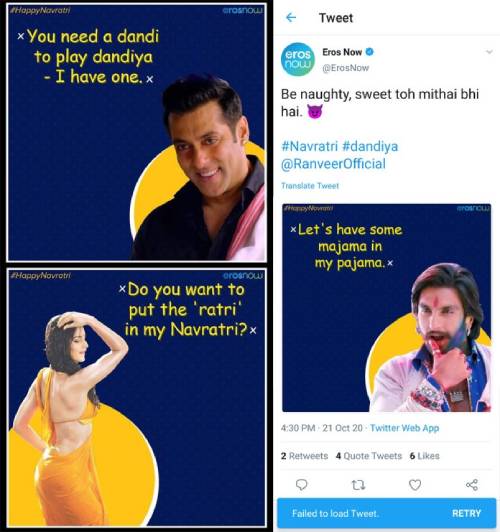 Interestingly, Eros Now then went ahead and ‘hid’ replies which were still critical of their Navratri posts. 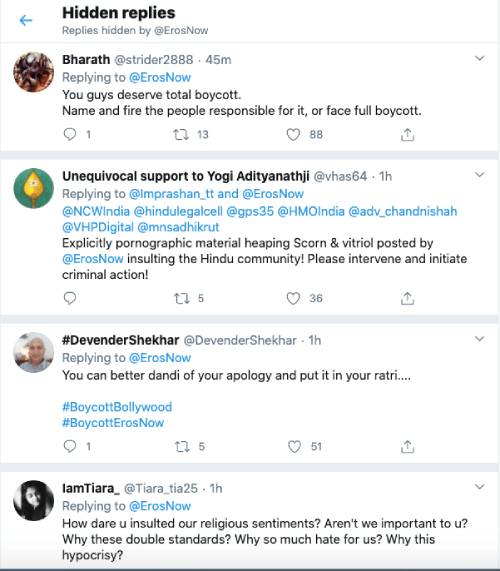 The continuous attack on Hindu festivals

Hindu festivals have always been under attack by the woke and so-called liberal sections of society. Earlier, lawyer Deepika Singh Rajawat, who represented Kathua rape victim’s family but failed to attend over 100 hearings, shared a controversial caricature. She was criticized heavily for posting Hinduphobic content during the festival. During Rakshabandhan this year, PETA put up hoardings across the country, urging people to avoid leather products that have nothing to do with Rakshabandhan whatsoever.

The Delhi Government has ordered the schools to ‘sensetize’ students against bursting crackers during Diwali via WhatsApp and other methods as they won’t be attending school due to Covid-19 restrictions. Interestingly, the air quality of Delhi is on the decline due to stubble burning, which is often ignored by the section that blames Diwali for the pollution every year.

The mocking of Hindu festivals is not limited to India. The niece of Senator Kamala Harris posted a caricature in which Kamala was depicted as goddess Durga and President Donald Trump as Mahishasur. After backlash, she quietly deleted the post.