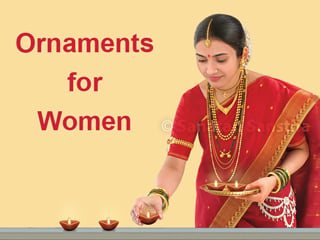 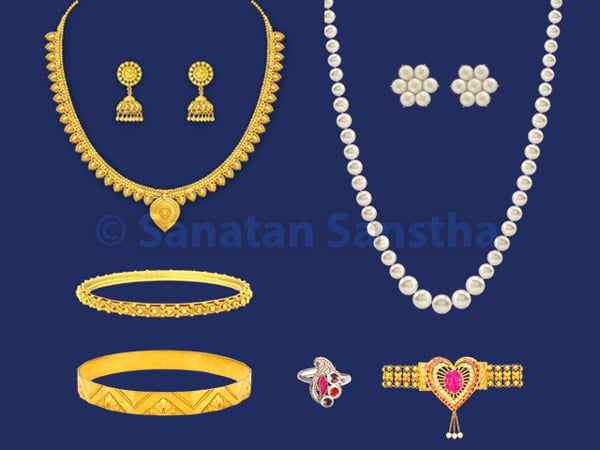 Women’s jewelry is an invaluable cultural inheritance, which maintain her beauty and protect her chastity. For a woman, they are not merely objects for display or for deriving pleasure, but are an important medium to provide her with Chaitanya (Divine Consciousness) and activate divinity in her. Wearing ornaments has a lot of spiritual significance. In a woman, it reminds her to remain chaste and prevent infidelity, reduces the black (negative) energy in the body, protects her from negative energy attacks; also, the parts of the body where ornaments are worn are subjected to spiritual healing similar to acupressure.

1. Importance of wearing of ornaments by women and the associated benefits

A. The Raja Principle in a woman, that is, her womanhood gets activated due to the Tej (Radiance) in ornaments

Ornaments are Raja-predominant and bestow Tej. This Tej gives appropriate direction to the Raja-dominant actions in the body of a woman. Through the woman, direction is provided to the speedy process of connecting the constantly moving ‘Space’ and ‘Time’ in the Universe. The Tej in ornaments activates womanhood, that is, the Raja component in a woman. This in turn activates the chetana Shakti (Sentient energy) in her body. This activated state, with the help of the waves of Shakti (Divine Energy) emitted for an action, brings about a momentum in the atmosphere; hence, when a woman adorned with ornaments enters an environment, enthusiasm spreads in it.

B. The radiance from the Tej-tattva (Absolute Fire Principle) in ornaments bestows a woman with chastity, which in turn leads her to divinity

The Tej-tattva in ornaments provides appropriate direction to the Raja component in a woman and compels it to perform actions proportionate to the Tej in her. Then, there is very little possibility of a woman (adorned with ornaments) behaving recklessly. Reckless behaviour can make a woman adulterous. However, the Tej-tattva in ornaments being radiantly Divine, it provides the woman with modesty and leads her towards divinity.

C. Ornaments of wifehood are a medium of reminding women of fidelity unto their husbands

If an individual supports wearing of ornaments with bhav (Spiritual emotion), it can progress from asat (non-Truth) to the sat (Absolute Truth). Hence, every woman has to use ornaments for making individual spiritual progress by following the culture.

2. What kind of ornaments should be worn by women who are highly emotional ?

Women being emotional, different kinds of ornaments have been created to manifest the Shakti within them.

A. Women who are highly emotional should wear large ornaments

Women who are highly emotional should wear large ornaments. This will activate the Raja component in them, and create an unmanifest kshatrabhav in them, making them capable of overcoming obstacles.

B. Large, broad ornaments with sattvik designs on them have an effect on the Manomay-kosh (Mental body sheath) of the individual, thus reducing its highly emotional nature

Large, broad ornaments encompass a larger part of the body. As a result, the negative energy troubling the individual adorning them is kept under a larger check. There is a check on the negative energies from entering the body and exchanging black energy with it. Since the sattvik designs on large ornaments are also large, they are able to absorb Chaitanya in larger proportion. This Chaitanya has an effect on the Manomay-kosh of the individual wearing these ornaments and helps in reducing its highly emotional nature.

3. Why should widows not wear ornaments ?

A. When the notion of wifehood ceases, that of detachment ascends !

When the notion of wifehood ceases, in the real sense, the seed of creation enriched with radiance in the woman undergoes dissolution and is replaced by an emotion of detachment. Dissolution of the radiance of ornaments means commencing a life of detachment, without the ornaments.

B. For rapid creation of Vairagyabhav in a woman, the concept of giving up ornaments in the Kaliyug (Era of strife) has been made necessary