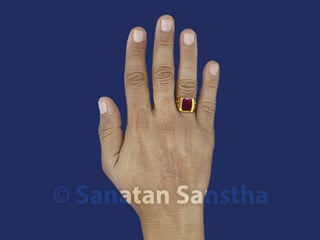 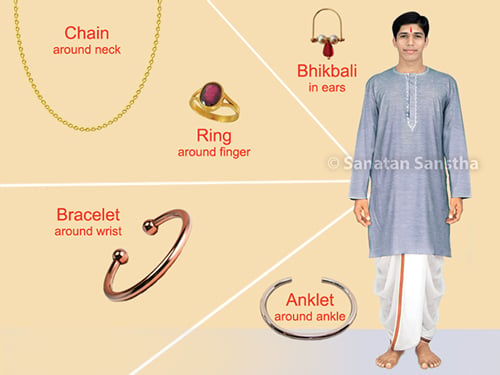 1. Why do men generally not wear ornaments?

In the earlier times, there was a tradition of men wearing ornaments; however, in the present Era, most men generally abstain from wearing ornaments. The Shiv Principle has adorned this vast illusory world, and men represent that Principle. Shiv Principle in the form of emotion of detachment works with the support of Maya (The Great Illusion), but does not assimilate it. Since the ornaments are a symbol of attraction, they generally abstain from wearing men’s jewelry.

In the earlier times, the Sages-Ascetics and kings used to wear kunal on their ears. Wearing kunal exerted pressure on the points in the ear lobes and assisted in assimilation of attitude of detachment.

The bhikbali, worn on the ears, augments forbearance, meaning, maintaining restraint at the activity level.

In the earlier times, the Sages-Ascetics used to wear strings of rudraksha beads around their upper arms and wrists, which were called bandhanmalas. These malas would put appropriate pressure on the pressure points of the hands and transfer into the body the energy imparting physical strength and inspiration for activity, and would curb impatience in the activity.

Chain made of gold and silver is worn around the neck. Sometimes the chain is adorned with coral and rudraksha beads.

The ring is an ornament to be worn on the fingers. It appears that the tradition of wearing a ring either on one or more fingers has been prevalent since ages. The Chaitanya in the ring brings about a certain pressure on the soft portion of the fi ngers, thus leading to spiritual healing through accupressure. It eliminates the localised obstacles in the form of black energy and each finger receives Chaitanya. Since self-activity orientedness is a symbol of the Male Principle, men wear a ring on the ring finger of the right hand that represents the Surya-nadi.

Like gold and silver, copper too is a metal that emits sattvik waves. Copper is a metal that absorbs heat from the body. Hence, Marak-shakti is created in it. Bracelet is made of copper. Being sattvik, it has Tarak-shakti and to some extent, Chaitanya. The individual who wears it remains physically healthy.’ Wearing a copper bracelet is an energy enhancing act for the individual, which maintains the balance of his body’s energy.