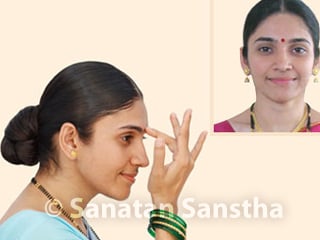 1. Vermilion: An adornment of women

Subtle experiment of a woman wearing a synthetic mark (Bindi) and a woman wearing vermilion (Kumkum)) : Look at the two pictures below with concentration and note whether you feel good, bad or nothing at all after looking at the pictures.

1.1 The effect of applying a bindi on the forehead

The woman in picture ‘A’ above, has applied a bindi which can be stuck on the forehead in place of kumkum. The glue applied for sticking the bindi, the back of the bindis is made of artificial objects like paper, plastic etc. which are tama-dominant. The subtle effect of a bindi is as follows:

It is evident from this why one experiences distress by looking at the woman in picture ‘A’ who has applied a bindi on her forehead. Due to a lack of knowledge of Spiritual science some women overlook the auspicious things mentioned in Hindu Dharma.

1.2 The effect of applying vermilion (kumkum) on the forehead

In picture ‘B’, the woman has applied kumkum on the forehead. The subtle fragrance emitted by kumkum has the ability to attract and emit the Pavitraka of Deities, that is, their subtlest particles in the Universe. Due to the saviour-destroyer Chaitanya-frequencies emitted by kumkum the woman wearing it is protected from negative energies. This explains why one gets good spiritual experiences by looking at the woman wearing kumkum.

Kumkum not wiped off even when in the sun or rain: I was regularly using a bindi. On reading a message to seekers in the weekly ‘Sanatan Prabhat’ about ‘apply kumkum in place of a bindi’, I started applying kumkum from that very day onwards. Since then, till date, the kumkum I have applied for the day has never been wiped off even in the sun or upon getting wet in the rain. – Mrs. Manisha

B. After applying kumkum, the ability to attract the Shakti Principle is generated in the woman:

1.5 Effect of fragrance, colour and Shakti of kumkum

Through spiritual experience one can understand that through kumkum, a woman gains Tej in the form of white rays due to which the black covering formed on her face reduces.

Spiritual experience: Awareness of circular sensation on the Adnya-chakra and feeling calm after beginning to apply kumkum: In the year 2004 after reading in the daily ‘Sanatan Prabhat’ about applying kumkum, I began to apply it on the forehead. Thereafter I experienced circular vibrations on my Adnya-chakra. My mind became very calm and my face became sattvik. By looking at the kumkum on the forehead I experience calm and cool frequencies in my eyes. – Mrs. Savitri

Normally women apply kumkum after the morning ablutions, after bath and after washing the face. For applying kumkum, the ring finger should be used. If wax is applied before the kumkum, it remains there for a longer time.

1.7 Spiritual reasons for using the ring finger to apply kumkum on oneself

As a result, the raja-guna function of the woman gains strength in the form of Shakti.

1.8 Effects of applying kumkum on the forehead of a woman

1.9 Application of kumkum to others

Subtle effects of application of kumkum by one woman to another:

1.10 Effects of kumkum on women suffering from distress by negative energies

1.11 Effects of applying kumkum or sindur in the hair parting by married women

A. It being possible to keep the flame of warrior radiance constantly awakened in husband: In earlier times by looking at the kumkum or sindur in the parting of married women, the warrior attitude and enthusiasm of men used to increase. For this reason, it is appropriate from the viewpoint of both psychology and Spirituality.

B. Protection from negative energies: The head of women is more soft and sensitive than men. Hence, in order to protect this part of the body from the negative energies, the sindur is filled in the hair parting.

1.12 Spiritual science underlying the use of kumkum being more appropriate than sindur

Due to the destroyer Principle in kumkum, the subtle body of the woman is protected from negative energies. The proportion of destroyer Principle is less in sindur than in the kumkum. This is the reason why the use of kumkum is more appropriate and beneficial than the sindur.

1.13 Reason for application of kumkum by widows being unauthorised by Scriptures

A. Obstacle in the onward journey of the dead husband’s subtle body: After the death of husband, while applying kumkum the woman remembers her husband because of which the subtle body of the husband is again compelled to come to the Earth.

Due to lack of religious education and the increasing influence of Western culture, some widows say, ‘So what if the husband is dead?’ and indulge in irreligious conducts by doing inappropriate actions like applying kumkum on the forehead and wearing a mangalasutra. By doing so, they also cause spiritual harm to the husband. In order to prevent the harm, they should pay attention to observing righteous conducts in daily life seriously.