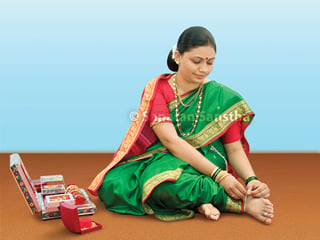 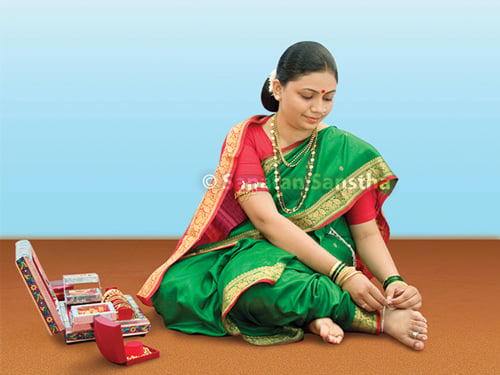 Only in Hindu culture there is a tradition of wearing ornaments all over the body, such as the head, hair, ears, nose, neck, arms, hands, fingers, waist and feet. Apart from these ornaments, women in Hindu Dharma are advised to wear specific ornaments on specific occasions, for example, at the time of the wedding ceremony and festivals ornaments like armlet and waistband are worn. These ornaments are not merely objects for display or deriving pleasure, but are an important medium to provide the woman with Chaitanya (Divine Consciousness) and activate divinity in her.

After reading this article, one can understand the importance of jewelry and reason for the tradition of wearing ornaments all over body in Hindu culture. It only shows the greatness of Hindu culture, which thinks about the spiritual welfare of humanity at every step.

2. In Hindu Dharma, ‘adorning with ornaments’ is a principal achar (conduct)

The Tej-tattva (Absolute Fire Principle) in ornaments provides appropriate direction to the Raja component in a woman and compels it to perform actions proportionate to the Tej in her. Then, there is very little possibility of a woman (adorned with ornaments) behaving recklessly.

Contact with the ornaments awakens the chetana in the body. Chetana in turn imparts alertness to the body. Due to the alertness, the body becomes sensitive to imbibing the sattvik (Sattva-predominant) Tej waves. Through this sensitivity arises radiance. Through the radiance arises divinity, and due to the divinity, joy is established. This joyous state gives an understanding of the blissful God Principle. In addition, through the understanding of the God Principle, one can attain Moksha (Final Liberation).

The joyous radiance of ornaments apparent on the face and body of the wearer eliminates Raja–Tama predominant particles from the atmosphere. Hence, it is tarak, meaning imparter of divinity, so also marak, meaning, destroyer of negative energies.

5. Ornaments are useful in enhancing beauty

Human beings have a natural interest in their own physical appearance. The ornaments are worn to adorn the body, meaning, to augment one’s beauty.

A. Adorning the Deities with ornaments allows an individual to imbibe the waves emitted by the Deities through the medium of ornaments.

B. Receiving the Chaitanya of Deities through the medium of ornaments

C. Being able to receive waves of Deities by wearing new or silk clothes and various ornaments on the days of festivals, religious rituals and other auspicious days

Deities sometimes visit the earth region in subtle form on the days of festivals or religious rituals and auspicious days. Wearing new clothes and ornaments on these days is symbolic of welcoming the arrival of the Deities. Pleased, the Deities bestow blessings and the individual is able to imbibe the waves of the Deities.

Ornaments with designs of snakes, lotus etc. are worn with the objective of attracting the tarak or marak Principle of the Deity.

8. Unknowingly getting benefit of acupressure treatment while wearing ornaments

Acupressure means applying pressure on specific points associated with specific body-parts and removing black energy obstacles in the flow of energy of Chaitanya in the body. Acupressure treatment helps alleviate the physical, psychological and spiritual distress of an individual.

9. Purification and awakening of the chakras due to wearing ornaments

Ornaments are associated with specific parts of the human body. Every body-part is associated with a specific chakra in the body (for example, Anahat-chakra, Adnya-chakra). By wearing ornaments on specific body-parts, the Chaitanya which gets activated through that particular ornament gets linked to the specific chakra associated with that part of the body. This purifies the chakra and, in turn, helps reduce the distress of the individual affected by negative energy. In case of an individual who is not affected by negative energy, awakening of the chakra may occur and he/she might get a spiritual experience related to the chakra. For instance, if the Anahat-chakra is awakened, then bhav (Spiritual emotion) towards God is awakened.

10. Wearing ornaments to avoid the distress due to planets

Planets have a great impact on the life of human beings. Information on wearing rings with specific stones to avoid distress due to unfavourable planetary motion finds a mention in the science of Astrology.

In the earlier times, Kshatriya (Warrior class) kings wore ornaments. This helped protect them from any Aghori experiments that the enemy would perform.

A. By wearing an ornament, a protective sheath is formed around the body-part, thereby reducing the distress due to negative energies

B. Ornaments as a protective sheath

C. Extent of attracting and transmitting Chaitanya and getting protection from negative energies after wearing ornaments

Note 1 – Spiritual level of men above 50 percent and that of women above 60 percent.