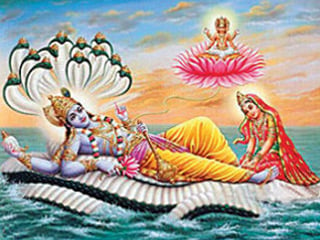 1.1 Qualities of The Supreme God in an absolute incarnation

A. Omniscience: This is because of its spiritual knowledge and not frequencies.

B. Bestower of Serenity or gratification.

1.2 Qualities of God in an absolute incarnation

K. Servitor of devotees: During Yudhishthir’s royal sacrificial fire (yadnya) Shrikrushna cleared up the leftovers after the people had eaten their meals. He was Arjun’s charioteer in the Mahabharat war.

L. The one who works secretly: Krushna secretly helped the Pandavs when Droupadi was being stripped off her sari and on several other occasions.

M. The one who considers His devotees more important than Himself: To prevent the devotee from feeling inferior the incarnation displays that He is inferior. This will give an idea of how great His love for others is. To fulfill Bhishma’s resolve that ‘He would make Krushna use a weapon’ Shrikrushna broke His own resolve that ‘I will not wield a weapon in the Bharatiya war’ for the sake of Bhishma who was a great devotee of His. He became Arjun’s charioteer in the same war, cleared up the leftovers after people had eaten their meals at Dharmaraj’s royal sacrificial fire (yadnya) and performed and is still performing household chores for several saints.

1.3 Characteristics of the physical body

C. The one who has no norms to follow: Norms decide which behaviour is right or wrong. They are applicable to those within the three components; not to those beyond them. Hence issues like marrying 16,008 women is not wrong in the context of Krushna.

D. Aloofness: The following quote of The Lord illustrates that though He does everything, He is untouched by anything.

E. Behaviour like human beings: Incarnations like Rama, Krushna, etc. who assumed human bodies also lived with Their Gurus, served Them and acquired Their grace. Obviously this was an exemplary act done for the sake of others. When Ravan abducted Sita, Rama pretended to be aggrieved and wept uttering ‘O Sita, O Sita’. An incarnation behaves thus to develop a closeness with and to make man for whose spiritual progress He has assumed an incarnation feel He is one of them. The following verse (shloka) in this context is quoted in the Ramayan (6.5.5) as –

Meaning: (Rama tells Lakshman) I do not grieve because My wife has parted from Me or because She has been kidnapped by the enemy but because Her life is being wasted.

The saint tells the disciple, how shall I describe Their state to you? Long ago Vasishtha became the Guru of Shri Ragunath (Lord Rama). – 12:102

The eighth incarnation of Vishnu, Shrikrushna surrendered to Sandipani, His Guru. When an incarnation assumes a human form it has to behave accordingly. – 12:103 – Shri Gurucharitra

1.4 Special features of the ten incarnations of Lord Vishnu

* At the end of the Kaliyug on the third day of the bright fortnight of Shravan the incarnation, Kalki will be born (Kalki Puran).

More information on these incarnations is given in ‘Science of Spirituality: Chapter 12 – Vishnu, point – The ten incarnations (dashavatar)’.

Some of the incarnations that Vishnu’s Divine Energy, Lakshmi assumed when He incarnated are given in the table below.

2. Spiritual experiences obtained by others

Spiritual experiences depend upon the spiritual emotion. Since Kansa, Jarasandha, etc. hated Lord Krushna they got the death penalty while devotees actually realised Him. The glory of the incarnations of God on the earth (bhulok) spreads even upto the Satya region (Satyalok) so that becomes their spiritual experience.

3. Effect on God due to His assumption of an incarnation

The Lord incarnates to restore deteriorated Righteousness (Dharma). His internal or external opulence serves only people, not Himself; hence incarnations are eternally liberated and the state of further exaltation of the embodied soul is absent in them. Therefore their independence and Liberation are eternal.

4. Incarnations and rebirth of the spiritually evolved

The spiritually evolved too assume incarnations like The Lord. Often a saint is said to be the reincarnation of another saint. This may create confusion regarding the incarnations of The Lord and of saints in the minds of some people. To avoid this, the table below gives the differences between them.

* Incarnations are not assumed according to destiny. Inspite of this ‘How is it that Rama had to take birth again as the incarnation Krushna in which He had to renounce His body after He was shot at with an arrow by Vali who was reborn as a hunter and whom He had slain with an arrow in the previous birth?’ is what some people wonder. Such examples are given only to emphasise the point that ‘one should not trouble another’. In reality in case of incarnations the concept of destiny does not hold good at all because throughout their lives their actions are non-actions (akarma karma).

5. Celebrating the birth anniversaries of incarnations

The birth anniversaries of incarnations like Rama, Krushna, etc. are celebrated because the renunciation of Their bodies does not mean death. At any moment They can assume a body for the sake of Their devotees. This implies that They are immortal. The death anniversaries of saints like Saint Dnyaneshvar are celebrated because at birth They are usually only average persons or seekers but later with spiritual progress They attain sainthood. After renunciation of the body They attain the Final Liberation (Moksha). Then Their mission is augmented as the energy expended by the body when alive is conserved and utilised for the mission. Their death anniversaries are celebrated as a mark of remembrance of such great souls. In case of average persons however the rite for the departed (shraddha) is performed on the death anniversary.

Idols of deities like Shiva, Vishnu, Parvati, Lakshmi, etc. are existent since the beginning of the universe. Those of incarnations however, are made after completion of their mission.