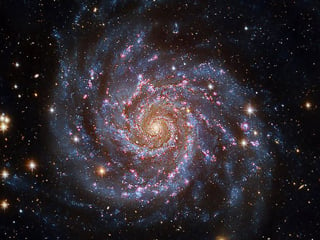 The word svayambhu [self-manifest (स्‍वयंभू)] has been derived from two words svayam (स्‍वयं) and bhu (भू). Svayam means by oneself and bhu bhavati means to be or to exist. Origin of The Lord’s resolve of ‘Let Me manifest in several forms from My being single (एकोऽहं बहुस्‍याम्‌)’ is called Svayambhu. This thought of creation is extremely subtle.

For both, creation of the universe from The Supreme God and its blending with Him, that is for its dissolution, the following five components are necessary : 1. The thought of creation and its occurrence accordingly, 2. Merging with The Supreme God again and experiencing Bliss from it, 3. Components required for the merger, 4. Sustenance of creation for sometime and 5. Multiplication of creation.

Among these components 1. ‘Creation’ is immediately followed by 2. ‘Merging with The Supreme God’. The order is not 1. Creation, 2. Sustenance, 3. Multiplication, 4. Components required for the merger and 5. Merging with The Supreme God, because after creation if one is not shown how much Bliss there is in the experience of union then no one would have paid any attention to the factors necessary for the union, not realising the significance of the union after sustenance and multiplication.

The five components in the order given above are said to be Prajapati, Brahma, Shiva, Vishnu and Minakshi respectively. Let us refer to Them as the five deities (panchadevata). Detailed information on Them is given below. According to another school of thought the order of these five components is Prajapati, Brahma, Vishnu, Shiva and Minakshi. Creation is the mission of the masculine principle whereas sustenance and growth are those of the feminine principle.

1.3 The five deities (panchadevata) and the universe

Prajapati, Brahma, Shiva, Vishnu and Minakshi of every universe (brahmanda) are different. However The Supreme God and God of all the universes are the same.

1.4 The three deities and the three components

1.5 Ability for creation, sustenance, dissolution and manifest energy of the five deities

1.6 Creation of some main deities

When two objects interact, a new object is created. For instance when the colours blue and yellow are mixed a green hue is created; two atoms of hydrogen and one atom of oxygen unite to form a molecule of water. In the same way when energies of two deities merge, a third deity is created. For example the sattva predominant Shiva principle and the sattva predominant Minakshi principle jointly give rise to Ganapati. In simple mythological terminology this is explained as Ganapati, the son of Shiva and Parvati. The following table shows how certain deities were created. Deities associated with Shiva, Vishnu and Divine Energy (Shakti) are given in ‘Science of Spirituality : Vols. 9 A, 8 and 9 B’ respectively. In the table below reference of the sattva, raja and tama components with regard to Shiva, Vishnu and Minakshi (Divine Energy), that is with regard to Their supporting the three components is made. They are actually beyond the three components.

Vruddhadev (the oldest among deities, because He is the first deity); Kameshti dev (the one who fulfills desires); Dayanidhi / Nidhichang (creation itself is considered as an act of compassion).

2.3 How did Prajapati bring about creation?

A. One school of thought: Prajapati was created from God through the medium of Svayambhu. Thereafter He was alone for several years. Basically His existence was potent but unmanifest. He then thought to Himself, ‘I should manifest in several forms from this single form (एकोऽहं बहुस्‍याम्‌)’. Hence He undertook austerities for a long time. Due to the powers acquired from this penance He created an energy endowed with a feminine polarity. That energy is called the Primal Mother, Aditi. Aditi (अदिति) is derived from adihi (अदि:) and atihi (अति:). Adihi means the foremost and atihi means one who is manifest. Aditi also means one who is limitless.

Aditi (आदिति) is also written as Aditi (आदीति) [Adi (आदि)+ iti (इति)]. She is called Aditi because She is the only woman created by Prajapati. Aditi is also known as Brahmakumari, Yoshiti and Vadini.

According to the Purans Prajapati created a feminine energy from His left shoulder. In other words He granted a manifest form to the unmanifest.

B. Analysis in the form of a story: When the Primal Mother (Aditi) was born She was blossoming with youth. Prajapati asked Her “What should I do to become manifold ?” She replied, “You are great. I will not be able to bear Your children”. So with Aditi as the medium Prajapati created 26 daughters. These 27 young women including Aditi accumulated 27 ova (27 principles were thus created). Then Prajapati created two drops of semen in His mind [by means of resolve (sankalpa)]. A son born from one drop of semen is called Bruhaspati. Basically He is the first son of the Primal Energy (Adishakti). Prajapati gave the second drop to the atmosphere and Narad was born from it.

C. Analysis according to astronomy: ‘Prajapati was overcome by lust at the sight of His daughter and assuming the form of a deer had intercourse with her. The deities condemned this as a base and punishable offence. But none of them were capable of punishing Him. Hence all of them accumulated the fearsome component from their bodies and created a ferocious being. That is Lord Rudra. Rudra shot down Prajapati with arrows.

This Rudra is the hunter in the sky. The star Rohini is the daughter of Taraka Prajapati. In the skies one can view a deer chasing Rohini and Prajapati in the form of a deer struck in the abdomen by the tri-pronged arrow shot by the hunter. The semen ejaculated by Prajapati at that time created various living organisms. Then the deities were pacified and venerated Prajapati.’(2)

D. Analysis according to the physical sciences:

A. The deity of creation and nurture

B. Prajapati and other deities

C. The deity of sacrificial fires (yadnyadev) and the deity who fulfills all desires (kameshtidev)

E. Prajapati and music : Prajapati frequencies are created in a rhythmic fashion. This rhythm is composed of two principles – aroha and avaroha. Prajapati frequencies are responsible for sexual stimulation in both, the man and the woman. The aroha and avaroha principles originate from sexual stimulation of the woman and the man and enter the bodies of the woman and man respectively, through the openings of the sweat glands. These frequencies unite near the earth (with the physical bodies of women and men) and on the invitation of Bruhaspati reach Prajapati. As a result one is able to go to Prajapati that is upto the basic ether (mul akash) element through the medium of these frequencies, that is through music. Prajapati is the presiding deity of creation (hence He is the chief deity of the science of Music as well). Singing verses from the Samaveda (samgan) was first done to appease Prajapati. It is a science by itself. Those who can sing Vedic verses can experience Prajapati. Gandharvaveda is a sub-part of the Samaveda. Music means Prajapati. Music which does not generate progeny is not real music. Prajapati’s first daughter is Vinavadini (the one who plays the vina, a stringed musical instrument). She is also called Sarasvati or Dnyandevi (deity of knowledge).

F. Control over the sheath of Bliss : This sheath is always calm and cheerful and waves of Bliss emanate from it. Pleasurable feelings (mod), pleasure (pramod) and Bliss dwell in it. Prajapati controls the sheath of Bliss of living organisms. He exists in every object in which Bliss is generated. 27 aphorisms (suktas) from the Rugveda are on Prajapati. Some of them are written by women under the pseudonym Brahmavadini. Brahmavadinis have offered the Bliss experienced by them during intercourse with their husbands, to Prajapati.

2.5 Science behind the idol

Crown: It has a golden horn on it.

Countenance: The idol has been described as having a face like that of animals such as a goat, a horse, a bull, a peacock, a rooster, a monkey, etc.

Meaning: Prajapati’s appearance resembles the union of a man and a woman during intercourse – (Bruhadaranyak 1.4.3).

A. Like Lord Brahma He too has no sect of His own. He is a deity who lives without any motive.

B. He is not mentioned in the sects of other deities; however references to His daughters have been made repeatedly.

C. It is easy to attain God through the medium of Prajapati. But no reference has been made about Prajapati with respect to realising God during the post-Vedic period.

E. His first assistant being Bruhaspati one can attain Him through the medium of Bruhaspati.

F. According to the Rugveda if one observes the rules laid down by Him one is able to attain Him.

G. He is appeased with austerities and after He is pleased He directs one to Lord Brahma.

H. First chant Prajapati and the Name of a superior deity which one has not chanted before, for two minutes each. Note the spiritual experiences obtained on both occasions and then read the following paragraph.

At a satsang (spiritual meeting) after chanting Prajapati and the Name of another deity, seekers got the following spiritual experiences.

Now one will realise why Prajapati is believed to be a deity unworthy of worship.

Brahmadev. (Some consider Brahma and Prajapati as one and the same.)

B. Ability and manifest energy
Ability : Creation 70%, sustenance 20% and dissolution 10%
Manifest energy : 10%
Energy : ‘Brahmani is Lord Brahma’s consort. Her other Names are Shatrupa, Savitri, Sarasvati and Gayatri. Lord Brahma created a woman tearing off half His body. She is Brahmani the Divine Energy (Shakti) of Lord Brahma.’ (3)

3.5 Science behind the idol

‘The word Brahman being of the neuter gender cannot be the object of ritualistic worship (karmakand). Scriptures of the deities state that only a deity of the masculine or feminine gender is worthy of worship. That is why Vedic ritualistic worship accorded such a status to Indra, Agni, etc. instead of Brahman. Nevertheless since spiritual practice of philosophers was on a psychological plane they were not at all concerned with various Vedic deities and could easily accept the concept of Brahman as they naturally professed the theory of unity in diversity and non-duality in duality.’ (4) Most people probably do not worship Lord Brahma as they believe that it is He who got them entrapped in the bondage of birth and death by creating them! Lord Brahma is worshipped only in the place named Pushkaraj.

A. Origin: Min (मीन) + akshi (अक्षी) = Minakshi (मीनाक्षी). Min means subtlemost, to carry, flow, a river, speed or transformation. Akshi means the ability to receive or to give and receive. Minakshi is thus that which possesses the capacity to imbibe the subtle into the self, bring about its multiplication and then transmit it to the other constantly.

B. Another Name: Kumari

C. Abode: Minakshi’s region (Minakshilok) is the region where the process of multiplication of subtle forms continues.

D. Science behind the idol : One does not come across idols of this deity anywhere. The complexion varies according to the mission – it may be yellow, blue, black, etc. Generally She is described as a ten year old girl. However the famous Minakshi temple in South India is not of this deity; it is of another deity with the same Name.

E. Spiritual practice: Minakshi is not worshipped in Her original form as Minakshi but as Parvati, Lakshmi, etc. Information in this regard is given in ‘Science of Spirituality : Vol. 9 B – Divine Energy (Shakti)’.