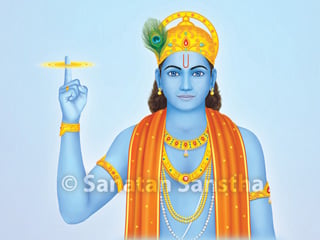 1. Who assumes an incarnation

‘Creation, sustenance and dissolution are the inherent qualities of Nature. Brahma, Vishnu and Mahesh respectively are considered to be the originators of these qualities. The responsibility of nurturing creation lies with Vishnu. Hence when there are disturbances in creation, the process of destruction is enhanced and there is a disruption of Righteousness (Dharma) in human society. At that time He stops the destruction, re-establishes Righteousness and leads man onto the path of Righteousness. To fulfil this mission Lord Vishnu incarnates in every yug (era).

2. Where is the incarnation born?

By Nature’s law an embodied soul should assume its body from its parents. In accordance with this law The Supreme God too chooses people who have the virtues of kindness, sacrifice, penance, etc. as parents to assume an incarnation.’(1)

‘Effort is not required to grow wild plants unlike the process of grafting an hybrid. Just as a farmer ploughs the land before sowing seeds so also after deciding where to take birth The Lord appears to inspire the chosen couple to perform some austerity. To cite examples from holy texts, before the birth of Rama, Dasharath His father, performed a sacrificial fire to acquire a son (putrakameshti yadnya), before Hanuman’s birth His mother Anjani too undertook severe austerities. Similarly the biographies of various great saints like Markandeya, Ramavallabhdas, Purandardas, Morya Gosavi, Chidambar Dikshit, Basaveshvar, etc. also quote that Their parents had undertaken austerities before giving birth to Them.’(2)

‘In the parables of Narayan from the Mahabharat (Mahabharat Shantiparva 399) there is a discussion on the six incarnations namely, Varaha (the boar), Nrusinha (the man-lion), Vaman (the dwarf), Bhargavrama, Dasharathirama and Vasudevkrushna. Further in the same chapter there is a mention of the Hansa (swan) incarnation. Thus by the exclusion of Buddha there are ten incarnations in all. In some books the number goes upto twelve. The twenty-four incarnations described in the Bhagvat Puran (6.2.7) are 1. Narayan [the Absolute Being (Virat Purush)], 2. Brahma, 3. Sanatkumars (constituted by four of Them), 4. Naranarayan, 5. Kapil, 6. Dattatreya, 7. Suyadnya, 8. Hayagriv, 9. Rushabh (the bull), 10. Pruthu, 11. Matsya (the fish), 12. Kurma (the tortoise), 13. Hansa, 14. Dhanvantari (the physician of deities), 15. Vaman, 16. Parshuram, 17. Mohini, 18. Nrusinha, 19. Vedavyas, 20. Vyas, 21. Balaram, 22. Krushna, 23. Buddha and 24. Kalki.

All these incarnations are famous as the lilavatar meaning the incarnations displaying The Lord’s divine sport. In the Purans which were written later the number of incarnations is fixed at ten. They are 1. Matsya, 2. Kurma, 3. Varaha, 4. Nrusinha, 5. Vaman, 6. Parshuram, 7. Rama, 8. Krushna, 9. Buddha and 10. Kalki.’ (3)

‘The number of incarnations of Lord Vishnu are infinite. Based on this, the holy text Harivansha states “Lord Prajapati says that Lord Vishnu has assumed innumerable incarnations in the past and so will it be in the future”.’ (4)

4.1 According to the teachings of H.H. Kane Maharaj

A. Internally the incarnations from points 1 to 4 are absolute but concepts about them are created based on their mission. (The percentages mentioned in brackets below have not been given by H.H. Kane Maharaj.) Though the incarnations from points 2 to 4 possess the qualities of omniscience and omnipotence of The Lord their use is limited to the mission which they are supposed to accomplish.

B. Becoming an incarnation ourselves: Either because of the love for ignorance or the ignorance of love one feels that only ten incarnations of The Lord have been described. The eighth incarnation, Shri Krushna and the ninth, Buddha have already taken birth. The one remaining now is Kalki. But will we live to see an incarnation?

C. An incarnation from moment to moment: I say that God incarnates every moment. If one observes carefully one will note that whenever one’s attention gets drawn towards rajasik (raja predominant) and tamasik (tama predominant) objects an attempt to restrain it with the power to discriminate between right and wrong (vivek) and to convert it into the sattvik (sattva predominant) attitude is made. This too occurs because of Righteousness, that is God Himself does it through the medium of the power to discriminate between right and wrong. As one’s sattvik attitude gets polluted with raja-tama components The Lord Himself intervenes in the form of that power and makes the attitude sattvik and pure. Thus one can call this an incarnation of God at every moment.

Incarnations are assumed with a mission,
Some manifest whereas others remain obscure.
Only the one who has realised Brahman recognises them.
What will the ignorant realise?

This is a verse from Shri Gurucharitra (3:78). It is believed that there are only ten incarnations, but this is said only grossly. If one views carefully then one will realise that the tradition of incarnations is continuous. The process of going from sattva to tama and consequent deterioration in Righteousness (Dharma) goes on constantly. That itself is the very nature of Prakruti (creation) just like water which has the inherent tendency to flow along a gradient. And when there is a possibility of the tama component reaching a peak, an absolute incarnation (purnavatar) manifests. Internally all saints are absolute. Though They possess the attributes of omniscience and omnipotence yet in accordance with the mission for that period (kal) they are used only limitedly. Hence the ignorant do not refer to Them as incarnations, that is all. Saints give Their close disciples an intense realisation that ‘I Myself am an incarnation of The Lord’. In this context, Saint Eknath says that only a liberated soul (jivanmukta) will recognise another. The Lord has said ‘सर्वथा वर्तमानोऽपि स योगी मयी वर्तते ।’ in the Shrimadbhagvadgita 6:31. This means that since the mode of speech (vani) of all saints and Their close disciples is in accordance with the Vedas, it is divine. So, irrespective of Their outward behaviour They have merged into Me. Saint Dnyaneshvar poses a question as to ‘why the chance utterance of words (disciples) of these saints may not be called the Vedas?’. Thus it can be said that as an individual becomes more and more sattvik (sattva predominant) The Lord Himself gets the mission of reinstatement of Righteousness (Dharma) accomplished from him. Considering the influence of the yug (era) and the passage of time the code of Righteousness in man constantly changes. Despite that, saints mould his mental state in such a way that he is able to realise the truth.

Buddha is the ninth incarnation in the Kaliyug and is going to continue in this yug. Here the Buddha incarnation does not refer to Goutam Buddha. It is just that the first (adi) Shankaracharya has considered Him as an incarnation because of His sattvik temperament based on the lines from the Gita ‘यद्‌ यद्‌ विभूतिमत्‌ सत्त्वम्‌’. The Buddha incarnation is the one whom one can recognise with pure intellect (buddhi) alone. One such description from the holy text Shri Gurucharitra says, ‘In the Kaliyug Buddha became a mouni (observer of silence). He discarded His garments and became nude’. Here Buddha is the one who can be recognised only with pure intellect. Mouni refers to the one who will not necessarily speak in accordance with the Vedas. Though His speech is in accordance with the Vedas, superficially it does not appear so. In the above quote the garments depict conduct and discarding them and becoming nude refers to not following the Vedic code of conduct. That is why it becomes difficult to recognise saints like Bhaktaraj Maharaj. Those who recognised Him were indeed very fortunate. Only such a fortunate one, the worthiest of devotees can recognise Bhaktaraj (King of devotees) Maharaj. Their spiritual practice is like that of the gopis (wives of the cowherds) towards Krushna. It is called non-Vedic spiritual practice of the Vedas. However it is not accomplished through the spiritual practice of love prescribed by the Vedas. It has progressed with the pace of a bird (vihangam marg). The vihangam path refers to acquiring the result instantly, like the bird. The path of attaining God very slowly like an ant is called the pipilika (ant) path. Even here it is a relative term. If the grace of the Guru is showered upon the one adopting the pipilika path in spiritual practice then he becomes eligible to undertake the non-Vedic spiritual practice of love and at that very moment reaches the zenith. Hence Bhaktaraj Maharaj is a Buddha incarnation or an absolute incarnation (purnavatar). Only with pure intellect acquired by the grace of the Guru, bestowed as a consequence of intense service rendered unto Him, while in satsang (holy company), can one recognise Him.

4.2 According to the Bharatiya Sanskrutikosh

A. ‘Absolute and partial incarnation

B. Eternal incarnations: According to the quote “Whenever I experience divinity I fold my hands in obeisance” wherever there is a manifestation of some qualities of God, to some extent, it is called an eternal incarnation.

H. Incarnations of personages (vibhavavatar): They are believed to be thirty-nine in number. Dhruv, Kapil, Madhusudan and Padmanabh are the personages included in them (Ahirbudhnya Sanhita 5.50).

5. Vyuha (constellations of deities) and incarnations

‘The Shantiparva of the Mahabharat describes the Narayaniya sect. This sect was first propagated by The Lord to Arjun and then to Sage Narad (Mahabharat Shantiparva 346.10-11; 348.6- 8). Later Sage Narad formulated the doctrine of vyuha in the Narayaniya sect. Vasudev, Sankarshan, Pradyumna and Aniruddha together were the four elements of the doctrine. Here Vasudev is The Supreme God and The Creator of the universe. Sankarshan is His second form. He can be considered as the representative of living beings. Pradyumna who originated from Sankarshan symbolises the mind. It is from Pradyumna that Aniruddha who represents ego is generated. All these four are forms of Narayan. The doctrine of vyuha can be explained as follows.

At the beginning of a kalpa Lord Vasudev creates not only the unmanifest basic Great Illusion (mul Prakruti) but along with it also Sankarshan, a particular embodied soul or vyuha. The mind manifests through the union of Sankarshan and the Great Illusion and is represented by Pradyumna. It is from Aniruddha that the cosmic elements and their components are created. Lord Brahma too is created at the same time and with the help of the elements He creates the universe consisting of living beings.’ (6)