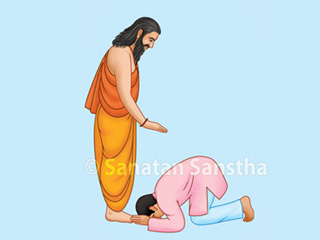 God is also called Svayambhu. Svayambhu (स्‍वयंभू) has been derived from two words svayam (स्‍वयं) and bhu (भू ) meaning the one who has originated from Himself. In other words He is the one who manifests from the unmanifest, formless state. God is also referred to as Prabhu (प्रभु) in the same context. The word Prabhu is derived from pra (प्र) and bhavaha (भव:) meaning the one who originates or manifests with divine intensity. It is said that, that which prescribes the code of conduct is Righteousness (Dharma) (‘आचार: प्रभवो धर्म:’) and that Righteousness is none other than Lord Vishnu (‘धर्मो वै विष्‍णु:’). ‘धर्मस्‍य प्रभु अच्‍युत:’ means Achyut (Vishnu) is the creator of Righteousness [Eknathi Bhagvat – adhyay (chapter) 14]

In the Shakta sect, He is called Adishakti (Primal Energy). This word is not of the feminine gender but is illustrative of His qualities.

That part of The Supreme God from which the universe has been created is called God (Ishvar).

Meaning: Even if one were to make ink by mixing the powder of a black mountain in the sea and were to make a pen from the branches of the kalpataru (wish-fulfilling tree) and if Sarasvati (deity of knowledge) were to write down a list of the qualities of The Lord, their description would still remain incomplete.

Even if one makes ink from the seven seas,
A pen from the entire forest,
Uses the entire earth as a writing paper
The qualities of Lord Hari still remain beyond description
– Saint Kabir (Holy text 48)

If Thy glory is sung before Thee
It cannot be contained in the entire universe
If one makes a pen of the Meru mountain,
Ink of the ocean and uses the entire earth as a writing paper
Even then it will not suffice
– Saint Tukaram Maharaj (Gatha)

One realises that nothing remains unsaid after reading the description of The Lord expressed in the same way in different languages by various saints, e.g. in the 8th century by Shri Shankaracharya in Sanskrut, in the 15th century in Hindi by Saint Kabir of North India, in the 17th century by Saint Tukaram of Maharashtra in Marathi, etc. Nevertheless the matter which follows will assist in comprehending the concept of God atleast to some extent.

3.1 Special features of The Supreme God also present in God

Omniscience: This is because of His spiritual knowledge and not frequencies.

Bestower of Serenity or gratification

Existence in the form of society

3.2 Features related to the mission

This has occurred because of Me
But I have not done it.
He who has realised this is liberated
From the cycles of birth and death.
– Shri Bhavarthadipika (Shri Dnyaneshvari) 4:8

Literal and implied meaning: In ‘This has occurred because of Me’, ‘Me’ refers to The Supreme God principle in oneself. ‘But I have not done it’ implies to absolving oneself of the sense of doership. A beautiful example to illustrate this is the sun which awakens everyone and makes the flowers bloom, when it rises. This happens simply with its existence. The sun does not ask anyone to wake up or the flowers to bloom.

‘All objects in the universe arise from a common point akin to the infinite radii originating from the centre of a circle, and progress spiritually. This great focal point is generally referred to as “God (Ishvar)”. In the Gita (9:4) The Lord says,

Meaning: I pervade this entire universe in the unmanifest form. Though the entire creation is within Me, I am not within it.

This is a fascinating, great circle the centre of which is everywhere but the circumference is nowhere. The nature of the ultimate truth will be like this circle or its centre.’(1)

Existence in His own creation: When God created the universe He incorporated Himself in each and every particle. Contrary to this, there is no existence of other creators in their creation, for instance when a potter moulds a pot he does not exist in the pot.

3.3 One who can assume a form or become formless

Here assuming a form means God supports the three components assuming a visible form. It is due to the tama component that materialisation of God’s unmanifest form occurs and He manifests Himself. The following examples will illustrate the meaning of form and formless.

A. Why does the formless assume a form?

B. In which forms does He manifest?

C. Name and form of the manifest form: When God manifests Himself He carries out His mission assuming a form and a Name like Shiva, Vishnu, Brahma, Prajapati, Minakshi, etc. Even the complexion of every form is predetermined. Some examples are enlisted below.

* Information on divine blue water (niltoya) is given in ‘Science of Spirituality: Chapter 38 – Path of Activation of Spiritual Energy (Kundaliniyoga)’.

D. Form of His weapons and their use: In this context the weapons of forms of God, such as Vishnu, Shiva, Lakshmi, Parvati, etc., incarnations and deities have been taken into consideration. Here, all of Them together are referred to as the God principle. Of the three types of weapons – physical psychological and spiritual only those which are required to vanquish the enemy are used by the God principle. Only gross instruments have been discussed here. Weapons in the psychological plane are defeating the enemy with the mind or the intellect. A spiritual weapon is one which destroys an enemy merely with a resolve (sankalpa) or the presence. More information on this is provided in ‘Science of Spirituality: Vol. 4 – Path of Guru’s Grace (Gurukrupayoga), point 1 B 4. Mechanism of action of the Guru’s grace’.

Use: Generally weapons are used based on the following rules.

Absolute Truth is that which is permanently existing since times immemorial, is one without a beginning and is eternal. Absolute Consciousness means divine consciousness (chaitanya) or spiritual knowledge (dnyan). (Differences between happiness and Bliss are given in ‘Science of Spirituality: Vol. 1 B – Spirituality’.) God is immortal but man is not.

God is eternal and so is His religion (Dharma). That is why the Sanatan Dharma which is existing since times immemorial is true. (नित्‍य नूतन: सनातन: । means that which is always new, full of divine consciousness (chaitanya), which never ages, that itself is Sanatan) All other religions being man-made cannot be religions of the eternal God. (In reality they are only sects. The difference between a religion and a sect is explained in our book ‘Science of Spirituality: Vol. 1 A – Righteousness (Dharma)’. Thus God is the sustainer of Righteousness personified. (When one says that sugar is sweet, sweetness is the quality and sugar is its possessor.) A quote says ‘यज्ञो वै विष्‍णु: ।’ meaning a sacrificial fire (yadnya) is Vishnu (implied meaning: God). Another quote ‘धर्मस्‍य प्रभु अच्‍युत: ।’ means the founder of Righteousness (Dharma) is Achyut (Vishnu, God). In the Eknathi Bhagvat (14:167) it is said, ‘My form which is beyond the Vedic scriptures is My true form’.

This is His very form, His nature. Usually love (prem) is used with reference to worldly love and spiritual love (priti) with a spiritual connotation. Spiritual love is devoid of expectation.

Like man God too is fond of praise. God operates through the medium of saints and people praise saints for Their mission! However saints too being creation of The Lord They also realise this and hence sing His glory. In short, since God cannot praise Himself He gets it done through saints!

3.9 The one who likes stories on God’s divine play

‘God likes stories on His divine play and biographies. But that is not all. Those who read them with intense spiritual emotion (bhav) are blessed by deities and saints. This is an attribute of God. Since biographies of saints and deities are pure, sacred, noble, intense, glorious, flawless, illustrative of might, conquer time and directions, always new, bestowing divine consciousness and Bliss, illuminating the path of truth, overcoming the barrier of falsehood and the Great Illusion (Maya) and full of benefaction and beauty, God likes them. Hence saints bestow Their grace on those who read these biographies.’(3)

3.10 The one who loves His devotees

Does The Lord not worry about you ?
Hence, one should remember Him (chant His Name) constantly. – Saint Tukaram

B. God neither loves nor hates anyone. However by the law of reflex action, depending on the motive He is closer to those who love  Him and the one who hates Him is ruined. [In other words whatever actions God performs are non-actions (akarma karma). The law of karma is not applicable to Him.] The love or hatred expressed towards God boomerangs onto oneself tenfold.

3.11 The one who bestows His grace

God takes care of both the worldly as well as spiritual needs (yogakshem) not only of His devotees but also of others. However due to ego, man does not realise this. Initiation (anugraha) is but another term for The Lord’s grace. Yoga means bestowing that which is beyond acquisition and kshem means protecting that which is already obtained.

‘अभीष्‍टसम्‍पादनेच्‍छारुप: प्रसाद:’ means the grace (of The Lord) bestowed as a result of the desire to acquire certain things is known as an initiation (anugraha) [Nyayakosh]. The Guru is God and vice versa. In all sects, importance is attributed to The Lord’s grace in the form of His blessing. In the Shrimadbhagvadgita Shrikrushna has explained the importance of His grace as ‘मत्‍प्रसादादवाप्‍नोति शाश्वतं पदमव्‍ययम्‌’ (18:56) which means My devotee attains the eternal all pervading principle with My grace (initiation). All sects following the Path of Devotion (Bhaktimarg) believe that only with The Lord’s grace, that is His blessing acquired by intense devotion can one acquire supreme benefaction. According to Shrivallabhacharya, the Path of Devotion is itself the Path of Pushti (Pushtimarg) in which pushti is referred to as The Lord’s blessing.

Since God is compassionate, even by slaying His enemies whenever necessary, He has spiritually uplifted them.

3.14 The one who works secretly

God carries out His mission in secrecy. He concealed His identity even from Saint Eknath when He worked as the servant named Shrikhandya in His house.

Meaning: When deities wish to destroy someone they snatch away his intellect. Then unfavourable events begin to unfold. – Mahabharat 5.34.81

3.15 The one who considers His devotees more important than Himself

3.16 Possessor of the six qualities

God sings the glory of His all pervading abode in the following way.

Meaning: O Arjun, God is established in the heart of all cosmic elements which are (as if) seated on a device (physical body) and which God controls with His Great Illusion. – Shrimadbhagvadgita 18:61