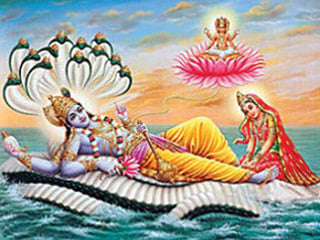 1. Origin and meaning of incarnations

‘The word avatar (incarnation) is derived from two words ava (अव) and tru (तृ). Descent from a higher status to a lower one itself is an incarnation. Thus when The Lord leaves His abode, Vaikunth and descends to the earth (bhulok) to accomplish His mission as given below, He is said to have assumed an incarnation. When The Supreme God assumes the physical form of an animal or a man and spends some period or the entire lifetime in that form, that physical form is called an incarnation.

2. Origin and development of the concept of incarnation

In the olden days people worshipped some human beings or animals considering them either divine or the manifestations of a deity. With the passage of time such meritorious animals or people were considered as incarnations of The Supreme God. For instance, Tibetans believe the Dalai Lama to be an incarnation of Avalokiteshvar. A specific and supernatural energy of a dead person exists in an animal; hence its ritualistic worship (puja) is important. This concept of the primitive man appears to have persisted in the concept of incarnation.

The following verse (shloka) (10:41) from the Shrimadbhagvadgita complements this.

Meaning: (O Arjun) realise that every object endowed with opulence, wealth or strength that you see has originated from a part of My radiance.

The principle of incarnation propagated through the Purans and other holy texts is a basic tenet of the Hindu religion of the middle ages and the recent times.

The concept of incarnation first originated in the Vaishnav sect. After it gained popularity other sects like the Shaiva, Shakta, Ganapatya, etc. also adopted it. The Shiva Puran narrates how Lord Shiva assumed incarnations just like Lord Vishnu in order to protect saints and destroy evildoers. Incarnations of Shiva like Kalbhairav, Sharabh, Yadnyeshvar, Mahakal, Ekadash Rudra, Hanuman, Nartakanat, Avadhuteshvar, Vrushesh, etc. are described in the Shiva Puran. Sati, the first consort of Shiva and the daughter of Daksha reincarnated as Parvati, the daughter of King Himalay and became Shiva’s consort again. Parvati is called the Primal Energy (Adimaya or Adishakti). She too has assumed several incarnations in order to slay demons. The main deities have other deities as part of their retinue. They too assume human incarnations along with their master or to accomplish a special mission. Lord Ganesh has also assumed several incarnations as Ganesh, Vighnesh, Mayuresh, Siddhivinayak, etc. in the various yugs (eras) as mentioned in the Ganapatya Puran.

Although Jains do not believe in incarnations they have modified the Hindu concept of incarnation and accepted it. Tirthankars are born as humans and attain divinity by undertaking austerities. Tirthankar means the stepping stone (tirtha) for souls to cross the ocean of worldly life. The Sanatan religion too considers upliftment of the world as the mission of incarnations.

3. Basic doctrines of an incarnation

The main doctrines behind the concept of incarnations are as follows:

A. When the three components sattva, raja and tama were created they realised that there must be a creator. They undertook severe austerities to realise Him. This appeased God and He told them to ask for a boon. They responded saying, “Please accept us, otherwise people will consider us as the culprits.” Then The Lord who is actually beyond the three components (trigunatit) accepted them and assumed incarnations. Since then the three components came to be known as the ‘triguns’. In reality, due to The Lord’s acceptance they became unmanifest (nirgun), that is there was no difference between the manifest (sagun) and the unmanifest.

Saints refer to reinstatement of Righteousness as progress. In Their eyes worldly progress is not real progress. It is then that one realises that we are not progressing but in reality are regressing because incarnations have to transform the Kaliyug generated from the Satyayug back into the Satyayug. Outwardly the Kaliyug will continue but due to augmentation of the sattva component and evolution of man his inner world will become happier as if he is living in the Satyayug.

C. ‘Just as a free man is required to liberate a man in bondage or one awake is necessary to wake up one who is asleep, so also to transform the extroverted tendency of man to introversion, that is to release him from that human form and transform him into God The Lord has to assume a human form either as a man or a woman.’(2)

D. In the fourth adhyay (chapter) of the Shrimadbhagvadgita, Lord Shrikrushna has explained what incarnation The Lord assumes, when and why in the following two verses (shlokas).

Meaning: Whenever there is a deterioration in Righteousness (Dharma), that is when there is an upsurge of unrighteousness I assume an incarnation. – 7.

I incarnate in every yug (era) to protect sages, destroy evildoers and to reinstate Righteousness. – 8.

Implied meaning: Whenever there is a deterioration of Righteousness the Sanatan religion (Dharma) being divine in origin, that is a creation of The Lord Himself, plays a role in reinstating Righteousness. To accomplish that He assumes a manifest form.

Righteousness teaches man the art of learning to live like a real human being. Vivekanand has defined education as ‘becoming human mentally’. Though physically one is a man, mentally one is still not. Due to this very awareness our ancestors used to live in their Guru’s hermitage for twelve years. Those who had mentally attained manhood used to follow the path of detachment whereas those lacking in it used to follow the path of materialism.These materialists could overcome their lacunae by rendering service unto those following the path of detachment.

The Sanatan religion includes all the four classes (varnas). In Shankarbhashya (commentary on holy texts), Shri Shankaracharya has stated that Righteousness in a Kshatriya is dependent on that of a Brahman, that of a Vaishya on that of a Kshatriya and that of a Shudra on that of a Vaishya. Thus if Brahmans remain righteous then Kshatriyas too remain so. The state of the Vaishyas being dependent on Kshatriyas consequently the Shudras too remain righteous. There are two types of radiances in the world – that of a Brahman (brahmatej) and that of a Kshatriya (kshatratej). These two radiances are directly complementary to each other. Only if these two act cohesively then universal peace is assured. So in other words deterioration of Righteousness means disintegration of the structure of the four classes.

Once deterioration of Righteousness occurs there is dissolution of the relationship between those following the path of Spirituality whilst leading a worldly life and those who are on the path of detachment. This means that if worldly persons shirk their responsibility of taking care of the worldly needs of ascetics then it poses as an obstacle for ascetics undertaking austerities. They being devotees of The Lord, He assumes an incarnation to protect them. If one makes a careful analysis of incarnations one will realise that reinstatement of Righteousness is the principal mission of an incarnation. Protection of ascetics (sadhus) appears to be merely a by-product. When this process reaches the zenith, worldly people become cruel and begin harassing seekers. Thereafter destruction of evildoers to protect them becomes a mission of the incarnation.

Dr. Jayant Athavale: There is a saying that ‘A stitch in time saves nine’. According to this norm why does God not assume an incarnation as soon as unrighteousness begins to grow on the earth ? Why does He wait till there is chaos ?

Baba (H.H. Bhaktaraj Maharaj): Though dust gathers in the house throughout the day one does not dust the house time and again but sweeps it off only once in a day. God’s mission too is akin to this.

‘A police constable is sufficient to settle a minor dispute in a village. The inspector has to be sent for if the problem worsens. When riots begin, the police superintendent himself has to intervene. Similarly when there is fear of deterioration in the law and order of the human race it is the Inspector General, The Supreme God who has to descend onto the earth and settle it along with His platoon of saints and seekers.’(3)

The ones that incarnations like Rama, Krushna, etc. annihilated were the enemies of Righteousness (and righteous people); however nowadays no one is absolutely pure and holy. Each one is impure to sb vome extent. Consequently if incarnations decide to destroy the evil all over then no one will survive; hence (God) incarnations have to manifest to purify the intellect of man.

E. The secret of the lineage of incarnations according to the Purans: ‘Sages are the real saviours of society; that is why when the earth is faced with a calamity people surrender to them to help them overcome it. The earth then assuming the form of a cow seeks refuge in Lord Brahma. Lord Brahma narrates her woes to Lord Vishnu who Himself assumes an incarnation and destroys the evildoers and protects saints. Thus reinstating Righteousness He merges into His original form.’ – H.H. Kane Maharaj Narayangaon, Maharashtra

G. Rama abandoned Sita even when a mediocre washerman (rajak) expressed doubts about Her chastity; however despite Karna’s derogatory remarks towards Droupadi the Pandavs did not abandon her. The reason behind the difference in behaviour is the divine play of the incarnations which is conducive to the future missions that the incarnations have to perform and sometimes it is in accordance with wishes of Their devotees.

H. The desire that devotees should enjoy eternal happiness: ‘Why does The Lord need to incarnate to reinstate Righteousness ? Is a resolve (sankalpa) made by Him not sufficient ? The Lord can perform this mission with a mere resolve, but if He does not assume a human form how will one acquire that eternal happiness ?’ (4)

I. For devotees to obtain a form for the Name that they chant, for instance Rama, Krushna.

J. To praise devotees, to hear their praise and to embrace them

Let us sing about Thy virtues,
Let us listen to discourses of Thy glory,
My eyes yearn to see Thee,
My hands yearn to worship Thee with lotuses
I wait earnestly, My Lord, to embrace Thy body
adorned with four arms.
– Shri Bhavarthadipika (Shri Dnyaneshvari) 12:222-224

K. ‘Sage Durvas thought to Himself that if King Ambarish were to undergo the curse (of being born ten times on the earth) people would not benefit at all. On the contrary, if The Lord were to undergo the same curse then several people would benefit. So it would be most appropriate to let God fulfil the curse. Hence, Durvas said, “O Lord ! If You so desire, then You may go to the earth and assume several births.” Lord Vishnu was pleased with this. He agreed to incarnate on the earth ten times instead of the king and then vanished. In this way, Sage Durvas did a great favour on the world.’ (5)

‘In the holy text Kaldnyan, Brahmendraswami says, “The main mission of this incarnation of Adidattatreya is as follows –

L. Performing austerities at various places to bestow a thousand crore souls with birth as human beings, liberating them from the species of aquatic animals, viviparous animals, birds, etc.

M. Generation of science to improve the quality of life for this new downtrodden population which will arise from imparting human births to various species, as it will be under the influence of the Kali period.

N. Making other saints assume incarnations along with Himself so as to generate the righteous attitude among the people.

O. Upliftment of those souls of the lowermost cadre who even the saints cannot redeem.

Q. Providing energy to deities and augmenting the energy in places of pilgrimage.’ (6)