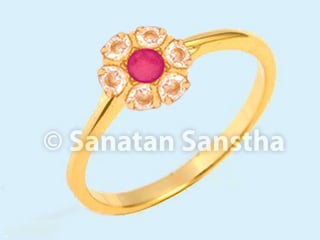 In every household, family members purchase ornaments for a new born infant. The primary objective is to dote on the infant. From birth, infants are very sensitive. To curb the attacks of negative energies on the infant and so that a protective sheath of Divine Chaitanya is created around the baby, he is adorned with ornaments.

Types of ornaments of infants: Normally, on the day of the naming ceremony, the baby is adorned with various ornaments.

A. Earring: This ornament is made from a thin gold wire. When the infant becomes twelve days old, the earlobes are pierced and a gold wire is inserted. Depending on the gold wire, an appropriate small red precious stone is strung on it.

B. Jiutiya (Pendant): The Deity who protects the infant is Jivantika Devi. On the fifth day after the birth of the infant, after stamping the form of Jivantika Devi on gold or silver, She is worshipped. After that, this stamp is strung on a gold chain or a black or red thread and tied around the infant’s neck.

D. Ring: This is the most known ornament. As far as possible the ring is made from gold.

E. Girdle: Normally this ornament is made from silver. It is worn around the infant’s waist. If it is not possible, then a black thread can be tied instead.

F. Ornament of the feet: There is a difference in the foot ornaments worn by an infant boy and girl. If the infant is a boy, then his legs are adorned with a thick silver Kada. Three proportionate tiny bells are also strung on it. Bells generate a particular type of sound (Nada). Due to the sound, the infant is protected from negative energies. In its place, many people adorn the infant’s feet with a copper Kada. If the infant is a girl then the ornament adorning her feet is an Anklet. For protection of the infant from negative energies, tiny bells are also strung on the silver anklet.

With increasing age the oversensitivity in infant boys keeps reducing. Hence, it is not necessary for them to adorn ornaments. But it is necessary for the infant girls to adorn ornaments later as well. Nowadays, on the pretext of infection due to germs and feeling the custom is not in keeping with the times, infants are not adorned with ornaments. Keeping in mind the importance of ornaments, infants could be adorned with ornaments.

Normally, the word ornaments is associated with women. Men are less sensitive than women. Hence, the possibility of attacks by negative energies on them is less. Therefore it is not necessary for them to wear ornaments. Moreover men are not very attracted towards ornaments as men are symbol of detachment and are the form of Shiva tattva in Maya.

Crown : In ancient times, this ornament was worn by men, especially Kings. The importance of wearing a crown are:

Kundala : This ornament is to be worn on the ears. After wearing this ornament, specific points on the earlobes get pressed resulting in the development of an attitude of detachment.

by both women and men

Some ornaments are worn by both women and men, like rings and gold chains. The ornament worn by men on their wrists is known as a Kada and an ornament worn by women is a bangle. Nowadays, men and women wear multicoloured bands on their hands.

Subtle experiment: Spirituality is a science associated with the subtle dimension. Subtle means that which is beyond the five senses, mind and intellect. One can understand the subtle dimension through subtle experiments. Look at the two pictures below and try to perceive what you feel by looking at them. Check if you feel good, distressed or nothing after looking at the pictures. Feeling good means rhythmic breathing, reduction in thoughts etc. Experiencing distress means having a headache, a burning sensation in the eyes etc.

Subtle experiment about ornaments – Wrist band and Kada worn by men: Look at picture ‘A’ and ‘B’, each for 15 seconds. See what you feel by looking at them and note your answer.

Through this, the subtle form of the band becomes clear. As per western culture, tying wrist bands on Friendship day and Valentine’s Day has become very popular. Contrary to gaining some benefit from wearing this band, there is loss from a spiritual perspective.

Through this, the adverse effects of wearing a wrist band becomes clear. Also through this, tama predominant band pressure is created around the wrist. Consequently, the points present on the wrist get pressed unnecessarily. With the absorption of tama predominant frequencies at these points through the band, these frequencies reach the associated body parts. Due to this, the functioning of those body parts reduces.

Usually the Kada worn by men on their wrist is made of copper. The subtle effect of a Kada indicates the following: A ring is an ornament that is worn on the fingers. The method of inscribing one’s name on the ring is from the times of Ramayana. In earlier times, the Kings and Emperors imprinted their insignia on the ring and used it as a stamp (Rajamudra). Hence, a ring is also called Mudrika. Nowadays rings are made of copper, brass, five-metal alloy etc. Five metal alloys mean gold, silver, copper, zinc and iron. These rings are made in various types of artistic designs and in various shapes.

Benefits of a ring:

It is evident from the above table why it is more beneficial to make a gold ring only. The Chaitanya acquired from a ring also depends on the shape of the ring. There are rings with different designs and different shapes on them like a serpentine shape, quadrilateral, square, circular and triangular. A persons gains Chaitanya as per the shape in a specific proportion.

The triangular design on the ring gives maximum benefits due to its shape as a Shakti-yantra. The acquisition of Chaitanya also depends on the inscription on the ring. Instead of inscribing English words, if sattvik symbols associated with Deities like the Swastikor ‘Om’, which is a symbol of the Nirgun Principle, are inscribed, then the benefit is more. Some people inscribe their name or a sign of some sects, due to which they do not get any spiritual benefit.

Spiritual experience of a seeker after wearing a gold ring : On 27th March 2008, I wore a seeker’s ring on my finger. After that I began feeling an unusual aliveness in my hand and I had the experience of the independent existence of the hand. I felt as if, ‘My vital energy was increasing because of the ring’. When I was paying obeisance (Namaskar) I saw a white light being emitted from the hand which had the ring. – Miss Ranjana

It is clear from the table that a maximum benefit of Chaitanya is gained by wearing a ring on the ring finger.

Reason underlying men wearing a chain around the neck and a ring during ritualistic worship, and women wearing ornaments on the entire body : As the worshipper is the central point of the ritual it becomes possible for him to absorb Chaitanya easily. During the ritual, due to the ring the subtle process taking place is as follows

However, as the actual participation of the woman in the ritual is less compared to that of the man, she is able to absorb Divine Energy in lesser proportion. For this reason, woman should wear different ornaments and imbibe the Divine Principle as per their capacity.

A chain is made of gold and silver. This is an ornament worn around the neck. Some people wear only a chain, whereas some people string one of the nine precious stones or a rudraksha onto it.

Subtle experiment about two types of chains worn around the neck: Look at the two pictures below for 15 seconds and note whether you feel good, distressed or nothing at all after looking at the pictures.

The gold chain shown in picture ‘A’ has a demonic design. According to a principle of Spirituality, the word, touch, form, taste, fragrance and energy coexist. Thus due to the demonic design of the chain, that is, due to its form, negative vibrations are generated from it. Due to negative vibrations, it becomes easy for the sorcerers (mantriks) to acquire black energy through it. The proportion of black energy increases in the body of a person who adorns the chain with such a demonic design.

The reason for getting good spiritual experiences by looking at chain B is due to the sattvik design. Due to the sattvik design of the chain, sattvik vibrations are created. As a result one gets good spiritual experiences. The sattvikta of the person who wears such chains is increased. On account of the sattvikta, virtues are generated in a person and the negative energies are distressed and the distress by negative energies to the person is reduced.

From this it is evident that wearing a chain is beneficial for a person, but the chain has to be sattvik. With a sattvik chain the beauty of the neck increases.

Spiritual benefits of a sattvik chain

With this, the spiritual importance of wearing a chain is highlighted. Some people wear a chain after stringing onto it a pendant with a picture of the object of their faith, a Deity, photograph of Guru or an imprint made of a photograph and other sattvik signs.

Generally a talisman, that is, an amulet is made of silver, copper, brass or some other metal in a quadrilateral or round box. Some people thread the amulet onto a black string and wear it around the neck while some tie it on their arm. Generally black thread is used for protection against black energy. However if it is bought by oneself from the market then it does not protect one but if it charged by mantras then it protects one for a certain time period – thereafter spiritual purification of the thread is required. If a black thread is used, it is essential to be alert about purifying the existing black spirals of negative energy on it from time to time.

The subtle negative process which occurs by wearing the amulet strung on black thread around the neck:

The same process occurs at the subtle level upon tying the amulet on the arm. If the amulet has the power to dissolve the spirals of raja and tama from the atmosphere attracted towards the black thread with the help of black energy, only then does the person get ten percent benefit. In short, use of a black thread or ganda tied with black thread is harmful in Kaliyuga. But, here a point to be remembered is that if the black thread is given by Saints, then do tie it. Due to the resolve (sankalp) of Saints, Chaitanya is generated in the thread. This helps in protecting one against negative energies. However considering the destroyer Energy generated, for an average person, using a red thread has more benefits as compared to a black thread.

Harm and benefits as per the metal of the amulet : If the amulet (Ganda) is made of silver or copper, then only are there some benefits acquired from it. As copper or brass have less ability to protect, negative energies can put a layer of their energy over a copper or brass ganda. To guard against this, the metal should be polished when it tarnishes and its spiritual purification should be done by putting it in the sun for a while.