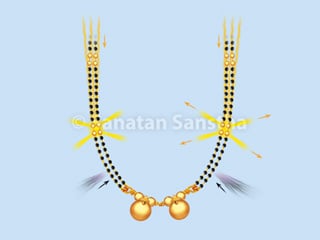 Hindu Dharma considers the mangalsutra to be a soubhagyalankar (Soubhagya is marital status of a woman and alankar is ornament) of the woman. This ornament is to be placed around the bride’s neck by the groom at the time of marriage. 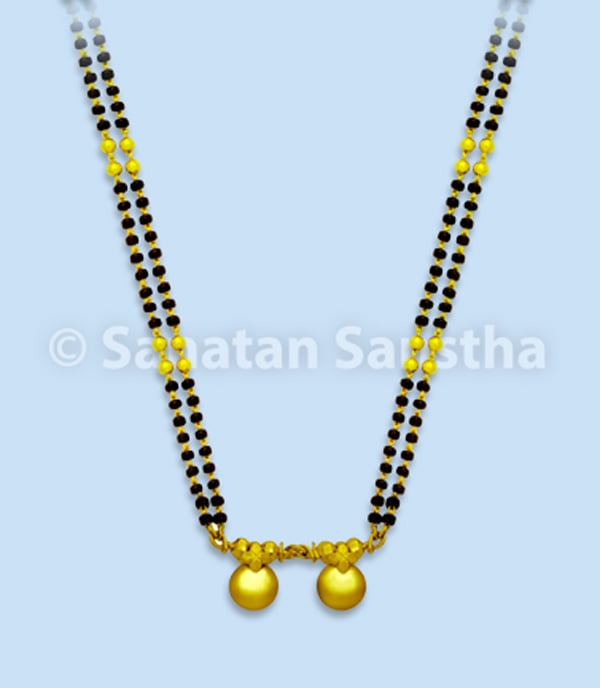 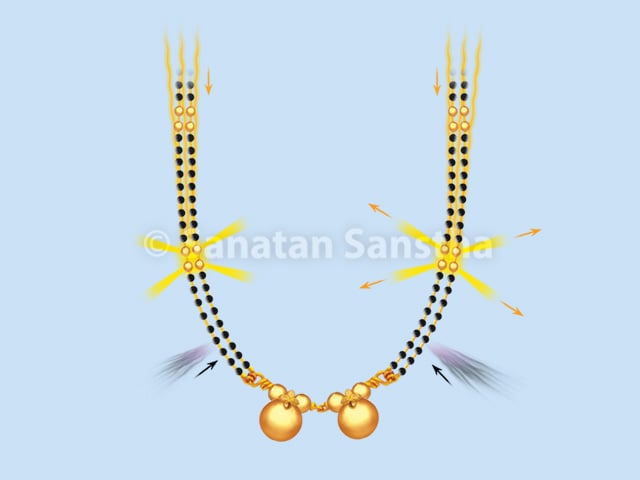 2. Arrangement of the mangalsutra (Mangalsutra with black beads and small gold cups)

A. What should be the length of a mangalsutra ?

B. Cups of the mangalsutra

C. Two strings of black beads in the mangalsutra

D. Benefit of braiding the thread of the mangalsutra into a gold wire

‘The mangalsutra is braided in a gold chain in a continuous fashion. The gold eliminates the distressing vibrations of the universe with its own awakened radiant energy.

E. The arrangement of the mangalsutra is associated with the woman’s procreation energy

A cup and the two beads connected by the flower with four petals make a triangular formation. Since this formation is associated with the woman’s procreation energy, it keeps her sense of procreation constantly awakened; which is why, the basic attitude of the woman ‘to love’ is maintained.

G. The oval shape created in the middle of the circular

formation of mangalsutra performs the task of awakening of the Sushumnanadi

The oval shape created in the middle of the circular formation of the mangalsutra helps the woman imbibe the Divine vibrations at the unmanifest level, because the oval shape is associated with the unmanifest kriya-shakti (Energy of action) of Shrivishṇu. This shape performs the task of awakening the Sushumnanaḍi (The central channel of the spiritual energy flow system), it helps the prakruti in the form of woman to unite with Deity Shiva in the form of man, and thus aids in the woman’s early liberation from Maya.’

A. When a mangalsutra breaks, the black beads become heavy due to the weight of the distressing energy.

4. Why should widows not wear a mangalsutra ?

‘The mangalsutra is willingly placed around the neck of the woman by the husband with his hands. Hence, it imbibes the waves associated with husband’s desire. If the wife wears a mangalsutra as fashion even after the death of her husband, the husband’s subtle-body can get entrapped in the earth’s sphere due to these vibrations. Whenever the woman looks at the mangalsutra, she remembers her husband, and the husband has to come back to the earth. This obstructs the momentum of his subtle-body’s journey to higher regions. Rationalist women in the present times wear a mangalsutra even after their husband’s demise, challenging the very underlying science. This act harms the deceased husband as well as the woman at the spiritual level. Hence, for our own benefit, we should refrain from unnecessary use of intellect, and religiously abide by Dharma

5. Why is there no tradition for men to wear a mangalsutra ?

Since a woman is more sensitive than a man, black beads are used in a mangalsutra, so that she is not afflicted by the evil-eye. The mangalsutra in itself is an ornament of wifehood, and symbolises the bond of marriage. A male temperament is naturally tougher and conducive to leadership. Since a male is considered a form of Deity Shiva, the doer, he is naturally able to operate in a pre-planned manner, and hence, within his specific limitations. Thus, he is given a position of a father in ‘Karmakand’. He is not bound by an arrangement such as the mangalsutra, since basically, the position of a father means less possibility of committing adultery.

Reducing one’s ‘I’-ness, developing an attitude of obedience and thus creating a patriarchal system means performing the duty of a patriarch according to Dharma. This increases the feeling of unity within the family, and the entire family keeps away from such indulgence. The janeu (Sacred thread) worn by a man represents Tejtattva and reminds him about his patriarchal duties.

Reference : Sanatan’s Granth, ‘Science underlying the wearing of Ornaments (From necklace to the waistband)’