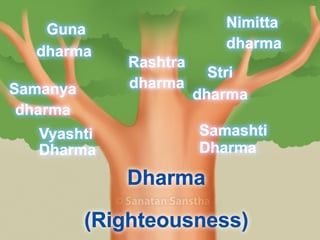 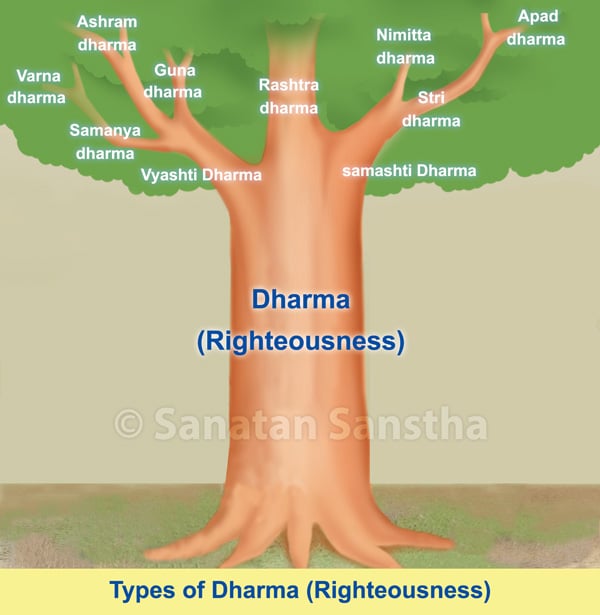 Life without Dharma is akin to life without oxygen, that in other words is being as good as dead. Dharma is the soul of an individual. Reaching a stage where the eternity of the soul is understood is itself reaching a stage of attaining Moksha (Final Liberation). This article elaborates on different types of Dharma in various contexts such as depending upon class one belongs to, stages of life, role being played, circumstances etc.

Meaning : Samanyadharma includes mercy, truth, control over the mind, purity, offerings, control over the senses, non-violence, service unto the Guru, pilgrimage, compassion, honesty, absence of greed, honouring Deities and Brahmans and not criticising anyone.

Brahman, Kshatriya, Vaishya and Shudra are the four classes. Dharma applicable to the respective class is known Varnadharma.

Brahmacharyashram, Gruhasthashram, Vanaprasthashram and Sanyasashram are the four ashrams. This is limited to a particular stage of life

This refers to the duty to be performed in accordance with the role one is playing or the position one is occupying, for example, the duty of a King is to nurture his subjects. The attributes of the five cosmic elements are also called gunadharma, for example, the gunadharma of water is coolness, liquidity, to flow from high to low area etc. These attributes are understood as science in modern language; however, in the Bharatiya culture, it is referred to as ‘swabhav’. Here ‘swa’ should be considered as God. The way God manifests from an object is the swabhav of that object

This is the variation in behaviour that one has to make according to the prevailing circumstances, for example, during Navaratra a lamp is lit uninterruptedly. If for some reason the lamp goes off, then it is lit again and as an atonement one has to chant the name of the Deity 108 times.

This is expressed by the quote ‘आपदि कर्तव्यो धर्मः ।’ which means, the code of Dharma that should be followed during a calamity. In the system of the four classes, each class is assigned duties as per Dharma. Often due to unforeseen reasons such as Divine and earthly (spiritual or physical) crises, revolutions, famine, forcible migration etc., there is a sudden collapse in the system of classes, and it becomes impossible for people to perform karma prescribed according to their class. This hampers the means of their livelihood. Under such circumstances, according to an arrangement created by the Scriptures as an exception, an individual belonging to one class is allowed to accept the Dharma of the other classes. This arrangement is called Dharma in times of adversity. However, the Scriptures also preach that once the crisis is over or after social life is restored to normalcy, one should undertake penance and start practising one’s own Dharma all over again.

A. Types of adverse times

Adverse times are of 3 types.

B. Importance of understanding the nature of Apaddharma !

Apaddharma is formed by a combination of Dharma and morality. It shows signs of Vedic Dharma and hence, is called as Apaddharma.

7. Stridharma (Dharma of a woman)

Dharma is symptomatic in a dual way – active in worldly life and cessation of participation in worldly affairs. Here both vyashti and samashti conditions are given due consideration. This consideration in itself is the relativity. Non-violence can be the Dharma of vyashti since staying away from day-to-day activities is a major part of spiritual practice therein. But this is not the case with a Nation. In this case, it is all about activities for the sake of the society. In such a case, presence of Brahmatej (Radiance of knowledge) and Kshatratej are required. As a result, in these activities the non-violence that destroys the Truth is avoided, meaning, in that situation the violence itself becomes non-violence (Dharma). Punishing an unrighteous person does not amount to violence. The meaning of violence should not be taken as inflicting unhappiness; it should be taken as causing harm. When punishing an evildoer, the aim is not to make him unhappy; rather to alleviate the harm caused to him and also to allow him to attain a higher quality of happiness acquired by following Dharma.

The spiritual practice of putting in efforts for the elevation of the Nation is Rashtradharma.