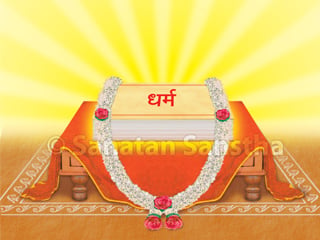 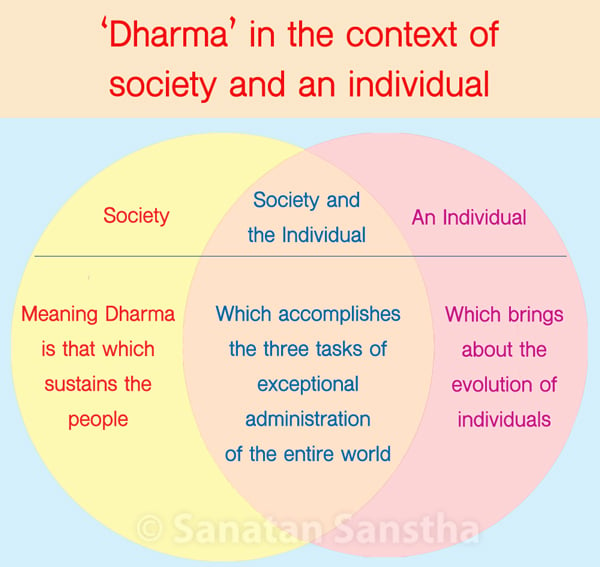 Life without Dharma is akin to life without oxygen, that in other words is being as good as dead. Dharma is the soul of an individual. If everyone complies with the teachings of Dharma, nature will become favourable to human happiness. This article explains origin, definition and meaning of Dharma, creation of Dharma and importance of abiding by Dharma.

A. Dharma is not religion 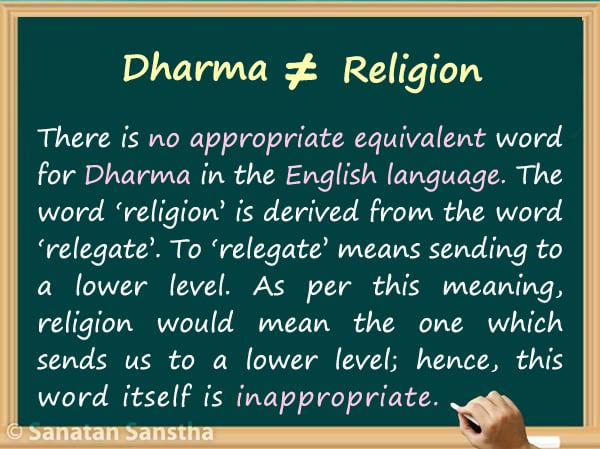 There is no appropriate equivalent word for Dharma in the English language. The word ‘religion’ is derived from the word ‘relegate’. To ‘relegate’ means sending to a lower level. As per this meaning, religion would mean the one which sends us to a lower level; hence, this word itself is inappropriate. On the contrary, Dharma is one which elevates us to a higher plane. The word ‘Dharma’ is used with different meanings in different Holy texts. In order to understand the scope of the word, some of its important origins, definitions and meanings are given here. Till we attain the state of Turyavastha, we will not understand the true meaning of Dharma. Turyavastha is the fourth state beyond the three states of wakefulness, deep sleep and dream, that is, the state of meditation.

B. In the context of society

C. In the context of an individual

D. In relation to both the society and the individual

E. Difference between Dharma and adharma

‘सनातनो नित्यनूतनः । ’ means that which is eternal, has no beginning and yet is always new, meaning, it never ages, is called Sanatan. Only that which repeatedly manifests in a new form will last, for example, one should expect a tree to die when no new shoots spring from it. In the Bhavarthadipika (Dnyaneshwari 1.71), Saint Dnyaneshwar has said that each time one contemplates (on the Shrimadbhagwadgita), the Principle of the Holy Shrimadbhagwadgita appears to be new. (In other words, each time, one understands a different meaning.) ‘Sa’ in the word ‘Sanatan’ is the seed of the Sun Principle which symbolises the Absolute Fire Principle.

‘San’ (सन्) from the word ‘Sanatan’ means the present and ‘atan’ (अतन) means that which has no body, meaning that which is beyond the realm of time. This itself is termed as ‘Brahman’.

B. Vedadharma or Vedic Dharma

‘Vid’ in Sanskrut means to understand. The word ‘Ved’ is derived from the verb ‘vid’. Ved means knowledge, the subject matter of knowledge or the means to acquire it. Knowledge, in this context, refers to the knowledge of the soul, the realisation of God or spiritual experiences. 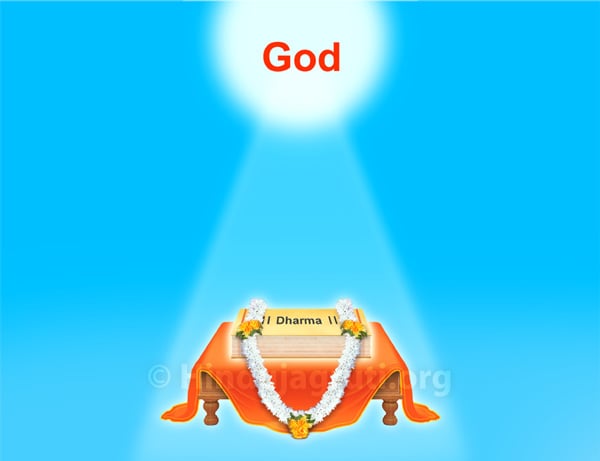 God created the universe in times immemorial. At the same time He created Dharma.

Meaning : The original Dharma was created from Supreme God. All other sects were created later.

A. Sweetness is the quality of sugar. That which possesses the quality of sweetness is the Dharma and its Dharmi are inseparable. They are merged into one another. The relationship between God and Dharma is akin to that between sugar and its sweetness, which are inseparable. God is the Dharmi. His quality is Dharma. A quote says ‘धर्मो नारायण स्मृतः ।’, meaning Dharma is Narayan (God). Dharma of God cannot have different identities; hence, there is only one Dharma and that is the Sanatan Dharma. For this reason, history of Dharma is effectively the history of the search for God.

A. Just as there is no life without respiration, so also life without Dharma is not a worthy life, as it amounts to an existence like animals.

Meaning : When compared with all knowledge, good conduct is considered to be superior; because Dharma is based on achars (Conduct). When man abides by achardharma, his life is prolonged.

Meaning : Dharma bestows wealth as well as happiness. In fact, everything can be acquired through Dharma. This entire universe sustains itself on the foundation of Dharma.

Meaning : (Sage Vyas says) With my arms raised, I am lamenting, yet no one listens to me. (O human beings) Dharma accomplishes both, earning of wealth and fulfilling of desires. Then, why do you not abide by Dharma ?

Meaning : Those who do not follow Dharma are destroyed, and those following it meticulously are protected by Dharma (that is, God).

Meaning : Even if Dharma is followed to a small extent, it protects from larger danger.

Meaning : The world remains safe if everyone abides by Dharma; that is why Dharma is said to be the main supporter of earth. There is nothing more ethical than Dharma in this world. Hence, I pay obeisance to that Dharma.

Meaning : Unrighteousness is the root cause of all diseases. There are three categories of diseases, namely Adhibhoutik, Adhidaivik and Adhytmik. Adhibhoutik diseases arise from physical causes such as earthquake, famine etc. Adhidaivik diseases occur due to malefic planets, curses of Saints and Sages and wrath of Deities etc.

Adhyatmik diseases are distress due to negative energies such as ghosts, destiny etc. (According one school of thought, the aforementioned Adhyatmik distress is also included under Adhidaivik distress. Adhyatmik distress means physical and psychological distress occurring due to imbalance of bodily humours namely vata [Air], pitta [Bile] and kapha [Phlegm].)

Meaning : Dharma alone is the companion of man in other worlds, that is, in life after death.

Meaning : Wherever there is Dharma, there is victory.

N. If everyone complies with the teachings of Dharma, nature will become favourable to human happiness. Saint Dnyaneshwar has said precisely the same thing in one of His works, that one gets results as per one’s desires and that is applicable not merely to human beings, but to the entire animal kingdom and immovable nature; for, depending on our karma, we can even get the birth of an unmoving living being. Only when human beings progress will the moving and unmoving components of nature become happy, and should they fail to progress, then they will have to face the demerit of making this all – encompassing environment unhappy.