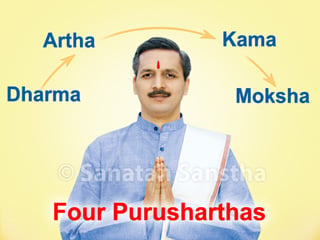 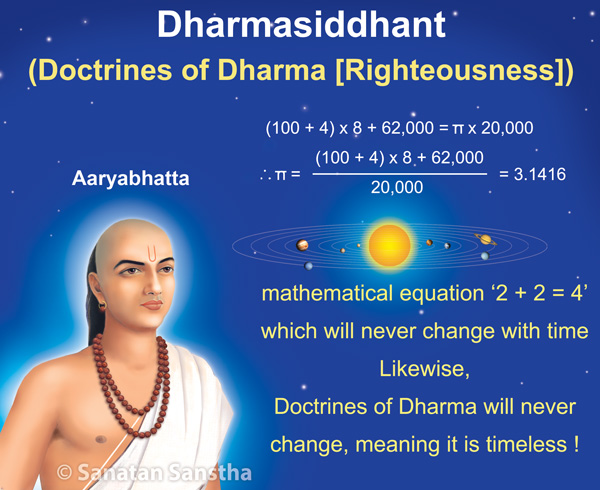 Dharma has doctrines but no rules. A rule can have exceptions, a doctrine cannot. A doctrine does not change, meaning it is timeless. Likewise, since God has not changed since times immemorial, the doctrines of seeking God too have remained unchanged. Since these doctrines or principles of Hinduism do not change, Dharma, too, does not change. This is akin to the mathematical equation ‘2 + 2 = 4’, which will never change with time. With the passage of time, due to historical events (internal as well as external), the details of following Dharma do change; but society should have the innate understanding that, sooner or later, the changed (deliberately altered) details shall unite with the doctrine or principles of Hinduism.

Dharma believes in the existence of God. Creation, Sustenance and Dissolution of the universe are all under God’s control.

2. Multitude of Deities and numerous paths of spiritual practice 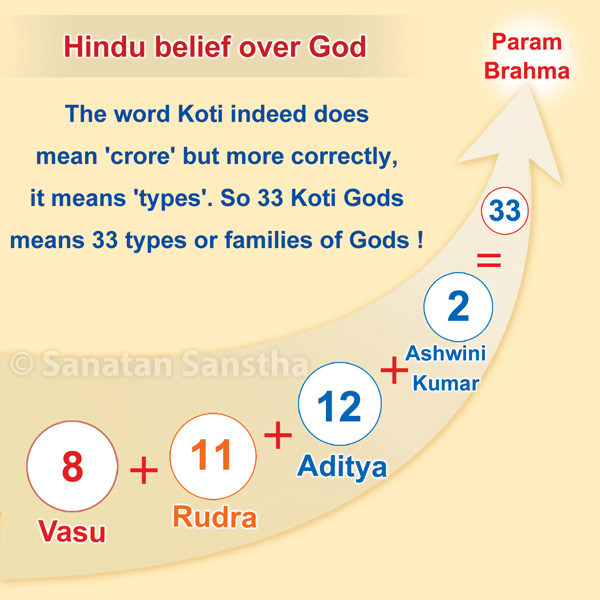 Often in Hindu Dharma, there is mention of 33 crore Deities. Hindu Dharma mentions a whole lot of paths of spiritual practice. Really speaking, there is only one God. Therefore, many may wonder, what is the necessity of 33 crore Deities for devotion unto Him or for that matter, what is the necessity of so many paths of spiritual practice for reaching Him.

God manifests in various forms for accomplishing different missions. These forms of God are known as Deities. Besides, a dictum in Spirituality says ‘There are as many temperaments as there are people and corresponding number of paths of sadhana (Spiritual practice)’. The population of earth is over 60 billion. No two individuals amongst these 60 billion resemble each other. Each has a different body, mind, likes – dislikes, virtues and personality defects, hopes and ambitions, desires etc. Each has a different intellect, sanchit and destiny; proportion of the three components, namely Sattva, Raja and Tama in them is also different. Therefore, worship of which Deity will help an individual reach God will also vary. Moreover, God exists not just in living beings but in inanimate things too; hence, there are a number of Deities in Dharma.

Vedic Dharma did not have the concept of Idol worship. Indra, Varun, Som were the Deities in control of the actual events taking place in Nature. The Vedas have eulogised them and have also described them in the human form. In the Upanishads, the concept of Parabrahman (Supreme God) gained ground and contemplation on Him became a form of ritualistic worship. Later worship of Deities in various forms started. It is difficult for an ordinary human to worship God in the nirgun (Non-materialized) form; that is why, people worshipping the sagun (Materialised) form felt the need for an Idol and they took to the Path of Idol worship.

4. The concept of debts 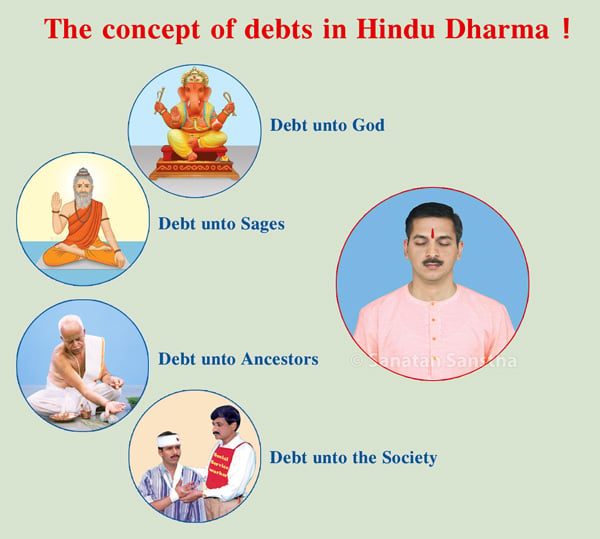 A. The four debts

B. Repaying of debts (Panchamahayadnya) 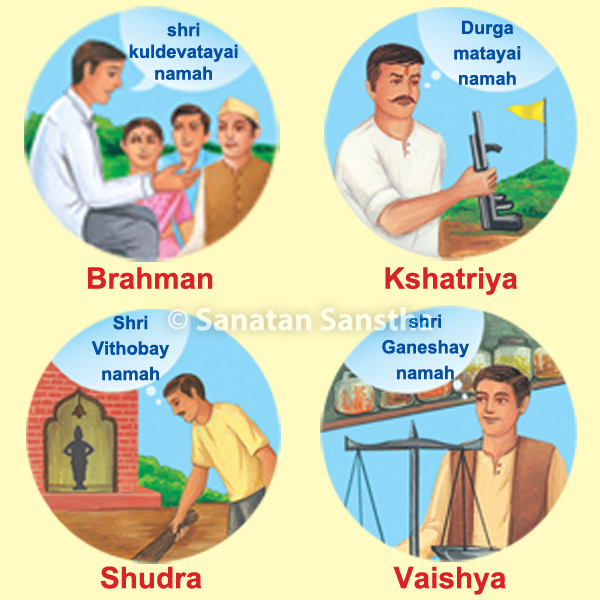 There are four ashrams, namely Brahmacharyashram, Gruhasthashram, Vanaprasthashram and Sanyasashram. The four classes are – Brahman, Kshatriya (Warrior), Vaishya (Trader) and Shudra. The aim of the system of stages of life is to bring about progress in personal life and that of system of classes is to bring about the progress of society. Together, this concept is known as Varnashramkalpana.

The word ‘purush’ is derived from ‘puras’(meaning, one marching forward). Purush is one capable of attaining pursuits of life. Hence, the word ‘purush’ indicates the quality. In the Vedicgrammar, the word ‘purush’ is used in the first, second and third person. Striving earnestly to accomplish the targets of Dharma is known as the Purusharthas. The Scriptures prescribe four Purusharthas – Dharma (Righteous conduct), Artha, Kama and Moksha (Final Liberation). Initially, there were only the first three Purusharthas and they were called trivarga (or three parts). During the period of the Upanishads, the fourfold concept of Purusharthas was firmly established with Moksha acquiring the fourth position.

A. Artha and Kama are also as important as Dharma

Man and woman get attracted to each other because of Kama and this leads to procreation. Sexual intercourse is said to be akin to a ritual in a sacrificial fire in which the man deposits his sperm into the symbolic fire in the form of a woman.

In the Mahabharat, the glory of Dharma, Artha and Kama is narrated in several instances and while reading the epic, it becomes clear that Bharatiya philosophers considered all the three Purusharthas to be equally important. Time and again, various philosophers have stated that, although Dharma is undoubtedly extremely important, if one neglects the other two Purusharthas of Artha and Kama by concentrating only on Dharma, then self – destruction will be imminent.

B. Yuga (Eras) and Purushartha

The table ahead indicates which Purushartha was predominant in which era

7. Restraints (penalty) for adharmacharanis and non-violence

A. If unrighteous conduct is not curbed then, we have to endure the demerits of an individual’s unrighteous behaviour

B. Punishing an unrighteous person does not amount to violence !

As far as possible, this restraint should be imposed by conciliation. However, if this is not possible, then the doer should be punished. Punishing an unrighteous person does not amount to violence. The meaning of violence should not be taken as inflicting unhappiness; it should be taken as causing harm. When punishing an evildoer, the aim is not to make him unhappy; rather to alleviate the harm caused to him and also to allow him to attain a higher quality of happiness acquired by following Dharma. If this concept of non-violence is clearly understood, then there will be no confusion about violence and non-violence.

Hindus believe that, based on karma in previous births, a soul takes rebirth in different species. The doctrine of karma says that one has to face the consequences of merits and demerits done in this birth, in future births. Similarly, one experiences happiness and unhappiness in this birth based on the sanchit created in past births. One cannot escape the outcome of a karma. All the sects in Hindu Dharma have accepted the concept of the soul going through the cycles of birth and death. Liberation from these cycles of birth and death is itself Moksha. Man can attain Moksha by following Karmayoga (Path of Action), Dnyanyoga (Path of Knowledge) or Bhaktiyoga (Path of Devotion).

An individual can merge with the Supreme God completely even when alive in this world. This has been exemplified by numerous highly evolved Sages, Ascetics and Saints in the past and even today.