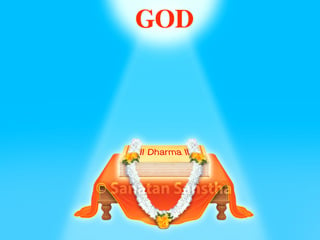 The objective of an ideal social structure is imbibing of virtues like loyalty unto Dharma and Nation, being dutiful, morality, virtuous conduct etc., by the entire society. Dharma is an important component for attaining this objective; for, it is only on the support of Dharma that human beings flourish, meaning, upliftment of their materialistic and spiritual life takes place and they attain Moksha (Final Liberation). This article explains the reasons underlying decline of Dharma in present times and stresses the need for reinstatement of Dharma.

1. Reason underlying the decline of Dharma

When these four limbs of Dharma are safe, meaning, society abides by them, Satyayug dwells in the society in totality. Dharma endowed with four limbs is stable like a table with four legs. If one limb of Dharma becomes weak, then its state becomes like that of a three legged table. If only two limbs remain, then it becomes shaky. If only one limb of Dharma remains, then it becomes unstable. This can be experienced in today’s Kaliyug (Era of strife).

In the text Shankarbhashya, Jagadguru Shri Shankaracharya has said, ‘Dharma of Kshatriyas depends on Brahmans, that of Vaishyas on Kshatriyas, and that of Shudras on Vaishyas. If Brahmans maintain a conduct as per Dharma, then the Dharma niti of Kshatriyas is well maintained. Consequently, the state of Vaishyas and thereby the niti (Morality) of Shudras remains in good stead.

2. The reason for Incarnation of God 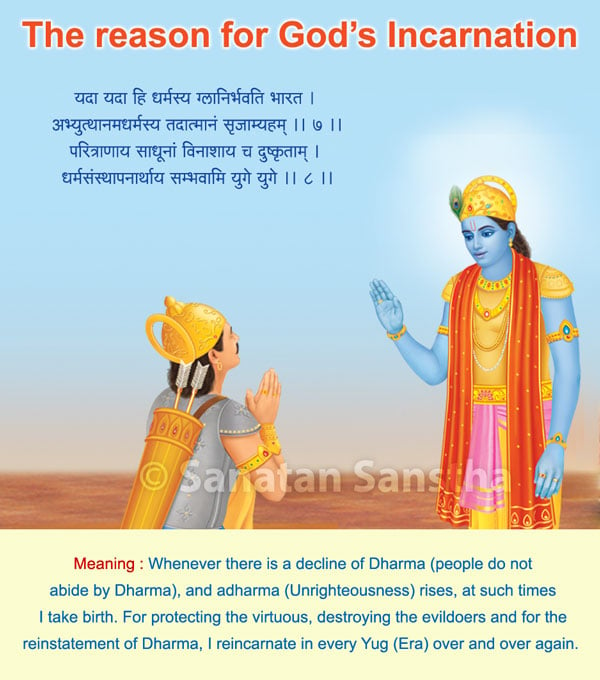 In the following two shlokas of the fourth chapter of Shrimadbhagwadgita, Shrikrushṇa has explained what Incarnation God assumes, when and why –

Meaning : Whenever there is a decline of Dharma (people do not abide by Dharma), and adharma (Unrighteousness) rises, at such times I take birth. For protecting the virtuous, destroying the evildoers and for the reinstatement of Dharma, I reincarnate in every Yug (Era) over and over again.

Implied meaning : In a state of decline of Dharma, since the Sanatan Dharma is Apourusheya, meaning it is a creation of the Supreme God, He Himself takes up the job of reinstating Dharma. To accomplish this mission, He incarnates in a sagun (Materialised) form. Again, at the end of every Yug, Dharma reaches a state of decline.

3. The real meaning of improvement in Dharma is reinstatement of Dharma

Some intellectuals who label themselves as thinkers have begun to claim that the way our Dharma has good qualities, it also has some defects and unless these defects are corrected, we will not be reformers in the true sense and therefore, will not be happy. This comment is nothing but a vivid indicator of stupidity of these self-proclaimed intellectuals. When the definition itself proclaims, ‘Dharma is one that brings about worldly as well as spiritual evolution of mankind and thereby develops a suitable sattvik (Sattva-predominant) attitude of human mind in preparation to the path of seeking God ’, where is the scope for any defect in Dharma ? Whenever Dharma reaches a state of decline, that is, defects develop because of a non-understanding of the essence of Dharma in totality and it starts adversely affecting the followers of Dharma, God incarnates to protect these followers of Dharma and to set right its distorted path. Setting right the distorted path of Dharma itself can be called ‘correction’ in Dharma.