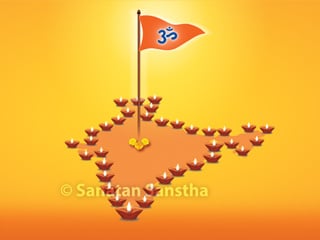 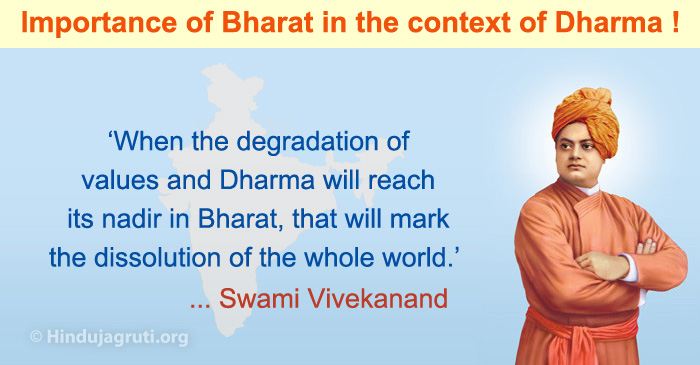 Life without Dharma is akin to life without oxygen, that in other words is being as good as dead. Dharma is the soul of an individual. Reaching a stage where the eternity of the soul is understood is itself reaching a stage of attaining Moksha (Final Liberation). When an individual abides by Dharma during the course of his life, he evolves spiritually. He attains positive momentum even in life after death, meaning, he attains a place in superior region. This article stresses importance of India (Bharat) in the context of Dharma.

1. With the passage of time, the number of places with a foundation of Dharma kept reducing and now, Dharma exists only in Bharat

The history of our ancestors is recorded in Holy texts such as the Ramayan, Mahabharat, Shrimadbhagwat, Purans etc. From these texts, we can realise that only seekers have the right to rule this earth surrounded by the oceans. At the end of the Satyayug, when there was a decline in So-ham bhav, one of the four aspects of Dharma was destroyed and proportionately, conduct as per Dharma in one-fourth of the earth region vanished and Dharma remained in only three-fourths of the region. The Tretayug manifested at that time. Again, when one more aspect weakened, the Dwaparyug came into existence and only a few individuals on half the earth retained conduct as per Dharma. At the culmination of the Dwaparyuga, as three aspects of Dharma weakened, people on only one-fourth of the earth retained conduct as per Dharma. It was then that the Kaliyug (Era of strife) commenced. From the Pandav lineage, Arjun’s grandson Parikshit became the first King in the Kaliyug. Even in those times of Kaliyuga, Brahmans had the capabilities of performing sarpayadnya. Later, the Sattva component began to decline everywhere and only Bharat remained a land of spiritual practice and therefore, became a meritorious land. This is precisely why the Holy text Shri Gurucharitra says that ‘Bharat is the most meritorious land in the five continents.’

2. Glory of Bharat as sung by the Holy Scriptures and the Saints

Meaning : A combination of 18 Purans, the Smrutis and all the Vedas with their subdivisions on one side and just Bharat on the other side (This is the level of significance of Bharat).

B. Though our ancestral Kings ruled the entire earth, their capital was in the present day Bharat and it was called Indraprastha. Hence, if happiness and peace should reign in the world, then the beginning should be from Bharat because, at present, only Bharat remains as the land of Dharma. Swami Vivekanand has said, ‘When the degradation of values and Dharma will reach its nadir in Bharat, that will mark the dissolution of the whole world.’

Even if all parts of the body get emaciated due to illness, so long as the heart continues to beat, one can still survive. Today, the state of the entire world resembles such an ailing body. This, in other words, is deterioration of Dharma. Today’s Bharat represents the heart of the body of the universe and its fading heartbeat is symbolic of the Saints and their close disciples. Thus, the cardiac ailments of this universal body will get cured and the health of the universe will improve only by following the norms of Dharma preached by the devout followers and by enhancing our Sattva component.

The word Bharat can be split into ‘Bha+ rat’. ‘Bha’ means soul and ‘rat’ means engrossed. So, ‘Bharat’ means ‘where people are engrossed in atma-bhav’.

3. Praises showered by westerners on Bharat

A. At this supremely dangerous moment in history, the only way of salvation for mankind is the Indian way.

I want to take up three points – My first point is that India occupies a key position in the world, and has always done so, ever since civilisation first began to fan out East and West, from its original birth place in what is now Iraq. My second point is that India is an epitome of the present day world. Some of the principal problems confronting the whole human race today are conspicuously present inside India’s frontiers, and are being wrestled with today, as Indian national problems, by the people of India and by the Indian Government. My third point is that, in India, there is an attitude towards life, and an approach to the handling of human affairs, that answers to the needs of the present situation and this, not only inside India but in the world as a whole.

If India were ever to fail to live up to this Indian ideal, which is the finest, and therefore, the most exacting legacy in your Indian heritage, it would be a poor lookout for mankind as a whole. So a great spiritual responsibility rests on India.’ – Renowned Historian Mr. Arnold Tonybee

B. ‘If I were to look over the whole world to find out a country most richly endowed with all the wealth, power and beauty that nature can bestow – in some part, a very paradise on earth – I should point to India. If I were asked who are the people who have completely developed some of the best gifts from God, who, after doing lot of deep thinking, have found such fantastic solutions to the most difficult problems in life that they will attract even those studying Pluto and Cant’s teachings, my answer would be India. We European people imitate the thinking styles of Greeks, Romans and Jews in life. If someone asks me literature from which country should one fall back on in order to make this life more successful, truly humanitarian and everlasting, I would still answer as India.’

– Renowned Scholar, Professor Max Muller (An extract from the letter sent by him to Queen Victoria in the year 1858.)