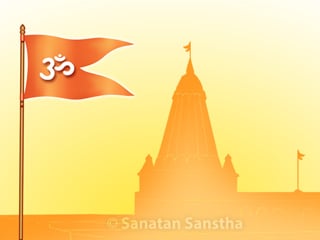 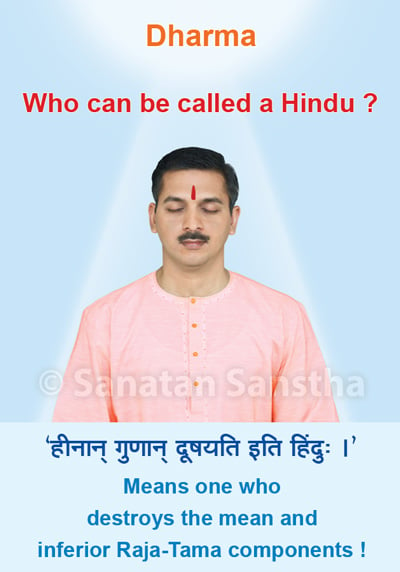 Life without Dharma is akin to life without oxygen, that in other words is being as good as dead. Radiance of Dharma is termed as Aditej (Primordial radiance). The word Adi means that which existed before every component or incident. This concept is eternal and therefore, it is Brahman (Absolute God Principle). The concept of Dharma remains steady even after the processes of Creation, Sustenance and Dissolution. Since the perceptions of Brahman are steady, it has no fear of Dissolution. Hence, Hindu Dharma is without a beginning and has no end too; meaning, it is full of knowledge.

The Holy text Merutantra defines the origin of the word ‘Hindu’ (हिंदु) as ‘हीनान् गुणान् दूषयति इति हिंदुः ।’ means that which destroys the mean and inferior Raja-Tama components. One who rejects the inferior Raja-Tama components and the resultant physical, verbal and mental inferior activities, and one who is engrossed in the Sattva predominant component and therefore, considers devotion unto God as the essence of life and thereby seeks God and further, strictly adheres to Karmayoga (Path of Action) so as to guide the society, is to be termed ‘Hindu’. Such is the expanded origin of the word Hindu. Thus, the term Hindu is an attitude (Sattva predominant). It means a seeker.

A. The sole eternal goal of Spirituality as perceived by Hindu Dharma is to display the God Principle in human beings, rather bring about the manifestation of God in them. Whether it is the struggle to restructure the Bharatiya economy or the great struggles for freedom of enslaved Bharatiyas, Bharatiya Spirituality strives to achieve its eternal goal in both these cases.

B. A Dharma that provides education on loving everyone and provides extreme freedom of thought : Our Hindu Dharma provides education on the art of loving others. Many believe that loving others is difficult or rather, impossible. Sadly, there is no option but to say that these people are strangers to knowledge about our Dharma. When a person who is being loved is dissatisfied, then even the person who loves becomes unhappy, since he considers the shortcomings of his ability to love as the cause of other persons’ sorrow. A very good example of this statement is quoted from the incident of a washer man from the Kingdom of Shriram.

In the Kingdom of Shriram, a washerman was not stopped from expressing his thoughts and delivering a speech against the virtuous and Ascetic-like wife of the King who Himself was revered by His subjects, other Kings and Dharma. Though Shriram was fully aware that the behaviour of that washerman was unjust, He was of the view that, by punishing the washerman, his mouth could be shut, not his thoughts, for they would find their way out through a thousand other mouths. All efforts to counter them would result in anarchy in the Kingdom. Therefore, changing the thoughts of a society is possible only through practical solutions and not by forceful punishment. Freedom of thought and speech is an utmost necessity. In reality, it is the pride of an independent Nation and Bharatiya culture has always honoured it.

C. Hindu Dharma is so flexible that such extreme flexibility will not be found in any other religion. Hence, all other sects are derivatives and sub-derivatives of our Dharma.

A. The one who accepts the Vedas, Vedangs and the Puraṇs and their corresponding sects and who is born in a traditional Hindu family is a Hindu.

B. The one who wholeheartedly accepts the definition above as the authority is also called a diksha-hindu, meaning ‘Hindu by initiation’.

C. One who does not believe in the Vedas, Vedangs and the Puraṇs and their corresponding sects, but who is born to Hindu parents is a ‘Janamartha ’, meaning a Hindu by birth. Vedas, Vedangs and the Puraṇas well as their corresponding sects are undoubtedly superior; but in their absence, I consider a Hindu by initiation to be superior from the point of view of worship. However, in matters of marriage, always a Hindu by birth should be chosen.