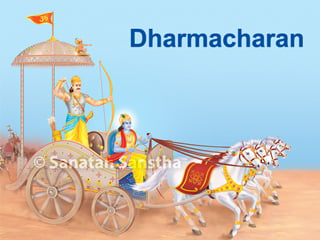 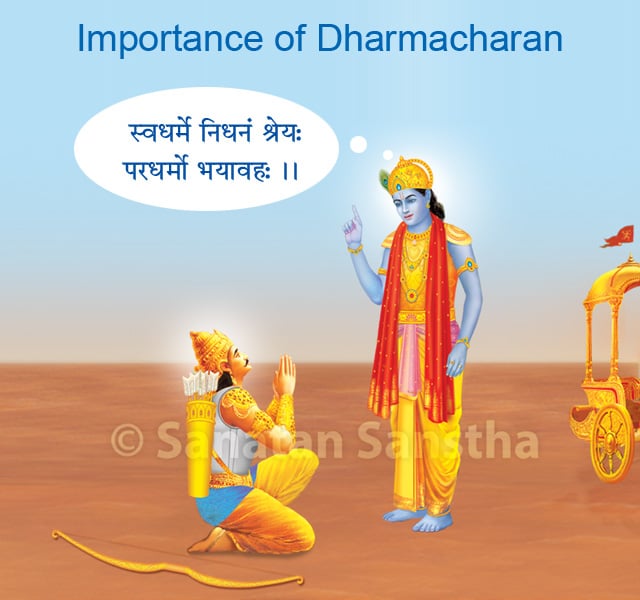 Life without Dharma is akin to life without oxygen, that in other words is being as good as dead. Dharma is the soul of an individual. Reaching a stage where the eternity of the soul is understood is itself reaching a stage of attaining Moksha (Final Liberation). When an individual performs Dharmacharan and start living Dharma during the course of his life, he evolves spiritually. He attains positive momentum even in life after death, meaning, he attains a place in superior region.

A. It is the conduct of the four classes as defined by their respective class and in tandem with the stages of life. Shrikrushṇa says –

Implied meaning : When Shrikrushna preached this to Arjun in the Dwaparyuga, only Hindu Dharma prevailed everywhere. Therefore, then it did not mean not to convert to another religious order as per the present day connotation. What it meant was that each one should follow the Dharma pertaining to his varṇa (Class).

B. In His Holy text ‘Dasbodha’, Saint Samarth Ramdas Swami has said, remaining centred in our own – self is Dharma amongst Dharmas.

C. In the state of swadharma (One’s own Dharma) as mentioned by me in the Vedas, there is detachment from sense objects which leads the beings to Moksha. – Ekanathi Bhagwat, Adhyaya 21, Verse 210

Samarth Ramdas Swami in the Holy text Dasbodh and Shri Ekakarteeka (in Eknathi Bhagwat) have said that conduct according to Dharma is the definite and shortest way to self-realisation.

Meaning : Conduct according to Dharma even at the cost of risking one’s own life is more commendable.

2. On what factors does Dharmacharan depend ?

A. The social setup

Even the authors of Mahabharat have agreed that Moksha should be man’s ultimate goal. However, since Moksha is an extremely evolved state, it is possible only in an advanced and mature state of the society. Doctrines by Bharatiya philosophers proclaim that this is possible only in a society in which the conduct of people is clean and their thoughts are evolved and pure, where the administrative system is excellent, where social transactions occur smoothly; the society is well educated, valiant and capable of protecting itself from foreign invasions – it is possible to undertake spiritual practice to attain Moksha and bear its consequences in such a society.

The points here will illustrate the importance of Dharmapramukh.

Mere preaching does not change a person. To change him, it is to be backed either by the incentive of reward or the fear of punishment.

Since the rule of Dharma cannot be established without punishment and rewards, the following three constituents of Dharma are essential.

the meaning of Dharma is Dharmacharan in true sense !

6. The changing face of Dharmacharan

A. Changes take place in the specifics of Dharmacharan and not in the doctrines of Dharma !

There has been no change in Dharma since time immemorial, as the doctrine of Dharma, meaning that for God-realisation has remained the same. Just as the equation ‘2 + 2 = 4’ does not change with changing times, similarly there can be no change in Dharma. Doctrines of Dharma are the same and permanent while Dharmacharan is bound by place and time. This part undergoes change. In order for the changes to be appropriate, guidance is given by Dharmashastras.