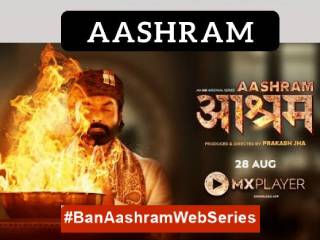 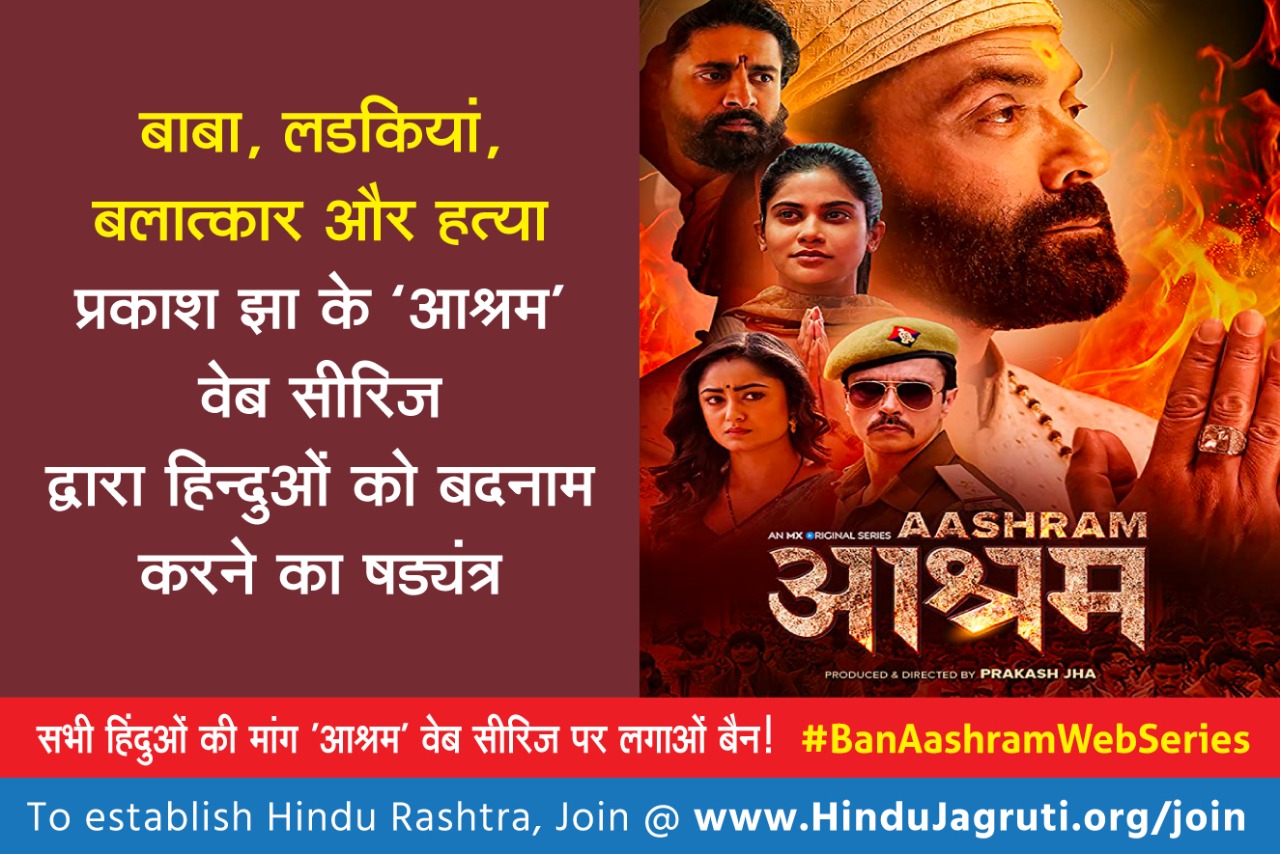 MXPlayer, the video streaming and player app owned by Times Internet (the web arm of the Times Group), has recently released a web series called Aashram. According to the makers, the series directed by Prakash Jha ‘is an attempt to unmask the fake godmen who prey upon gullible people’. They say this very clearly in a ‘disclaimer’ where they claim to hold ‘all religions and traditions of the land in high regard’. But as we will see, this disclaimer is nothing but an attempt to deflect any potential legal action, considering the series only seems to target Hindu beliefs and systems.

9 episodes of the web series Aashram were released for free on the MXPlayer app and website on 28th August, 2020. Bobby Deol, essays the role of Baba Nirala Kashipurwala, a rowdy turned Godman. He runs a sprawling empire of an Ashram with thousands of inmates, hospitals, schools, colleges, you name it. Along with this he has a dark side with his ashram embroiled in rape, murder, extortion, drug dealing, you name it. The makers of Aashram have spared no evil when crafting the character of Baba Nirala. 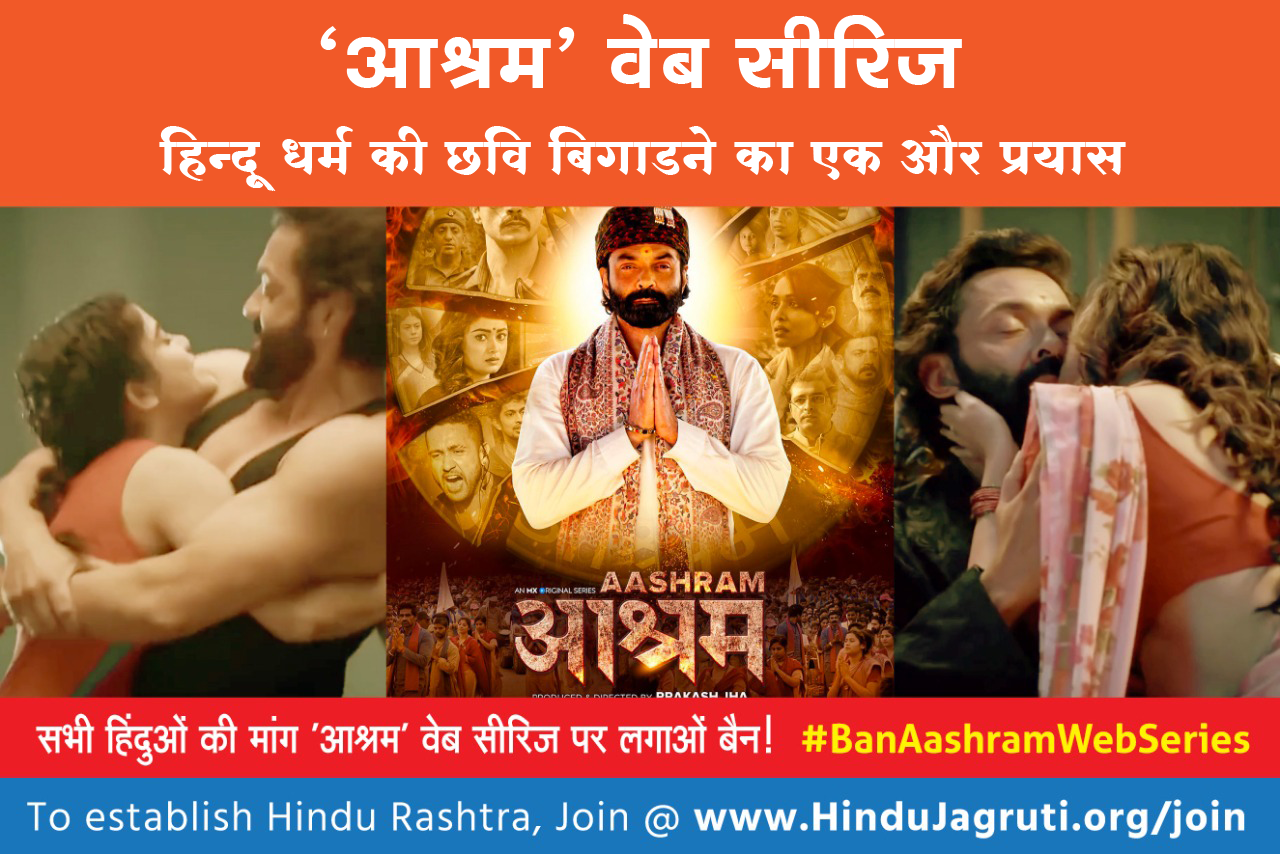 We have a few questions for the makers of Aashram.

If you really respect all religious beliefs and ‘genuine’ Saints of this country, why did you choose a name like Aashram for the series? What you have tried to show are characteristics of a cult. There are cults in Christianity and Islam too. Why not go the secular route and name your series ‘Cult’? Why choose Aashram?

For our readers, the word Aashram is an integral part of Sanatan Hindu Dharma. For example, the four stages of life are known as Brahmacharyashram, Grihasthashram, Sanyasashram and Vanaprasthashram. The web series has been deliberately named as Aashram to create an impression that the word Ashram is associated with something bad, something filthy.

On the same note, if you really respect all religious beliefs why are your episode names directly lifted from Hindu beliefs

Pran Pratistha – This episode shows the good and bad sides of baba Nirala and his followers. (Pran Pratistha is a sacred ritual that invokes the principle of a Specific God/Goddess before beginning any ritual. The makers of Aashram have ridiculed the sacred nature of the term)

Grih Pravesh – This episode shows how people end up living in the Aashram. (Grih Pravesh, is not just the literal meaning of the word. It is a set of sacred rituals that are performed to purify the premises, seek forgiveness from nature for having to give it some hardship to have built the premises and finally propitiate God to ensure that the premises is beneficial to those dwelling there. The makers again have taken the term on its face value alone) 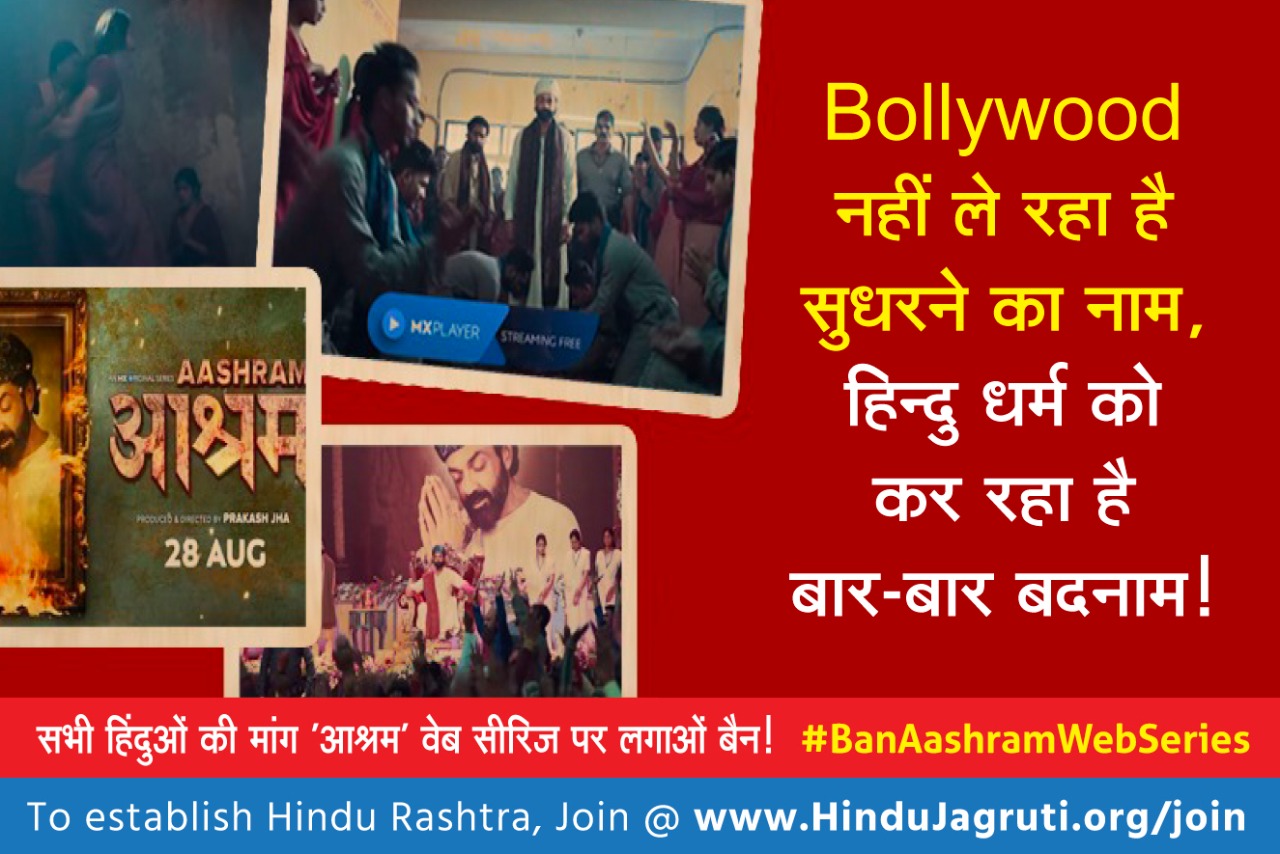 Maha Prasad – This refers to the drug laced laddus that the baba and his followers give to unsuspecting people. Here the baba feeds a devotee’s wife a laddu and rapes her while she is intoxicated. (The prasad holds great significance in a devotee’s life. The humble offering to the beloved God / Guru is sanctified by their blessings and are a source of Chaitanya [Divine consciousness]. The makers have deliberately tried to demean the significance of Prasad by comparing it to drug laced laddus that the baba hands out)

If you really respect all religious beliefs of the land, why did you have to play the sacred Shanti mantra ‘Om purnamadah purnamidam…’ in the background?

For our readers : Baba Nirala’s man Friday is shown chasing a young girl through a jungle and the Shanti Mantra from Ishavasyopanishad ‘Om Purnamadah Purnamidam…’ is chanted in the background. So a shlok that explains the essence of the very creation, is being used as a murder chant. And this is not a one off occurrence, every time there is some violence you hear the Shanti mantra being chanted in the background.

If you had to show that the police are corrupt, why show a Dalit IPS as the corrupt one? You introduce him as someone who got into the system due to reservation and not merit, will this not further alienate the Dalits from the community?

By showing a senior officer of the UP police force, an IG, become honey trapped and cry at the feet of baba Nirala, are you not undermining the entire police system? This portrayal especially when the UP police has been winning praise from the people for their tough stance against gangsters, seems to be a politically motivated.

O Hindus! Wake up & let's unite 4 our dharma
The way in which vulgarity is being served in the name of entertainment & the way #Hindu saints are constantly being insulted, it has become very important now that government should ban such web series. @krishnasdwar#CensorWebSeries pic.twitter.com/vpiJLzcx9T

Even if you wanted to show ‘the dark side of fake godmen’ what was the necessity to include explicit sex scenes? Do you think your ‘fictional’ story is not intriguing enough to get people to watch it without adding in unnecessary nudity? Just like you ‘allude’ to Hindu Dharma while trying to act secular, you could have just ‘alluded’ to what is going on.

It is not the first time that the director has used Hindu elements to try and make some money. He previously tried to market a movie as a modern adaptation of Mahabharata.

With opulent sets, expensive costumes, exorbitant renumeration for the artistes, large film studios find it difficult to recoup costs even with a paying audience. Prakash Jha and MXPlayer have released the entire series for free (albeit with a few advertisements peppered in), which makes one wonder, who is financing the series? Is it a nexus of destabilising forces which want to weaken the moral fibre of the nation that is pouring in money with the surety that the Indian consumer will lap it up and stray from Dharma!