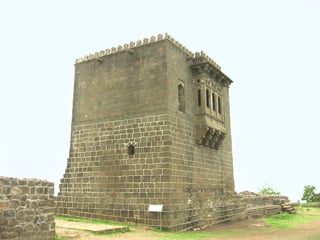 Shivneri fort is birthplace of Chhatrapati Shivaji Maharaj. It is situated near Junnar town in the district of Pune, about 105 Kilometres from Pune.

This fort is surrounded by steep upwards slopes from all four sides and is unassailable. There is small temple of Goddess Shivai and idols of Jijabai (Mother of Shri Shivaji) and Shivaji in his childhood. The shape of Shivneri fort is like Shiv-Pind (Shiva’s sacred symbol; Divine Phallus). This fort is visible as soon as you enter Junnar town. This fort is not that big in area. Dr. John Friar of East India Company visited this fort in 1673. He has mentioned in his book that, this fort can hoard sufficient food to meet the needs of one thousand families enough to last for 7 years.

The present day Junnar was known as Jirna-nagar, Junner and existed prior to beginning of year AD. Junnar was capital of King Nahapan from Shak dynasty. The Satvahan king Satkarni, a son of Gautami, wiped out Shakas and held dominance over Junnar and its surrounding area. Naneghat was commercial route in olden times. Lot of traffic used to pass on this route. To supervise this traffic the fort was built on this route. After Satvahan rule stabilised, they excavated many caves. After Satvahan, Shivneri fort came under the control of Chalukya of Rashtrakut Empire. Yadavas established their rule between 1170 to 1308. During this tenure Shivneri was built as a fort. In 1443 Malik Ul Tujar defeated Yadavas and conquered the fort. Thus the fort came under the control of Bahamani Empire. In 1470 Malik Mahammad, representative of Malik Ul Tujar, surrounded and conquered it again. In 1446 Nizamshahi was established after the death of Malik Mahammad.

In 1493 AD the capital was shifted from this fort to Ahamadnagar. In 1565 Sultan Murtija Nizam held his brother Kasim as captive on this fort. In 1595 this fort and area surrounding it came under the control of Maloji Raje Bhosale. When Jijamata was pregnant, she was shifted to Shivneri fort during night under protection of 500 strong cavalry. Jijamata made took a vow before Goddess Bhavani Shivai on Shivneri fort, that if she begets son she will name him after Goddess. Shri Shivaji Raje was born on 19th February 1630. He left the fort accompanied by his mother in 1632. The fort went under the control of Mughals in 1637. Fishermen rebelled against Mughals in 1650, but Mughals won the battle. In 1673, Shivaji Maharaj made unsuccessful attempt conquer the fort by winning over the fort chieftain Ajijkhan and surrounding the fort. In the year 1678, the Junnar area was pillaged and Maratha army made unsuccessful attempt to capture the fort. After the gap of 40 years, in 1716 Shahu Maharaj brought the fort under the control of Maratha Empire and thereafter it was handed over to Peshvas.

While coming on fort via Seven Doors, if one turns left from main road after crossing the fifth door called Shipai Darvaja, you reach to temple of Goddess Shivai. There are 6-7 caves in the rock behind this temple. These caves are not suitable for overnight stay. There is idol of Goddess Shivai in temple.

After the entry in the fort from last door, Ambarkhana can be seen at the front. It has undergone lot of damage. Earlier it was used to store food grains. 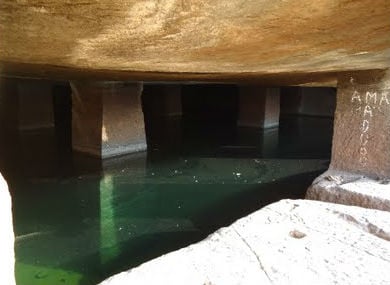 On the way there are many water tanks namely Ganga, Yamuna, etc.

This is a memorial of Shivaji Maharaj on Shivneri fort. Its foundation was laid by first Chief Minister of Maharashtra Shri Yashavantrao Chavan, and it was inaugurated also by him. Bal Shivaji ( Shivaji in his childhood) rotating his small sword and describing his dreams to his mother Jijamata, is the theme of this memorial laid in Shivkunj.

5. Place of birth of Shivaji Maharaj

The road going from the front of above place leads to Kadelot Kada ( A precipice from where a person was killed by hurling down). This sheer drop was used to award punishment to criminals.

Both the main roads leading to the fort go through Junnar town only. Visitors from Mumbai and Pune can come to visit the fort and return within a day.

While taking this route, one has to come to the statue of Shivaji Maharaj installed in front of new Bus stand after entering Junnar town. The way on left hand side of this square leads to a temple about a kilometre away. A trodden lane in front of this temple leads to steep cliff of Shivneri fort. One has to climb the fort with the help of iron chain and steps hollowed out in the steep vertical rock. This route is little difficult and takes around 3/4th of an hour.

b) Route through Seven Doors

If one continues on left hand side, a tar road leads one to the steps at the bottom of fort. While taking this route one comes across seven doors. These are serially called Mahadar Door, Pir Door, Parvangi (Permission) Door, Hatti ( Elephant) Door, Shipai ( Soldier) Door, Phatak ( Gate) Door, and Kulabkar Door as one climbs up. It takes around one and half hour to reach fort.

How to reach Junnar

After one crosses Malshej Ghat on Kalyan-Nagar road, there is a road sign after a distance of 8 to 9 kilometres, indicating that Shivneri fort is 19 kilometres away. This road goes to Shivneri fort via Ganesh Khind (pass). It takes one day to reach fort by foot.