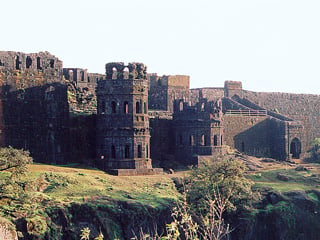 Raigad was Shivaji’s capital, the hill fort where he was crowned (1674 AD) and where he died (1680 AD). Strategically situated on an irregular wedge-shaped mass of rock, detached from the main body of Sahyadri Mountains by a deep valley and inaccessible from three sides, Raigad is 210kms south of Mumbai and 27kms north of Mahad. The fort’s 5.12sq.kms hill-top plateau has three main points Hirakani in the west, Takamak in the north and Bhavani in the east. There is only one pathway to Raigad, probably in keeping with Shiviaji’s strategy “the fort’s approach should be easy for friends and impossible for foes”. A motorable road leads to Chit Darwaja, about 2kms from Pachad, the village at the base, where lies the Samadhi of Jijabai, Shivaji’s mother. A long climb from Pachad takes one to the Mahadarwaza, flanked by two massive bastions and a high curtain wall.

The top plateau is covered with a large number of remains of buildings and reservoirs. Behind the Ganga Sagar reservoir are two high towers, in Muslim style. Behind the towers is the Balekilla or citadel, entered by the Palakhi-darwaza. On way to the right are remains of chambers of women of Royal families and on the left those of the Darbar of Shivaji. On a low mound in the centre is the site of Shivaji’s throne. Further north is the two-row market place, the Jagadishwar temple in an enclosure and the Samadhi of shivaji, and also that of his favourite dog, Waghya.

The history of Raigad, earlier known as Rairi, is obscure. In the 12th century Rairi was a seat of the Shirke-Palegar family. After changing several hands, it was captured by Shivaji from Chandrarao More in 1656 AD. Shivaji chose Rairi for his capital and renamed it as Raigad. The gigantic construction work was entrusted to Abaji Sondeve and Hiroji Indulkar. In its heyday Raigad had more than 300 houses, and structures. After Shivaji, the fort remained in the hands of Sambhaji till 1689 AD, when it was captured by the Mughals. Reverted to the Marathas in 1735 AD, Raigad was surrendered to the British in 1818 AD.