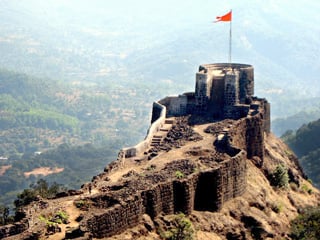 Chhatrapati Shivaji Maharaj had extended his kingdom on the banks of rivers Nira and Koyana. In order to safeguard this area of his kingdom, he felt need to have a well-built fort. This fort is called Pratapgad . As per the records in the history, Pratapgad fort was built in the year 1657. Pratapgad is situated at 8 kilometres, west of Mahabaleshwar, in Jawali taluka of North Satara district. The fort is built on the mound named Deparya, between Par and Kineshwar towns.

On way from Mahabaleshwar to Mahad, there is a place called Kumroshi. From there, it is a journey of half an hour. It is difficult to climb fort. The fort is situated in the area called Jawali forest. Renowned poet Govind described the environments around fort Pratapgad in very lucid words.

Places of interest on Pratapgad

There is pathway on the left side of the bottom of fort. The plaque shows way to Darga Sharif. This is place where tomb of Afzalkahn is situated. This fort has only one main door. Below it there is a stream which carries rain water from upstream down the slope. It is possible to reach the door after climbing few steps. There are bastions inside this door which were used by soldiers guarding the main door. This bastion can be seen by going around in 3/4th of the circle.

As per historical when Chhatrapati Shivaji Maharaj assassinated Afzalkhan after being betrayed by him, his head wad buried under this bastion by Sambhaji Kavaji, a masculine lieutenant of Shivaji Maharaj. When a window of Nagarkhana (A place where drums are placed and played) is opened one can see the face of Goddess’s idol. A story goes around about this Goddess that, Shri Shivaji Maharaj had started a ritual of playing Sanai-Chaughada (A type of religious band) before the Goddess. A priest with Hadap as a surname was deputed to offer Naivedya (food offered to the Deity as part of ritualistic worship) and Panchamrut (a mixture of milk, curd, honey, sugar and pure ghee). This temple of Goddess Bhavani includes Sabhamandap ( A hall in front of sanctum sanctorum) and Nagarkhana.

After climbing 100-200 steps from temple, there is a small door, which is a entrance to the fort. In front, there is quadrangular terrace. From the aerial view, Pratapgad fort resembles a butterfly. Its length is1400 feet and width is 400 feet. It has a unique fortification. The North-western precipices are more than 800 feet in height. There are two water tanks on North-eastern side of the fort. From here one can get panoramic view of Koyna basin. This ends the round trip of the fort.

In the year 1657 Chhatrapati Shivaji Maharaj became too powerful to be tolerated, for the rulers of Vijapur. His strength was on rise. He used to conquer new provinces of Vijapur kingdom from time to time. To restrain Shivaji Maharaj, Afzalkhan was deputed, but Shivaji Maharaj tactfully assassinated him. This incident is recorded in the history in great details. The tomb of Afzalkhan still exists there. It is built at levelled ground on the third stage of down slope amid trees. Pratapgad fort is famous for beauty of nature in and around it.

How to reach Pratapgad

There are two routes to reach Pratapgad fort. One is via Mahad-Poladpur and other one via Wai-Mahabaleshwar. A small hamlet namely Kumbhareshi or Vad can be reached from either side. On South-east side there is a village called Par. The way passing between these two places takes one to Pratapgad fort.