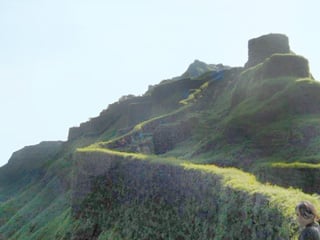 Rajgarh fort enjoys a unique position among the hill forts of Maharashtra. It possesses all the salient features of fort architecture which are peculiar to the Deccan region. Situated on one of the spurs of the Sahyadri Mountains known as Murum hill, Region is about 35kms south-west of Pune. The fort is at a height of approx. 1300 metres from sea-level and comprises three terraces (machis) and a citadel (Balekilla). There are four gates called Gunjavane, Pali, Alu and Kaleshwari or Dindi gate. The first two gates lead to the Padmavati machi, the third to the Sanjivani and the last to the Suvela machi. Rajgarh looks like a winged bird flying in the sky – the Padmavati and the Sanjivani machis forming its two wings and the Balekilla and the Suvela machi its main body.

All the four of the fort have remains of buildings which included residential quarters, sadar or state offices, bazaar or business quarter, granary, armoury, temples, etc. the fort had ample supply of water through tanks, cisterns and wells. The water-supply being better on the Padmavati machi, it was major centre of activity on the fort.

Rajgarh, formerly known as Murumdeo, was earlier held by the Nizamshahi and Adilshahi rulers. By 1648 AD, it was under the firm control of Shivaji, who gave it the new name Rajgarh, the king’s fort. Shivaji’s construction activities here continued till 1670 AD. For nearly twenty five years Rajgarh was the pre-coronation capital of Shivaji. Out of Shivaji’s short life of fifty years (18,306 days) his stay of 2827 days at Rajgarh was the longest. The fort witnessed a number of major political events of the Maratha period.

It was from Rajgarh that Shivaji went to meet Afzal Khan in 1659 AD. His departure to Agra return from there, both these historic events took place at Rajgarh. Rajgarh, Shivaji’s second son, was born here. By ‘Treaty of Purandar’ in 1655 AD, shivaji ceded 23 forts to the Mughals, but not Rajgarh. During the Peshwa period Rajgarh did not play any significant part mainly due to the shifting of political activities from the hill forts to the cities. Rajgarh remained with the Sachiv family of Bhor till 1947 AD.