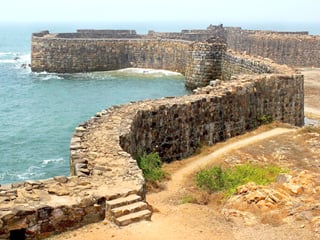 Sindhudurg fort stands on a rocky island, known as Kurte, barely a km, from the Malavan is 510kms south of Mumbai and 130kms north of Goa. Sindhudurg was built in 1664-67 AD by shivaji when all his attempts to take the island fort of Janjira proved futile. The construction was done under the supervision of Hiroji Indulkar, an able architect. Shivaji had invited 100 Portuguese experts from Goa for the construction of the fort. It is also recorded that 3000 workers were employed round the clock for three years to build Sindhudurg. It was the body from the Sack of Surat that went into the building of Sindhudurg.

One of the best preserved forts of the Marathas, the 48 acre Sindhudurg fort has a four kms long zigzag line of 9 metres high and 3 metres wide rampart with 42 bastions. Apart from the huge stones, the building material involved 2000 khandis (72,576kgs)of iron erecting the massive curtain wall and bastions. A notable feature is that the foundation stones were laid down firmly in molten lead.

The fort is approachable from the Malavan pier by a boat through a narrow navigable channel between two smaller islands of Dhontara and Padmagad. The main gate, flanked by massive bastions, faces the city. On the parapet, close to the entrance, under two small domes Shivaji’s palm and footprint in dry lime are preserved. Also, in thefort there is the Shivaji temple – the only one of its kind in the country – where the image of Shivaji is without a beard! Inside the fort there are some temples, tanks and three wells. It also houses some twenty Hindu-Muslim hereditary families. On a rocky island between Sindhudurg and the coast stood the small for of Padmagad, now in ruins. It acted as a screen for Sindhudurg and was also used for ship-building.

After Shivaji, Sindhudurg passed through the hands of Rajaram-Tarabai, Angres, Peshwa and the Bhosales of Kolhapur. It was briefly captured by the British in 1765 Ad And was renamed by them as ‘Fort Augustus’. Later in 1818 AD, the British dismantled the fort’s defence structures.