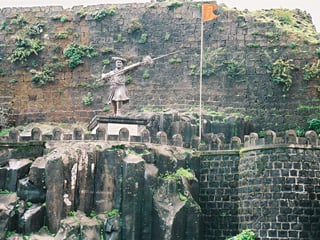 Panhala or Panhalgarh, about 19kms north-west of Kolhapur, is possibly the largest and most important fort of the Deccan. Roughly triangular in shape, the hill fort stands at a height of about 850 metres and has a circumference of approximately 7.25kms. Half of its length is protected by a natural scarp reinforced by a parapet wall and the remaining half is surrounded by a strong stone wall strengthened with bastions. The fort had three magnificent double walled gates, out of which two have survived. The Teen Darwaza to the west is an imposing and powerful structure. There are a number of ruined monuments in the fort. The most impressive among them are the three huge granaries. The largest among them, the Ganga Kothi, cover nearly 950 sq m space and 10.7 metres high. In the north-east corner there is a double story building, called Sajja Kothi, where Shivaji had imprisoned his errant son, Sambhaji.

Panhala was the capital of the Shilahara king Bhoja II during 1178-1209 Ad. It was successively held by the Yadava and Bahamani Kings. In 1489 AD, the fort and the territory was taken over by the Adil Shahi dynasty of Bijapur. Shivaji seized the fort in 1659 AD. It was from here that Shivaji, when encircled by the forces of Siddi Johar, escaped one rainy night to Vishalgarh. Later, the fort remained with the Marathas, except for a short period in between, when it went to the Mughals. The fort remained with the Kolhapur State till India achieved independence.

The famous Marathi poet Moropanta (1729-94Ad) was bron and brought up at Panhala. There is also the Samadhi of Ramachandra Amatya, the author of Ajnapatra, an important work on statecraft, including for construction. Today, Panhala is a sort of hill station and provides all the necessary facilities for tourists.