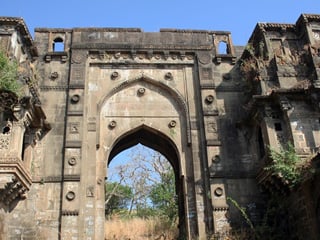 Narnala fort, standing upon an isolated hill of the Satpuda range, is 18kms north of Akot, a taluka town in Akola district.  It is 973 metres above sea-level and consists of three distinct hill forts: Jafarabad in the north-east, Narnala fort, the principal fort, in the centre,and Teliagarh in the south-west.  It was protected by a curtain wall about 9 metres high with 67 bastions and six large gates.  The Shahnur or “Mahakali” gate, built by Fateh-ullah Imad-ul-Mulk in 1487 AD, is not notable example of Sultanate architecture.  The white sandstone gateway has Arabic inscriptions on it and is flanked upon on either side by galleries and rooms, probably for guards, but the most striking feature of the gateway is the overhanging balconied windows, two on either side.  Within the fort are a number of tanks and cisterns, large cannon, known as nau-gazi top, and old palace, an armoury, a baradari, a mosque and other buildings, all in ruins.

According to tradition a very old fort, Narnala fort was repaired by Ahmad Shah Bahamani around 1425 AD, and in 1487 AD it came under the control of Fateh-ullah Imad-ul-Mulk, the founder of Imadshahi at Ellichpur, now called Achalpur.  During Akbar’s rule.  Narnala was a Suba. Narnala was captured by Parsoji Bhosale I in 1701 AD and remained with the Marathas till it was taken over by the British in 1803 AD.

The history of Achalpur, formerly known as Ellichpur, could well be said to be history of Vidarbha (Berar) itself.  Nawab Sultan Khan, the first of his dynasty, built the fort at Sultanapura in Achalpur on the south the bank of the Sarpan River in about 1754 AD.  Much of the part of the fort is now in completely dilapidated condition.  The city was fortified by Sultan Khan’s son Ismail Khan by a huge and solid rampart wall of masonry with four gates.  Most of the fortifications and the gates are still intact.