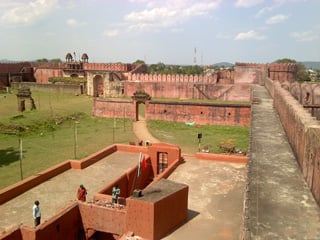 Pauni, in Bhandara district, is 82kms south-east of Nagpur.  The present town, about three kms south-west of the Wainganga River, is engirdled by medieval fortifications embellished by imposing gateways, of which those situate to the west are almost intact.  The majestic fortifications, which at some places are extant to a height of about 20 metres, were encircled by a moat of about 20 metres in width.  The ancient moat has now turned into a small seasonal lake and is called Balasamudra.  The fort was constructed by the Gond ruler Bakht Buland in the early 18th century and was taken over by Raghuji Bhosale I around 1710 AD.

Pauni, an ancient place, has yielded the relics of one of the greatest Stupas of India and definite evidence of a flourishing Buddhist establishment.  The Pauni rampart has yielded the copper plate grant of Pravarasena II of the Vakatakas who ruled over this region.  So it is possible that the clay of the rampart goes back to a period much earlier than the medieval.

Nagardhan, ancient Nandivardhan, the first capital of the Vakatakas, is 34 kms northeast of Nagpur and about 5kms south of Ramtek, famous for its fortified hill temple.

The present Nagardhan fort (land fort) was probably built by Raghuji Bhosale I around 1740 AD, must have served the purpose of guarding the eastern approaches to Nagpur.  Square in shape, it has an outer rampart with bastions and had an inner wall surrounding the buildings.  The main gate, still in good condition, is on the north-west side.  In the fort there is a temple below the ground level and the idol is placed on a ledge of a well like structure.

Not far away from the present for there is a place where big sized bricks of ancient periods are often discovered.  This is said to be a site of the capital-cum fort of the Vakatakas.