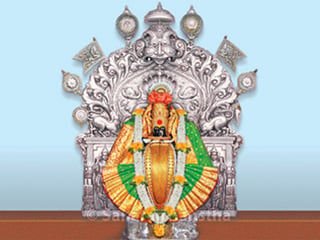 1. Complete and half Shakti-peeth (Seats of Shakti) and their functions

The Shakti manifests in three forms in the universe, namely Iccha-shakti (Will), Kriya-shakti (Action) and Dnyan-shakti (Knowledge).

The ‘Complete Shakti-peeth’ functions either on Iccha, Kriya or Dnyan Shakti.

Mahur, Tuljapur and Kolhapur are independent or complete Shakti-peeths.

Vani (Saptashrungi) Peeth is considered as a half Shakti-peeth, meaning the remainder, since it functions on the combined strength of Iccha, Kriya and Dnyan and is a confluence of Shakti from complete Peeths.

2A. Deity, symbol, function and level of function of Shakti-peeths of Maharashtra

2B. Source of Shakti-peeths in Maharashtra Due to the active flow of Shakti from the self-originated three and a half Shakti-peeths which is concentrated in Maharashtra, Maharashtra has benefitted from the lineage of many Saints and Sanatan Hindu Dharma still exists in Maharashtra.

Mahalakshmipeeth represents the swirling of a ring of Dnyan-shakti around itself. Bhavanipeeth functions by emitting a beam of Kriya-shakti from its focal point, whereas Renukapeeth emits rays charged with Kshatratej.

In Maharashtra, the seats of these three Shakti-peeths are in the sequence of Ichha, Kriya and Dnyan and crowning their head is the nirgun Shakti-peeth of Vani.

In fact, through their structure these four seats form a crown on the map. This kind of functioning and balanced relationship between Shakti-peeths is a Divine play of Shakti.