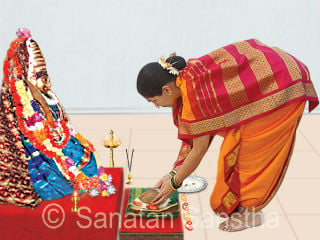 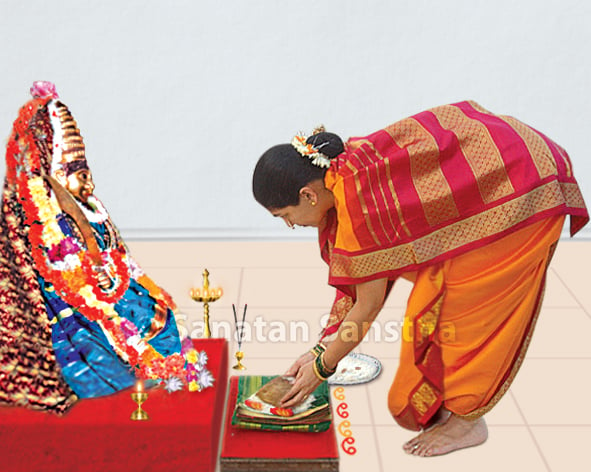 1. What is the significance of offering oti to a Goddess?

‘The puja of a Goddess should be concluded by offering Her a khana and a sari. This ritual is performed to invoke Her nirgun (Non-materialised) form to assume a saguṇ form’ to bring about our spiritual progress or welfare. All panchopchar-pujan are associated with the nirguṇ form of God. When offering the oti, the prayer unto the Goddess asking Her to manifest Her nirguntattva activated through the panchopchar-pujan performed before it, helps Her manifest in the sagun form.  (Note: Ritual of ‘offering a sari and a khana is called as ‘Oti bharane‘.)

2. The correct method of offering oti to a Goddess 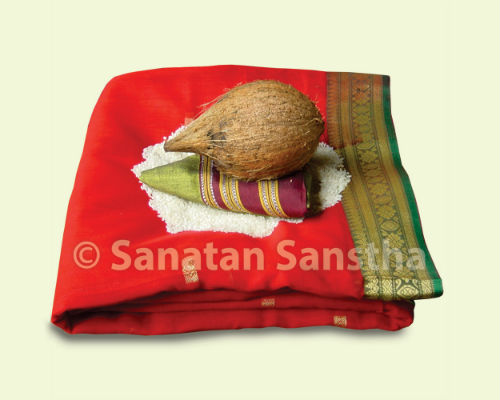 A. The sari offered to the Goddess should preferably be made of cotton or silk fabric, because when compared to other fabrics, these fabrics have a better capacity to attract and retain the sattvik frequencies emanating from the Goddess.

B. Place the sari in a plate along with a khana, coconut and some rice. Place the coconut with the tuft towards the Goddess. Stand in front of the Goddess with the palms cupped at the chest level.

C. Pray with utmost bhav (spiritual emotion) to the Goddess to bless you with chaitanya and for your spiritual progress. This will help in activation of the Devitattva.

D. After offering all the substances from the oti at the feet of the Goddess, place some grains of rice on them.

E. If possible, the woman offering the oti (only a married woman has the right to offer it) should wear the sari offered to the Goddess and consume the coconut as Prasad (Holy sacrament).

3. The subtle process in performing the ritual of Oti bharane and its merits

B. With the help of the Pruthvitattva from the cloth, waves of Sattva component are emitted. These waves, with the help of the Apatattva from the coconut water gain momentum and become functional. As a result, a protective sheath of these waves is formed around the body of the worshipper. The waves of Sattva component the Goddesstattva which permeate the sari and the khana help in purifying the pranadeha (Vital body) and pranamay-kosha (Vital energy sheath) of the worshipper.

D. Since rice grains are all-encompassing, they they are in the forefront in absorbing and emitting Chaitanya. That is why, they play a significant role in the ritual of oti.’

4. What is the benefit of offering a specific colour sari and khan offered to the Goddess ?

Offering a sari and khana of a specific colour known to attract maximum waves of a specific Goddess activates the Devitattva in the individual in the least possible time. The table ahead gives Names of some Goddess and the colour which attracts the Principle of that Goddess (that is, colours associated with the Principle of the Goddess) in the least possible time and in maximum proportion.

Note : There is no need to offer a sari and khana of a specific colour to a Goddess to receive a certain favour from Her, because the tarak (Saviour) or marak (Destroyer) form of the Goddess gets activated and benefits the individual depending on its bhav or prayer of the individual.

5. Why is it beneficial to offer, a nine yard sari instead of a five yard one to a Goddess ?

When a worshipper with bhav for a Goddess, and performing samashti sadhana according to Gurukrupayoga (Path of Guru’s Grace) offers oti, the colour of the sārī does not matter, because anyway the worshipper derives the expected benefit because of her bhav. However, since for seekers in the preliminary stage or for those performing sadhana of karmakanda (Spiritual practice of rites, rituals and observances performed at the physical level) every act should be as per the customs, for them it is more appropriate to offer a nineyard sari to the Goddess instead of a five-yard one. Offering a nine-yard sari to a Goddess symbolises the functioning of the Goddess as per the need of the worshipper through Her nine forms. The nine-yard sari represents the functioning of the Goddess through Her nine forms. Offering a nine-yard sari thus implies invoking the basic nirguṇ Shakti (which encompasses all the forms of the Devitattva) to manifest in all Her nine forms to perform the required mission. The number ‘9’ represents the nine main forms of Shri Durgadevi.’

6. Why is the khana offered to a Goddess folded in the shape of a triangle ?

‘The triangle is associated with the Iccha-shakti (Energy of the will) of Deity Brahma from the trinity of Deities – Brahma, Vishṇu and Mahesh. The waves of Iccha-shakti from the universe too follow a triangular path, moving from right to left. Offering a khaṇ wrapped in a triangular manner to a Goddess means strengthening of the Iccha-shakti of Shri Durgadevi and seeking Her grace with the intention of making spiritual progress.’ – Pujya (Mrs.) Anjali Gadgil