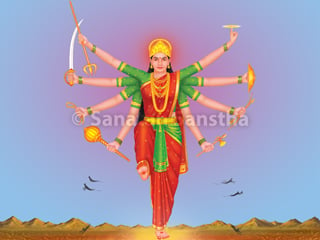 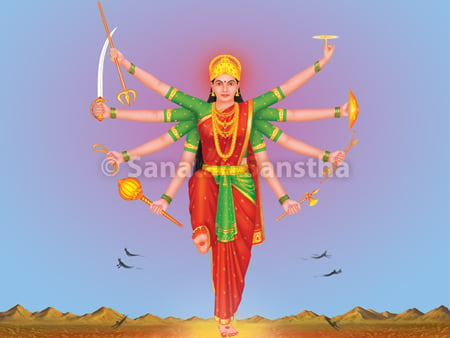 1. Origin and meaning of Parvati

Parvati is the daughter of the Himalaya parvat (Mountain) or one who has undertaken austerities atop a mountain.

The Holy texts Kashyapashilpa and Manasar describe how an Idol of Parvati should be sculpted. They state – by Herself, Parvati should be portrayed with four arms and when beside Shiva, She should have two arms.

When alone, a crown of matted hair should adorn Her head. The two upper arms should hold a lotus and a noose and the two lower arms should be in a posture bestowing a blessing (known as Varadamudra) and in a posture depicting protection (known as Abhayamudra). When accompanying Shiva, She should be seated on a lotus or standing embellished with ornaments. Her right hand should hold a lotus and the left should be straight by Her side.

5. One of the forms of Parvati – Durga

5A. Origin and meaning of Durga

5B. Unique characteristics and mission

5C. Science pertaining to the Idol

Shri Durgadevi through the subtle dimension suggested the symbolic meaning of the various body parts in Her picture.

6. One of the forms of Parvati – Kali

6B. Unique characteristics and mission

Kali dances upon the chest of Mahakal, that is, Shiva. In the Kalivilas Tantra, She is also called Shavasana or Shavarudha. In the Path of Tantra, both, a shav (Corpse) and Shiva are names of the same Principle. The first manifest form of the formless Brahman is shav. It is motionless. When vibrations of energy are generated in it, it is activated to create the universe and is referred to as Shiva. In other words, Brahman devoid of Shakti is a shav and Brahman along with Shakti is Shiva. The ‘i’ in Shiva represents Shakti. He being the support of the Divine play of the Mahashakti (Supreme Shakti), is known as Shavasan. ‘Hesauho (हेसौः)’ is the bij of a corpse and is known as a shavabij or a pretbij. At the time of Creation, this corpse assumes the form of a padma (Lotus) and becomes the asan (Seat) or site of Divine play of Mahamaya Kali. This is known as Kali’s mahapret-padmasan (The great lotus seat of the corpse). The same meaning has been conveyed in the shloka ahead.

Meaning : Devi Kali, seated on the red lotus, is the form of Mahamaya (Great Illusion). She bestows the corpse, that is, the inactive Brahman with chetana.