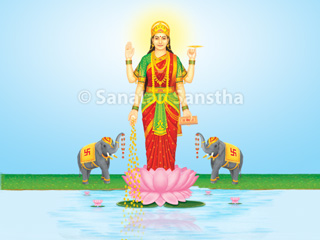 Lakshm means a symbol, from which the word ‘Lakshmi’ has been derived. It is not possible to point out exactly which symbol represents Lakshmi and from which symbol She may be perceived. A substitute word for Lakshmi is ‘Shri’ that means adornment, lustre. Since the word ‘Shri’ is derived from the symbol swastika, it seems quite likely that the symbol representing Lakshmi must be the swastik. We come across both the words – Shri and Lakshmi in the Rugveda. A supplement of Rugveda is famously known as the Shrisukta.’ ‘Shri’ is the Deity of fortune. Vedic literature has described the expansive form of Shri or Lakshmi as the Deity who ‘enriches’ by bestowing prosperity, wealth, health and longevity, progeny and continuation of the family tree, abundant food grain, servants, etc.

A deeper meaning has been attached to the blossoming of the lotus with the touch of the rising sun. The sun is the representative highest being of the ‘dyu’ region (Dyulok is a part of Swargalok [Heaven]) while the earth is his beloved. The implied meaning of this is that the union of heaven and the earth gives birth to the universe. In this way, Sages have associated the earth, that is, Shri, who has the capacity to reproduce, with the lotus.

With a view to express Lakshmi’s short comings, Parvati called Her ‘Lola’, which means one who is fickle. Fickleness and unsteadiness are indeed Lakshmi’s weakness. Obviously, here Lakshmi refers to wealth and riches, opulence and splendour. Wealth in a family is not sustained over the generations. It finds new destinations. The reasons for this are vices, opulence, haughtiness, extravagance and stupidity of men in the family. Consequently, if Lakshmi is compelled to leave the house, is it Her fault ? Lakshmi is blamed for the defects of man.

2B. Behaves as per the wish of Her master

She behaves in accordance with the wishes of Shrivishnu.

2C. Strength and arrogance are the two sons of Lakshmi

Strength and arrogance are the two sons of Lakshmi. They are called so because frequently it is seen that the one who is blessed by Lakshmi becomes powerful and arrogant as well.

3A. Shakti associated with Shriram – Sita

In the Valmiki Ramayan, Sita is Ram’s wife. She is steadfastly devoted to Her husband. Her form is extremely gentle and sattvik. In the Adhyatma Ramayan too She is described similarly. However, the Adbhut Ramayan portrays Her as a fearsome form of Shakti. This Ramayan was composed around the 14th century AD. During that period, the Shakta sect was widespread in Bharat. The concept that Sita is the Adishakti (Primal Energy) was firmly established between the tenth and the eleventh centuries. The Adbhut Ramayan then went beyond this. When the thousand-headed Ravan was not getting killed at the hands of Ram, Sita wilfully assumed a ferocious form with huge legs. She wore garlands of skulls. She also held the head of the demon Chanda and carried a bell and a noose in Her hand because of which She was called Chandashesha and Ghantapashadharini respectively. Then in a flash, She tore apart Ravan’s thousand heads and killed him.

3B. Shaktis associated with Krushna

Shaktis associated with Krushna are Rukmini and Radha.

Meaning : Kirti (Fame), mati (Intellect), dyuti (Light), pushti (Grace of God), samruddhi (Prosperity), tushti (Happiness), shruti (Spiritual knowledge), smruti (Memory), bal (Strength), medha (Spiritual intellect), shraddha (Faith), arogya (Health), jai (Victory), etc. are all the Shaktis which have originated from the fractions of Deities associated with them. All these Shaktis are essential for a prosperous life and they serve Shri Lakshmidevi like maids.

4. Some forms of Lakshmi

As Lakshmi proved to be the bestower of opulence, Her following forms were conceived :

Above eight are worshipped in some form or the other.

According to the Vishnudharmottarpurana, when Shri Lakshmi is to be portrayed beside Shrivishnu, She should have two arms and when She is to be depicted alone, She should have four arms. In the latter form, an elephant, a lotus, gold (in the form of ornaments or coins) and a bel (Aegle marmelos or wood apple) tree and bel fruit are associated with Her. Mostly, Lakshmi is depicted seated at the feet of Shrivishnu.