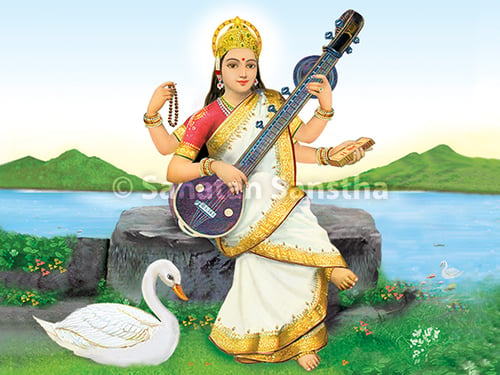 Meaning : We know Brahmanidevi. We meditate upon that great Shakti. May She inspire our intellect.

2A. Origin and Meaning

Implied meaning : An active form of inactive Brahma; hence, She is called the activeness-inducing Shakti to the trinity – Brahma, Vishnu and Mahesh.

Some other Names of the Shaktis associated with Brahma are Vak (Speech), Vagdevi (Deity of speech), Vagishwari, Vani, Sharada, Bharati, Vinapani, etc.

Deity of knowledge and art. Upanishads consider oneness of Shri Saraswati with speech, and pray to Her for enhancing intelligence and for acquiring sweetness in speech.

Note 1 – White swan : Sometimes, She is depicted as sitting on a swan; whereas, at other times the swan is in the background. In Buddhist and Jain traditions, peacock is Her vehicle.