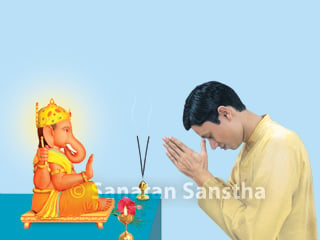 What is the correct way of doing Namaskar ?

B. After joining the hands one should bow and bring the head forward.

C. While tilting the head-forward, one should place the thumbs at the mid-brow region, i.e. at the point between the eyebrows and try to concentrate on the feet of the Deity.

D. After that, instead of bringing the folded hands down immediately, they should be placed on the mid-chest region for a minute in such way that the wrists touch the chest; then only  should the hands be brought down.

Underlying Science in this action

A. The fingers should not be stiff while bringing the palms together because this will lead to a decrease in sattva component from the vital and mental sheaths and thus increase the raja component in them. By keeping the fingers relaxed, the subtlest sattva component will get activated.

B. In the Namaskar posture, the joined fingers act as an antenna to assimilate the Chaitanya (Divine consciousness) or the Energy transmitted by a Deity. While joining the palms, the fingers must touch each other because leaving space between the fingers will result in accumulation of energy in that space. This energy will be immediately transmitted in various directions;  therefore the seeker’s body will lose the benefit of this potent energy.

C. About the space to be maintained between the palms :

D. After joining the palms, bow a little. This posture puts pressure on the navel and activates the five vital energies situated there. Activation of these vital energies in the body makes it sensitive to accepting sattvik frequencies. This later awakens the ‘Atma shakti’  (i.e. soul energy of an embodied soul). And later, Bhav is awakened. This enables the body to accept in large measures the Chaitanya emitted by the Deity.

E. Touch the thumbs to the mid-brow region. (Please see images above.) This posture awakens the Bhav of surrender in an embodied soul, and in turn activates the appropriate subtle frequencies of Deities from the Universe. They enter through the ’Adnya chakra’ (Sixth of the 7 chakras in the Kundalini) of the embodied soul and settle in the space parallel to it at the back interior of the head. In this space the openings to all the three channels converge; namely, the Moon, the Central and the Sun channels. Due to the movement of these subtler frequencies in this space, the Central Channel is activated. Consequently it facilitates the speedy transmission of these frequencies throughout the body, leading to purification of both the gross and subtle bodies at the same time.

F. After doing Namaskar, to completely imbibe the Chaitanya of the Deity (that has entered the hands by now), instead of bringing the folded hands down immediately, place them on the mid-chest region in such a way that the wrists touch the chest.The ‘Anahat chakra’ is located at the centre of the chest. Akin to the Adnya chakra, the activity of the Anahat chakra is also to absorb the sattva frequencies. By touching the wrists to the chest, the Anahat chakra is activated and it helps in absorbing more of the sattva component.

Q. What is the reason for not wrapping a cloth around the neck while performing circumambulation, doing Namaskar, ritualistic worship, sacrificial fires, chanting and while visiting Guru and deities?

A. When a cloth is wrapped around the neck, it does not activate the Vishuddha chakra (in the throat region) and hence an individual gets less benefit of the sattva component. (More information on this is given in Sanatan’s Publication ‘Part 3: Vol 29: Bhaktiyoga 4: ‘Spiritual Science in the ritualistic worship with sixteen substances’.)