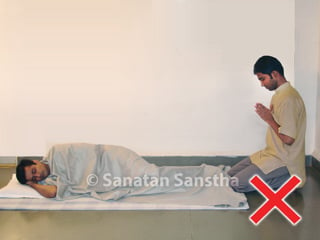 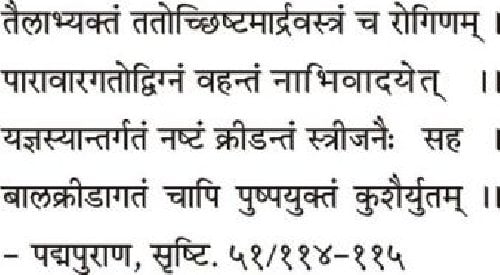 Meaning: Namaskar should not be done to one who has applied oil to his body (and has not had a bath), who has not washed his hands and mouth after eating, who is clad in wet clothes, who is ill, who has entered the ocean, who is in despair, who is carrying a load, who is engaged in worship through sacrificial fires, who is engaged in sexual activity, who is playing with a child, and who holds a flower and darbha (a type of sacred grass used in religious rites) in his hand. – Padma Purana

The science in all this is given below, corresponding to the respective individuals and situations.

One who has oil on his body: A person who has applied oil to his body; and has not taken bath has a high raja component in his body.

One who is clad in wet clothes: Less sattva frequencies are emitted from such a person.

One who is ill: The raja and tama components in an ill person increase due to the illness.

One engaged in worship through sacrificial fires:

2. Also his Kundalini energy is activated to a large extent. By doing Namaskar to him there is a possibility of distracting him and disturbing his spiritual practice.

3. By doing Namaskar to a person engaged in such worship, there is a possibility of increasing his ego, which will reduce his spiritual emotion.

One who is playing with a child: A person playing with a child is experiencing happiness, hence, there is a very minimal possibility of activation of his Kundalini. (Frequencies of Bliss are transmitted from a person whose Kundalini is activated. As the energy of the Kundalini is the exact replica of Divine Energy, activation of this Energy gives experience of Bliss.) By doing Namaskar to such a person we will not be able to derive complete benefits from it.

One with a flower and darbha in his hand:

2. If the level of the person who is doing Namaskar is low, then he will not be able to tolerate this energy and he may even experience distress.

Along with the individuals referred above, Namaskar should also not be done to the following individuals:

One facing the South: Yama frequencies are mostly emitted from the Southern direction. An individual facing South generally comes in the range of such frequencies and also in the region of attraction boundary, and hence a whirlpool of these frequencies gets formed around him. By doing Namaskar to such an individual, the transmission of Yama frequencies starts circulating in the body of the embodied soul doing Namaskar. Due to the rapid circulation of these frequencies in the body, the flow of five vital energies is reduced and the flow of energies located in the lower region accelerates. This may cause distress to the embodied soul and that is why if possible, one should not do Namaskar to a person facing South direction.

A sleeping person: Since a sleeping person is parallel to the ground, the distressing frequencies emitting from the ground get attracted towards his body and it gets charged with distressing frequencies. The flow of five vital energies and the blood circulation is always at low pace while in the sleeping state. In such a state, sub-vital energies from the body start gaining speed and the wasteful gases start circulating and moving downwards. This leads to polluting the area around the body due to gaining momentum of the raja and tama emitted from his body. If one does Namaskar to such an individual whose body emits the raja-tama predominant frequencies, then it can cause distress to the individual doing Namaskar. That is why one should avoid doing Namaskar to a sleeping person.