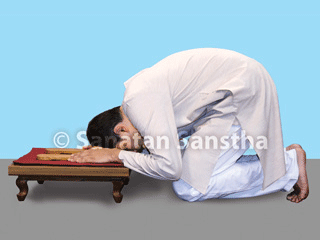 Do and donts of doing Namaskar to Saints

1. The portion of head, which should be placed at the feet :

We can imbibe maximum Chaitanya through the Brahmarandhra (the seventh chakra of the Kundalini system located in the crown of our head). Since it (Brahmarandhra) cannot be placed at a Saints’s feet, the part of head beginning above the forehead is to be placed at the feet of Saints. Due to this, maximum Chaitanya emanating from Their feet can enter into the one doing Namaskar.

2. The exact spot to place one’s head on a Saint’s feet:

The big toes of Saints emit maximum Chaitanya; hence we should place our head on the big toe, than on their foot. If we are in a position to touch both the toes, then place the head on the right big toe.

3. The position of hands when placing the head on a Saint’s feet:

b. Some doNamaskar by placing hands on the ground. This is also wrong because if the hands are placed on the ground then the Chaitanya emanating from the Saint’s feet are absorbed by one and then returns to the earth through the hands of the one doing Namaskar. Thus the person does not benefit from it.

d. The hands are to be positioned in such a way that the palms are placed on the feet..

1. Some place their nose on a Saint’s feet. Due to this they receive less  Chaitanya emitting from the feet.

2. Some rub their nose on a Saint’s feet. This stops the flow of Chaitanya coming towards us.

3. Some do Namaskar by placing their forehead, nose and lips respectively on a Saint’s feet. Very little Chaitanya can be imbibed by doing this.

4. Some kiss a Saint’s feet. This is an imitation of Christians who kiss the hand of their priests. One can imbibe very little Chaitanya through the lips.

5. Some place their head first on one foot and then on the other. There is no need to do this as placing it on any one foot is convenient and adequate.

How to do Namaskar to the wooden footwear (paduka) of Saints?

‘The left paduka symbolises Lord Shiva and the right symbolises Divine Energy. The left paduka is the unmanifest saviour energy and the right is the unmanifest destroyer energy of the Supreme God. The saviour or destroyer energy of the Supreme God emanates from the ‘pegs’ of the paduka as per the need. When we do Namaskar by placing our head on the ‘pegs’ of the paduka, some may experience distress due to the inability to tolerate the manifest energy emitting from it. Hence, while doing Namaskar to the paduka, instead of the pegs, place the head on the foremost part i.e. the place where the Saints place their toes.’

From the examples given here it will be clear how one gets spiritual experiences by doing Namaskar in the correct manner as described in the article above.

A. By placing the head at the feet of HH Bhaktaraj Maharaj, the mind became thoughtless and I felt He belongs to us: Once, at Mortakka in Indore Dist. (Bharat) I attended a Bhandara of HH Bhaktaraj Maharaj (also addressed as Baba). When I met Him, I placed my head on His feet. At that time I suddenly lost my bearings – who am I or where am I etc. After  doing Namaskar we were taken to some other place to keep our luggage. I went to off load my luggage but realised that since I was in an altered state of consciousness I had forgotten all my bags at Baba’s place. In the very first meeting with Baba, I had started feeling as if He belonged to us and I belonged to Him. – Ms. Sudha Manjrekar, Borivali, Mumbai.

B. The tiredness due to satseva (service unto God) vanished after placing the head at the feet of HH Bhaktaraj Maharaj: In 1995 there were ‘Amrut Mahotsav’ celebrations of HH Bhaktaraj Maharaj at Indore. In preparation for this celebration many months in advance, many seekers worked hard and stayed up late nights. While at Indore, I had an opportunity to render satseva. While leaving from Indore, we had an opportunity to visit HH Bhaktaraj Maharaj. During those days I was running a high fever. While placing my head on Baba’s feet, I felt like sleeping there in that position. When I got up after doing Namaskar I felt very fresh and all my tiredness and fever vanished. – Mr. Sudhakar Manjrekar, Borivali, Mumbai.

(The energy of Chaitanya emitted from the Saints’ feet helps in purification of the vital body, which leads to an increase in vital energy. Hence, the seeker’s tiredness was reduced and he felt energetic. – Editor)