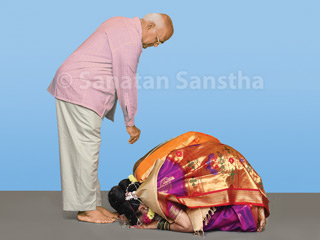 Marriage means uniting two principles; i.e. the principles of Lord Shiva in the form of the husband and the principle of Goddess Parvati as His wife. Lord Shiva represents the Will for an action and Goddess Parvati represents Divine energy. For a successful completion of any action both aspects are required, i.e. the Will for the action and the energy to actually perform it. The Will in the form of Lord Shiva is unmanifest, but it comes alive when it is charged with Divine Energy, which manifests bringing the action to completion.

2. Why do Namaskar together to elders after marriage?

After marriage both the embodied souls enter the householders stage. It is very important to obtain the blessings of the elders jointly to perform various activities in life in this stage; when the couple is complementary to each other. Thus doing Namaskar together leads to the activation of frequencies of Lord Shiva and Divine Energy from the Universe, which also help in developing humility in the embodied souls. It results in the fulfilment of every deed in the householder stage and yields desired fruit, leading to a minimal give and take account being generated. That is why after marriage, a couple is required to perform every action together, complying with each other even in a deed like paying Obeisance (Namaskar). If a husband and wife have more than 50 percent spiritual level or spiritual emotion towards God then, their doing Namaskar together or individually or even mentally will bear the same fruit. That is why, instead of the actual deed, the actual spiritual emotion towards God while performing a deed has extraordinary importance. (Namaskar can be paid individually too, if the partner is not available. – Editor)

3. On which side of her husband should the wife be while doing Namaskar?

While performing any act the wife should stand to the right of her husband. The husband represents the ‘Moon’ channel. The wife is considered to be the other half of her husband and represents the ‘Sun’ channel. The Sun channel is symbolic of the manifest functional Divine Energy of the Adishakti, which is the provider of energy to any action. The Moon channel, indicative of the God principle, is symbolic of Lord Shiva who actually functions on the strength of the energy provided by the Adishakti. As the Divine Energy of Lord Shiva, the wife should stand to the right of her husband and support him in every action. In every ritual the wife without performing any actual act, provides him with the ‘Energy for Action’ of Goddess Durga which is required for a ritual, by placing four fingers of her right hand on his right arm. This is why the act performed by the host and his wife by virtue of being complimented by Lord Shiva and Divine Energy bear fruit in a short period.

4. Why should a married woman bow thrice to the elders?

A married woman symbolises the hidden energy of the unmanifest Adimaya in its unmanifest stage. She is the one who is a manifest form of Adishakti, one who achieves non-duality from the duality prevailing in the Maya (Great Illusion). When we perform any action thrice or pronounce anything thrice, God’s resolve becomes operational at the three levels of Will, Action and Knowledge. This results in the completion of a task. A married woman has the seed of Adimaya and Adishakti in a dormant stage. When she bows thrice, raja component gets activated and along with the manifestation of the spiritual emotion of humility within her, the Godliness in the elderly person is also activated. This Godliness provides her with manifest energy to perform a task. This energy in turn activates her ‘soul’ energy and provides momentum to her willful actions and with the strength of Adimaya, she takes her family to a higher level. Since her husband receives the benefit of raja component of Chaitanya emitting from her, he too can actually work in the form of Lord Shiva in the midst of Maya.’