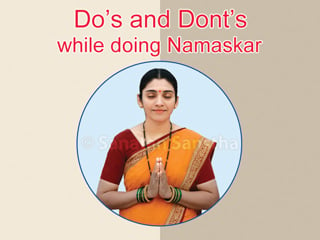 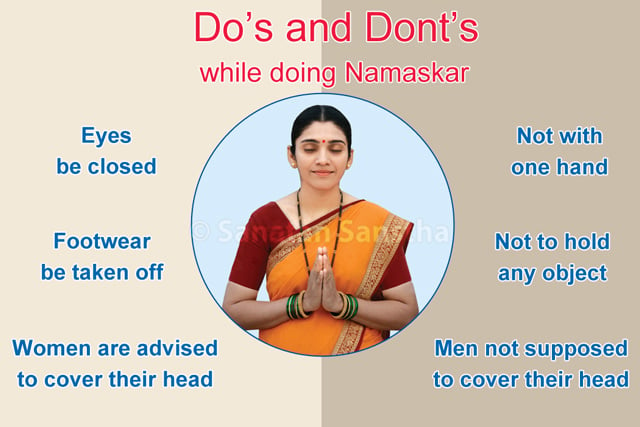 Q. Why should the eyes be closed while doing Namaskar?

A. ‘Joining hands while bowing the head amounts to saluting God or the divinity in the person in front. The eyes are closed while doing Namaskar to God or any respected person, to enable one to have the vision of God within us.’

Q. Why should the footwear be taken off while doing Namaskar? 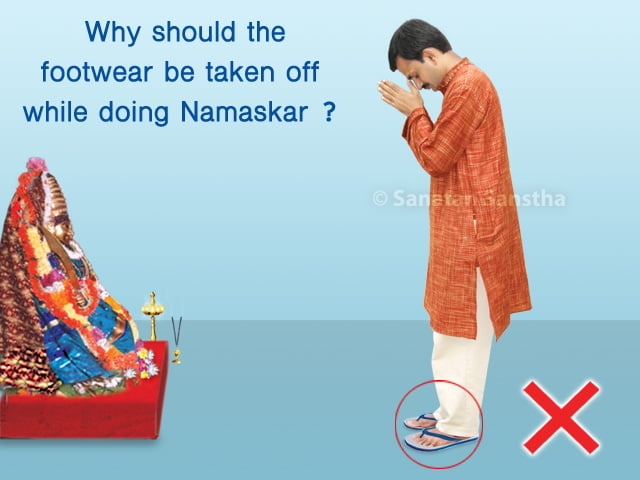 A. While sitting, partaking meals, sleeping, wishing and doing Namaskar to Gurus and other elderly people, footwear should not be worn. – Gautamsmruti 9.

1. Footwear increases the raja-tama components in a person.

2. Paying obeisance (Namaskar) with high raja-tama components will not help in activating the Kundalini (centre in the spiritual energy system).

3. The ability to absorb the sattva component too is reduced, due to an increase in the raja-tama components, leading to little benefit from a Namaskar.

4. Doing Namaskar to a Deity, with footwear on, may also invite the wrath of the Deity.’

Q. Why is it not advisable to hold any object while doing Namaskar? 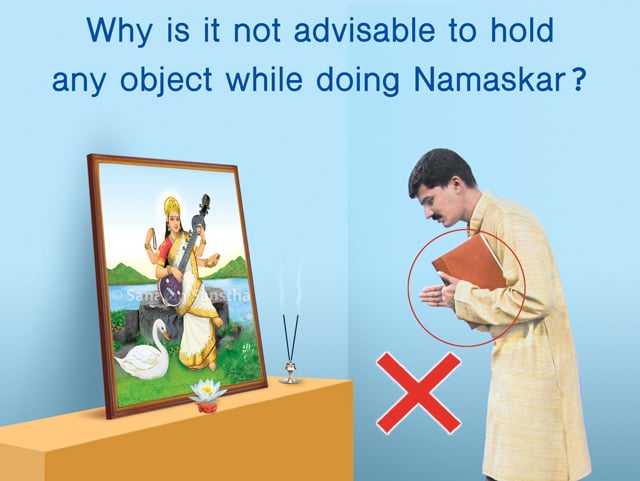 A.1. While doing Namaskar if an object is held in the hands, usually the fingers and their tips are in a curled position and not straight. As a result, the sattva component received is unable to enter the tips of the fingers.

3. If the object in the hand is raja or tama predominant, and if it is touched to the forehead or chest while doing Namaskar, then the raja-tama components from it may enter the body of the one who is doing Namaskar. A. One should not do Namaskar with footwear on, covering the head or holding any objects. (But women should cover their head with their saris and only then do Namaskar) – Apastamb Dharmasutra 1.4.14.19

While doing Namaskar the Kundalini gets activated at the chakra which is touched by the folded hands. This leads to the absorption of the sattva component in greater proportion in the body. Sometimes due to the activation of the Kundalini, sattva component starts entering the body through the head. But at times the distressing energies try to take advantage of this and mix black energy with the sattva component. The potential to activate the Kundalini is higher in men as compared to women. Hence they are hardly affected by this negative energy. Contrary to this, as women are more vulnerable, they get affected by distressing energies to a greater extent and thus they can experience distress. That is why, when doing Namaskar, women are advised to cover their head with the ends of their sari. This creates a barrier between the head and the distressing energies and prevents them from penetrating the body of the woman. However, to some extent this also blocks benevolent frequencies from entering the women. (Benevolent frequencies are subtler than negative frequencies; hence they enter a woman to some extent even though the sari covers her head.) However, the proper posture of Namaskar gives maximum sattva component to an individual and hence women too get required benefits. This shows how God takes care of every devotee. Doing Namaskar without these restrictions is equally effective if the devotee does it with spiritual emotion.