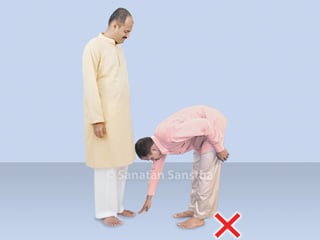 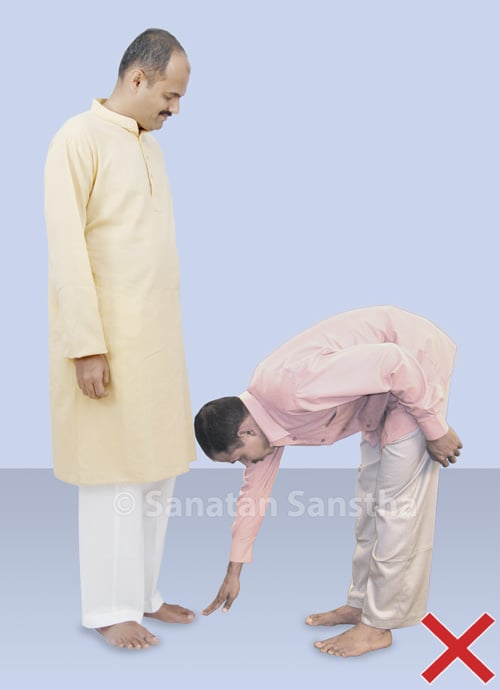 Q. Why we should not do Namaskar with one hand?

Consequences of doing Namaskar with one hand

A. Doing Namaskar with one hand denotes a state of ego. No matter how many births an embodied soul with such ego may undertake spiritual practice, it still does not derive any benefit from it. The efforts of many lifetimes are wasted.

B. An embodied soul with ego has to suffer the rigours of hell.

C. When Namaskar is done by touching the ground in a state of ego, the frequencies emanating from patal (the region of hell) get activated and transferred to the hand. When the fingers touch the Anahat chakra, these frequencies enter through the chakra and spread all over the body. Consequently, distress such as heaviness, restlessness or trembling of the body is experienced.

‘One hand’ touch to the Temple Steps 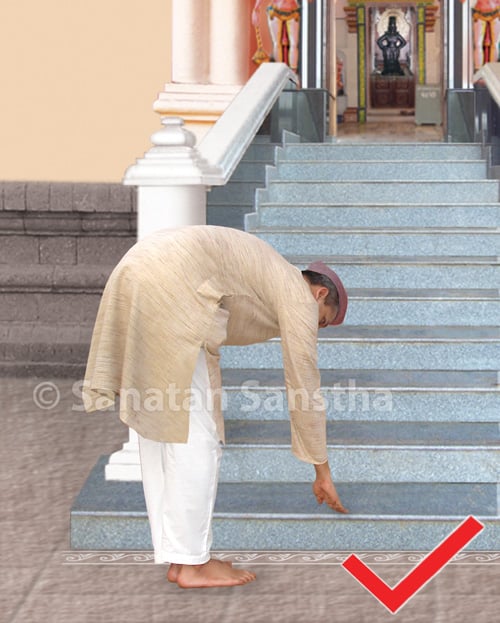 Action: Touch the step with the fingers of the right hand and move the same hand over the head.
Science: ‘The area around the temple is charged with frequencies of Deities which leads to an increase in the sattva component. The presence of Divine consciousness in the area charges even the stairs in a temple. Hence, there is a method of touching the steps with fingers of the right hand and then moving the fingers or palm over the head. Even the dust present on the steps is charged with Chaitanya and so we must respect it and derive spiritual benefit from it. If the embodied soul harbours the spiritual emotion that ‘the Chaitanya from the steps be transmitted all over my body from the dust on my hand’, then it will give increasing benefit to the embodied soul. In addition if the ego of the embodied soul is less at that time then it gives even more benefit. When any action is performed devoid of ego or ‘I’ness it is treated as a ‘non-action’ (akarma-karma).’

Q. Science states that one should not do Namaskar with one hand, whereas the information given by you is otherwise. Why the difference?

A. ‘Compared to other areas, any Temple premise has more sattva component. Any action performed here, even if it is devoid of spiritual emotion, gives the benefit of sattva component. While climbing the temple steps, by touching a step one does Namaskar. This is yet another sattva predominant action to be performed. ‘Climbing’ steps is one of the activities, which increases the raja component in the body. Hence, the raja component is already activated in the body of an embodied soul.

By touching the steps with the fingers of the right hand, the sattva component and peace from the charged premise, get transmitted to the body through the right hand. In addition, from this action, the activated raja component in the body can be controlled through the medium of the surya nadi (Sun channel). This means that, for a moment, the activities of the Sun channel can be stopped. From this process, the embodied soul learns to enhance the sattva component through raja dominant actions. Therefore, it is very essential to perform the appropriate sattvik actions at each corresponding level.